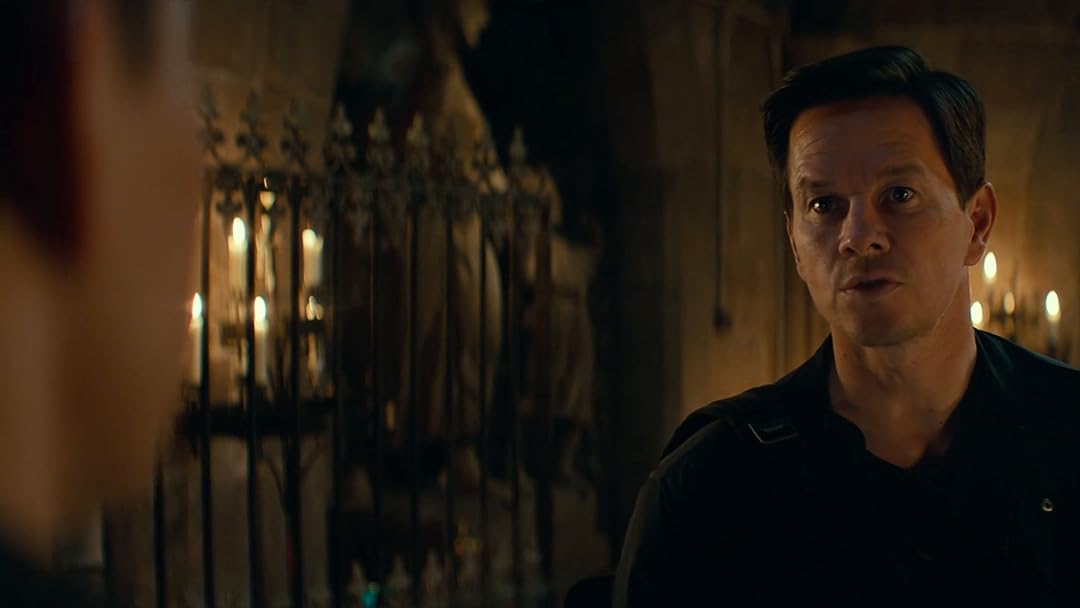 Private Reviewed in the United States on April 26, 2022
3.0 out of 5 stars
Good movie if you dont expect it to follow the game.
Verified purchase
Movie was fine but casting was totally off but otherwise was a good movie. didnt really follow the game other than some parts. But the ending was totally different. Overall was decent.

SPOILERS BELOW THIS LINE.

Ok so I don't get this movie. It's suppose to be a prequel to the games but yet is a mashup of all 4 games together and it didn't even have Elena. I have played all 4 growing up and beat them all and was expecting it to follow the games atleast a little but It didn't even follow the most important parts. This movie is purely about treasure hunting. If that's your thing you will love it. But the games were a mix of Adventures, drama, mistakes, one liners, comedy and a touch of romance between Nathan drake and Elena and also some with Chloe. They could have atleast made the story follow and made it into easily 2-3 movies. If it followed the games it would have been incredible. But usually video games that have movies never turn out to be a huge hit. The only thing this movie had that reels the people in is Tom Holland. Idk who cast mark wahlburg but they should have been fired for doing it. Also Tom Holland was missing alot of what Nathan drake had which is first of all the one liner dry jokes. Just those stupid jokes Nathan drake would make was alot of his character and of course that was missing. Overall this movie I feel was a bust for the people that played the game. But if you didn't play the game it's not a bad watch at all

FredReviewed in the United States on May 15, 2022
1.0 out of 5 stars
Poor Mans National Treasure
Verified purchase
I learned one thing from this movie. Mark Walburg is NOT Nicolas Cage.
I am taking time to write a review which I havnt dont in years , for the mear fact that there is so many things wrong with it that it intrigues me.
I am not a writer but even I could do a bettter job than the writer os this trash.
It looks like it was rushed and the scenes slapped together on haste without any thought because they just wanted to make a quick buck.
I dont remember watchinf a movie where I said as many times as I did thing like...:" Well that doesnt make sense" ..."Thats not possible"..."Wait a minute, werent they just".... "WOW! They put no thought whatsoever in this didnt they" ..."Now we're beyond stupid"..." If they want us to believe that whats next, Is Nathan going to fall from a plane and sprout wings because a special chant he just remembered"
Yes, the writing is horrific, but not as bad as the casting.
I have no Idea what Mark Walburg is doing in this movie in a role that doesnt fit him AT ALL.
Then there is Antonio Banderas who has a few sinister lines and then is kiiled in what I think was meant to be a surprising plot twist , only one problem....at this point NOBODY CARES! As a matter a fact KILL ALL THE CHARECTERS AND END THIS MOVIE.....please.
Even the sub plot ( At least I thought it was a sub plot) was what happened to Nathans brother Sam who disappears from his life in the opening scene for reason I still dont understand)
I did have a small interest in that and couldnt wait for the predictable reunion after Nather believes his brother is dead.
BUT IT NEVER HAPPENS! ....uggg...
Then there is a black woman with white hair ( WOW! SCARY) who is the villian after killing Antonio Banderas, and we are supposed to believe she is dangerous.
Soooo...to convince us she is dangerous they have her favorite weapon as a knife which she clearly has no idea how to use. They didnt even take the time to teach her how to use a knife in a knife fight, so everything she does looks like laugable slow motion.
One review wrote " If you like Indiana Jones and National Treasure you will enjoy this...
WRONG! If you liked those movies you will WANT YOUR MONEY BACK FOR THIS EMBARRESING ATTEMPT TO RESEMBLE THEM EVEN IN THE SLIGHTEST WAY.
BAD WRITING, BAD CASTING, JUST...........................bad.
The only bright spot ( as a child, my mother always told be to look at the positive) if I must name one , was Tom Holland who played Nathan Drake.
The kid can act and prbably has a future if he stays far away from scripts like this.
In summary...
Bad acting, bad writing, bad casting... seems to be slapped together quickly just to make a buck
24 people found this helpful

Real World ReaderReviewed in the United States on May 3, 2022
3.0 out of 5 stars
Wrong actors, thin plot
Verified purchase
I give this movie extra stars because it's glossy, the actors aren't terrible and the plot kind of hangs together. It had some entertaining bits and a decent number of scenes where I thought "that's cool".

The leads are just the wrong people for this. Tom Holland is still being Spider Man (probably not his fault - someone else set up the action shots). But where did this young but scrappy character pick up fighting skills to beat the pros? There's no history or path shown. OK, orphanage - but then what? They give him the power of the Fool (an archetype who succeeds by tripping over his own shoelaces) but to do so without context or explanation leaves the character unbelievable. And maybe I'm being persnickety here, but the lighter was such a key prop/gag it needed to have something special about it - something that explained WHY it rarely worked. Perhaps a secret message hidden inside - something better than just being a crappy lighter. And Mark Wahlberg is just wrong here - just the wrong moves for him. He doesn't play the devil-may-care con man well at all. Good actors but in the wrong roles.

Overall it was good for a rental - but I feel like I wasted my money to buy it.
21 people found this helpful

D. DoyleReviewed in the United States on May 7, 2022
1.0 out of 5 stars
Pathetic
Verified purchase
Perhaps the worst acting by Mark Walberg ever.

This was a flat film - so many deadpan deliveries to mention.

On its surface it would seem like it has everything but I found myself scrolling forward through the boring mass of it at a certain point.

One of the worst films I have seen in a long time - and a waste of Tom Holland’s growing talent. Tom was fine but the directing and script and lousy acting by Walberg made it feel like a high school pirate movie.

No idea how it got so many five stars here - it rated less than 50% on rottten tomatoes.

My 14 year old thought it sucked and my wife could not watch past 20 minutes.
21 people found this helpful

Rish PartykaReviewed in the United States on April 26, 2022
5.0 out of 5 stars
Fun movie!
Verified purchase
I'm a huge fan of the video game franchise and was really excited for an Uncharted movie. I went into it with an open mind and was actually surprised at how much I loved the movie. Is it perfect? No, but it's still really good. I thought Mark and Tom had good chemistry and did their characters justice. I walked away happy and looking forward to the sequel.
21 people found this helpful

Eric SidwellReviewed in the United States on April 28, 2022
5.0 out of 5 stars
Lots of fun
Verified purchase
If you enjoy movies like Indiana Jones and National Treasure, give this one a shot, it is a fun ride.
20 people found this helpful

Mark's reviewReviewed in the United States on May 12, 2022
1.0 out of 5 stars
Bad.. Horrible lines and action that is stupid
Verified purchase
A cheesy movie that never gets off the ground, unlike the 2 Spanish galleons that fly. I'm not sure if the movie is trying to be funny by making a parody of itself. It's like a cheap version of a combination of Indiana Jones movies.

In one scene the bad guy gets killed by the bad girl by slitting his throat... Don't worry it's literally a flesh wound... and he dies in seconds.

LJLeeReviewed in the United States on May 9, 2022
3.0 out of 5 stars
U hate everyone but Tom Holland as Nathan Drake
Verified purchase
Some spoilers so be warned. Outstanding concept, great actors, and I can handle the ridiculousness of the plot including they left the ships in a massive/enormous/ridiculously obvious cave that you can also see from above in a rainforest cenote and apparently no one found them? Over the half a millennia it was there it would be destroyed (especially if you tried to lift it with a giant helicopter that you magically have waiting as if you would know you would need one much less two?). The "plot" holes are enormous as well. In the entire Philippines the three main groups just happen to spot each other the "bad guys" led by Tati Gabrielle as Braddock happens to be staring with a binocular thing just as they zoom by? And Sophia Ali
as Chloe Frazer happens to find them as well even though she was given the wrong coordinates? The worst sin is that the plot is often driven by absolute greed NOT ADVENTURE. The lazy writing has a bees nest of greed buzzing around mindlessly driving all them to stab each other in the back. Why write so lazily and ridiculously? Could have been an amazing adventure story of discovery instead just back-stabbing.
11 people found this helpful
See all reviews
Back to top
Get to Know Us
Make Money with Us
Amazon Payment Products
Let Us Help You
EnglishChoose a language for shopping. United StatesChoose a country/region for shopping.
© 1996-2022, Amazon.com, Inc. or its affiliates