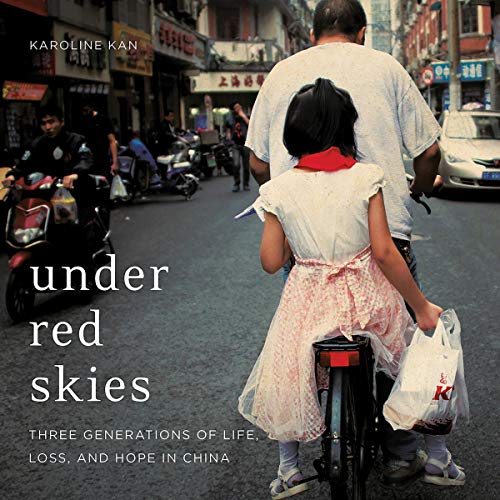 Under Red Skies: Three Generations of Life, Loss, and Hope in China

A deeply personal and shocking look at how China is coming to terms with its conflicted past as it emerges into a modern, cutting-edge superpower.

Through the stories of three generations of women in her family, Karoline Kan, a former New York Times reporter based in Beijing, reveals how they navigated their way in a country beset by poverty and often-violent political unrest. As the Kans move from quiet villages to crowded towns and through the urban streets of Beijing in search of a better way of life, they are forced to confront the past and break the chains of tradition, especially those forced on women.

Raw and revealing, Karoline Kan offers gripping tales of her grandmother, who struggled to make a way for her family during the Great Famine; of her mother, who defied the one-child policy by giving birth to Karoline; of her cousin, a shoe factory worker scraping by on six yuan (88 cents) per hour; and of herself, as an ambitious millennial striving to find a job - and true love - during a time rife with bewildering social change.

Under Red Skies is an engaging eyewitness account and Karoline's quest to understand the rapidly evolving, shifting sands of China. It is the first English-language memoir from a Chinese millennial to be published in America and a fascinating portrait of an otherwise-hidden world, written from the perspective of those who live there.

Your audiobook is waiting!
Learn more about Membership
List Price: $29.65
You Save: $3.71 (13%)
By completing your purchase, you agree to Audible’s Conditions Of Use
Sold and delivered by Audible, an Amazon company

wsmrer
4.0 out of 5 stars An Outsider’s Memoir
Reviewed in the United States on August 27, 2019
Verified Purchase
Taught Economic Anthropology once when it was a new field – no existing textbooks – but what interested me was the impact on traditional cultures as they were introduced to The Market Economy: Brutalizing and Disruptive the short message. Kan’s memoir can be seen in that context as she describes her coming of age and how out of sync with her own family and community; an interesting story if unfamiliar with China but not ‘wonderful.’ It seems to be aimed at an audience rather that bare objectivity.
She is of Millennial generation and that is interesting but a just released memoir by a Baby Boomer that carries the Cultural Revolution and his arrival as a Ivy League professor you may find more rewarding; Out Of The Goby: My Story Of China And America by Weijian Shan.

One correction:*
Karoline was born in the year of the Tiananmen Square Protest and works that item into her story searching for answers; she acquires a Virtual Private Network (VPN) to scale the states’ Great Fire Wall and sees what had been unavailable: the protest and the intervention of the PLA troops battling citizenry armed with stones and Molotov Cocktails around the barricades designed to hinder them toward Tiananmen, untold deaths, but missed no one killed in Tiananmen as armed soldiers closed in Liu Xiaobo, Xu Zhiyong and Pu Zhiqiang negotiated the safe passage of protesters who were still there.
Liu was to win the Nobel Peace Prize while serving in prison for other actions, he died there of cancer 13, July, 2017.*

China has more students studying English that the rest of the world combined (for China always adds zeros). Karoline perseverance and luck turned that into a happy ending. Her acknowledgements recognize Evan Osnos of the New Yorker Magazine and Edward Wong of the NYTimes and many other fine journalists.
What comes next?
4 stars
* See: Chaos Under Heaven: The Shocking Story Behind China’s Search for Democracy by Gordon Thomas.
Read more
2 people found this helpful
Helpful
Report abuse

Global Traveler
5.0 out of 5 stars An Amazing and Important Book for those wanting to Understand Generational Divides
Reviewed in the United States on March 17, 2020
Verified Purchase
I lived in china for 3 years and left without a clear understanding of life in China. I read a review of this book and took a chance. I tore though the book loving every page. I used it as a cultural guide. I wanted to write to the author to learn more. I lived in Tianjin and now split life between Beijing and another small city on the east coast. Looking forward to more.
Read more
Helpful
Report abuse

Rhett Ross
5.0 out of 5 stars An Enlightening Read on China
Reviewed in the United States on April 21, 2019
Verified Purchase
I have been doing business in China since 2002. My current company was acquired by a Chinese SOE in 2011, which has been a great experience in many respects. This book has helped answer many questions I have had during my many experiences in China and in doing business with my Chinese friends. A great rad that I intend to share with my children and friends.
Read more
5 people found this helpful
Helpful
Report abuse

jandk
3.0 out of 5 stars Snapshot of China
Reviewed in the United States on March 22, 2019
Verified Purchase
An interesting read in that it gave me insights and confirmed what I have experienced with the Chinese culture and people. I heard an interview with the author on NPR. It led me to purchase it. It was not as informative as the interview, so one should listen to that as supporting information.
Read more
5 people found this helpful
Helpful
Report abuse

J. Hedges
4.0 out of 5 stars Introduction to China
Reviewed in the United States on July 3, 2019
Verified Purchase
The writing is at times a little stiff (totally understandable from non-native English writer) but on the flip side, this makes it easy to read. An interesting story that needs to be heard. Unfortunately there are not enough young Chinese voices that break through the "great firewall". This book should serve as a good introduction to contemporary China for anyone curious.
Read more
2 people found this helpful
Helpful
Report abuse

huasong
5.0 out of 5 stars A great read.
Reviewed in the United States on May 26, 2019
Verified Purchase
I am a baby boomer and enjoy reading this book.
I myself cam from a rural village and left the village due to admission to a college in a major city. I can relate with the story. This is a very candid story.
Read more
3 people found this helpful
Helpful
Report abuse

elizabeth
5.0 out of 5 stars Beautifully written
Reviewed in the United States on February 23, 2020
Verified Purchase
Beautifully written. Ms Kan is engaging. Her book is about strength and courage. It was an incredibly frank and unvarnished look into her life and the lives of her family. I highly recommend this book
Read more
Helpful
Report abuse

demanding reader
2.0 out of 5 stars Not very interesting...
Reviewed in the United States on December 27, 2019
Verified Purchase
I did not find the author's story to be particularly interesting, and the writing (perhaps at a third grade level) further heightened my lack of interest.
Read more
Helpful
Report abuse
See all reviews

Anuradha
5.0 out of 5 stars A very personal story about struggle and then to reach the life she dreamt
Reviewed in India on February 10, 2022
Verified Purchase
This is my first book review online. I like to read books which are somewhat less popular. I somehow found this book on Amazon deals, ordered it and started reading it.
I must say, if you want to read a book about the ordinary people and their ordinary life, about struggles faced by small town people, about the dark side of big cities, about international relations and their history, and last but not the least, a book which touches you and remains with you throughout, you must pick this book.
It's easy language, made me complete the book sooner than i thought i would.
'Under Red Skies' would always remain close to my heart.
Read more
Report abuse

Kindle Customer
5.0 out of 5 stars Really Excellent.
Reviewed in India on May 12, 2022
Verified Purchase
After a long time, I have got a fascinating, simple and truthful literature. The author informed about her growth, mind and circumstances in a mild independent way. This book is very helpful to understand our neighborhood country China.
Read more
Report abuse

Jacinthe
5.0 out of 5 stars Under red skies
Reviewed in Canada on July 21, 2019
Verified Purchase
fast delivery to my kindle
Read more
Report abuse

John
5.0 out of 5 stars on time
Reviewed in Germany on August 12, 2020
Verified Purchase
on time and brand new book
Read more
Report abuse
See all reviews