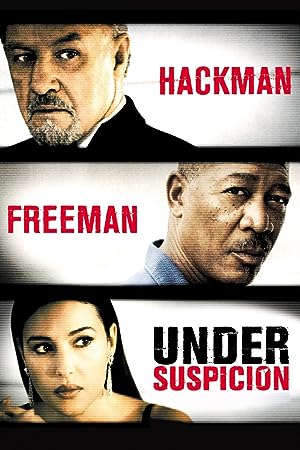 (466)6.51 h 50 min2000X-RayR
A lawyer on vacation in Puerto Rico discovers the body of a murdered teen and promptly becomes the local police's prime suspect. He must convince the cops that he is not the serial killer they've been hunting.

ShopSupervisorReviewed in the United States on April 22, 2016
5.0 out of 5 starsIf you hang to the end, this movie has a BIG impact
Verified purchase
This movie was a pleasant surprise. In the early part, I thought it might be one of those "vanity projects" for Morgan Freeman and Gene Hackman, who produce it and act in it. Things start off a little affected, shallow superficial, with the writing and acting even seeming a little clumsy at times. But in retrospect, that was the nature of the characters' relationships at the beginning of the story.

Let's cut to the chase. There are agendas all over the place. Underlying resentments surface in the course of the movie and true characters are laid bare through conflict among the major players. Roles that are sympathetic in the beginning are decidedly less so by the end. Multiple characters gang up on a character who seems slightly oafish in the beginning but who emerges as the one with the most personal integrity by the end (whether you agree with his values or not). Suffice to say that there is much ambivalence about old loyalties and relationships.

It's a amovie about the things people do to friends and loved ones when personal needs and insecurities get into the picture - and the lengths to which people go to hurt those with whom they once were close, when resentments have festered. Ironically, although both of the central figures voice their belief that they are honest in their actions, their tragic failure stems from their inability to be honest with each other. It's also a cautionary tale about failing to recognize the limits on trauma that relationships can bear and that no matter how much you wish you could change things after the fact, there's a point at which the ties are irretrievably broken. During the course of the story, everyone's past histories with each other factor into the way events play out, and things that happened earlier in the movie begin to make more sense.

It gets intense; it's not an easy film to watch on an emotional level, but by the 2/3 mark, I was completely immersed and couldn't look away. It's difficult to watch the other characters systematically and methodically coordinate to destroy the remaining character (the title of the source book is "Brainwash"), only to sow the seeds of their own destruction in the process. The landscape is littered with emotional devastation at the end; An engaged viewer will share in the sense of desolation. It won't allow you to be a passive observer. Like I said, difficult to watch, but definitely worth it. This movie is not light fare and it will affect you.

Acting, direction and production are all top notch. Gene Hackman is well suited for his role and your attention is focused closely on him at the end. Outside of Melana or Ville Marie, this is Monica Bellucci's best work IMO. Her strengths have always been communicating with her eyes and non-verbal language generally. Opportunites are presented for display of a full palate of postures, body movements and their timimg, etc , and all are exercised. It escapes me how she can appear so vulnerable, vengeful and innocent at the same time.

When the movie was over, I replayed the end sequence four times. I sat and breathed for a while and then watched the whole thing again from the beginning. Knowing what you do at the end completely changes your perspective of things that were said and done earlier. I reflected on this movie for two days, an unfamiliar phenomenon in my personal experience. I recommend this film highly. I had watched a streaming video of it originally, but plan to buy the dvd now.

Susan K. FletcherReviewed in the United States on March 11, 2021
1.0 out of 5 starsBoring and pitiful
Verified purchase
Not even Morgan Freeman and Gene Hackman can save this ridiculous movie. They produced it together. They need to stick to acting. I stuck through it until midway and turned it off even though I’d paid for it. The writing and story line are incredibly boring. Why these two great actors took on this project is beyond me. Surely they don’t need the money. Save yours!
Report abuse

susan c.Reviewed in the United States on October 6, 2020
2.0 out of 5 starsWASTE OF TIME
Verified purchase
It would not took much more effort to add some sort of plot twist and have the killer be one of the other characters. Instead they never show who the killer is. There were various moments in the movie that seemed to suggest the guilt of other characters. Maybe they went over schedule or over budget and cut it short. BOTTOM LINE. WAIST OF TIME! And money. $3.99 rental should be $1.99
Report abuse

FlamingoReviewed in the United States on September 21, 2012
5.0 out of 5 starsRiveting Psychological Drama
Verified purchase
This is not an action movie, but an intense character drama. One thing most people can't understand is how an innocent person can confess to a crime they did not commit. Once you watch this movie, you will understand. It shows the classic technique by which police break down suspects into confessing. It is shocking in its own way. This movie did not get a lot of press when it came out years ago, which is unfortunate. The performances by Hackman and Freeman are spellbinding, among their best ever. This is an uncomfortable look into the dark side of human nature and police work. You won't forget it.
6 people found this helpful
Report abuse

A readerReviewed in the United States on July 12, 2020
5.0 out of 5 starsGreat with old guys
Verified purchase
Gene Hackman - Morgsn Freeman! What more could you want? Actually, I haven't seen it. But my husband loved it.
Report abuse

robert woodsReviewed in the United States on August 9, 2020
5.0 out of 5 starsgreat actors
Verified purchase
an awesome drama movie
Report abuse
See all reviews
Back to top
Get to Know Us
Make Money with Us
Amazon Payment Products
Let Us Help You
EnglishChoose a language for shopping. United StatesChoose a country/region for shopping.
© 1996-2021, Amazon.com, Inc. or its affiliates