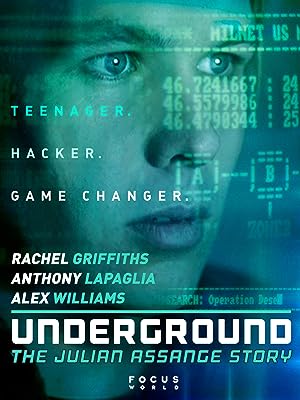 K. Salinger, Holistic Nurse PractitionerReviewed in the United States on July 20, 2016
4.0 out of 5 stars
Really interesting story - made me admire Julian Assange
Verified purchase
Really interesting bio type story - I had no opinion on him either way till watching this and now I admire his resolve and pursuit of justice. I was particularly fascinated to find he was initially raised as part of "the family" aka "Children of God" cult and spent much of his formative years on the run from it with his mother. If you're not familiar with this quite notorious group look it up - a lot of creepy stuff went on. He switched schools several times per year and was also homeschooled often - pretty much a life on the run. FYI - there is a documentary about this group on HBO but it's kinda dreary and leaves off on a negative note.

The story outlines his early years and up until he was initially holed up in the Equadorian embassy in London (and he's still there now, as of July 2016). Check out [[ASIN:B00VO8D13K Citizenfour]] about Snowden if you're interested in tech whistleblowers/hackers. I actually watched that first and it pricked my interest in Julian Assange, as he attempted to help Snowden get out of Hong Kong and to a country of refuge. I haven't (yet) watched the movie about Snowden - CitizenFour is a documentary - but I will at some point I'm sure.

AJWReviewed in the United States on December 28, 2017
4.0 out of 5 stars
Interesting .
Verified purchase
This movie of Assange did not fully go into the details of his childhood, did not explain many things one would wonder of his genius, did not even go into his hacking abilities. The movie ended with him being arrested from his so-called crimes at 17 and noted his paternity suit in words across the screen after his arrest . The film is not boring though seemingly incomplete in many aspects . The acting is great.... the story interesting ....and that’s about it. I was surprised that the movie ended so quickly.

Robyn ForgyReviewed in the United States on August 10, 2019
5.0 out of 5 stars
A truely caring, genius of our time!
Verified purchase
It's being found that Julian Assange was framed by others and this movie is a very close account of his young years! I loved it.
One person found this helpful

Kindle CustomerReviewed in the United States on January 9, 2014
5.0 out of 5 stars
Strongly recommended
Verified purchase
Excellent adaptation of Mendax's part of the book, with additional background added. There is some dramatization as in any biopic, but this is the only movie about Julian Assange that is accurate. It's also an excellent story and you can appreciate it just for that alone. The acting is outstanding, especially young Alex Williams.
5 people found this helpful

T. MuccioloReviewed in the United States on November 4, 2013
5.0 out of 5 stars
Excellent movie!
Verified purchase
Well-done, and informative. Great cast and believable performances. I suggest watching the 2013 documentary "We Steal secrets" as a follow-up to this movie which focuses on Assange's work with WikiLeaks later in his career.
11 people found this helpful

Kati.PeaReviewed in the United States on November 24, 2013
5.0 out of 5 stars
True story reveal heroic actions of a pacifist!
Verified purchase
A rare look at the unvarnished truth behind the sins of the military as captured by the hacking skills and computer genius of Julian Assange, a true hero. Think about it. Do you think he was guilty of anything other than trying to save lives and expose murderous acts? He didn't serve a day in jail because what he did was heroic, albeit against the law. His entire life was devoted to helping innocent victims, women and children, avoid the death grip of the military.

No, it was not the slickest movie, done in the normal Hollywood spectacular fashion, with big name stars and electrifying high tech hijinks. The story needed no slick treatment. It stands on its own without the patina of a Hollywoodesque treatment.

L. M. hummelReviewed in the United States on January 19, 2018
5.0 out of 5 stars
Five Stars
Verified purchase
Perfect just what I hoped it'd be!
See all reviews
Back to top
Get to Know Us
Make Money with Us
Amazon Payment Products
Let Us Help You
EnglishChoose a language for shopping. United StatesChoose a country/region for shopping.
© 1996-2022, Amazon.com, Inc. or its affiliates