You've subscribed to Necromunda! We will preorder your items within 24 hours of when they become available. When new books are released, we'll charge your default payment method for the lowest price available during the pre-order period.
Update your device or payment method, cancel individual pre-orders or your subscription at
Your Memberships & Subscriptions
There was an error. We were unable to process your subscription due to an error. Please refresh and try again. 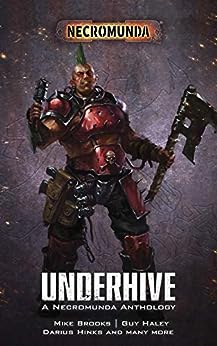 Audible Holiday Deal
Save 46% on your first 4 months. Get this deal
Books In This Series (28 Books)
Page 1 of 1Start OverPage 1 of 1
Previous page
Next page
Necromunda
Alex Hammond
Kindle Edition

Darius Hinks is the author of the Warhammer 40,000 novel Blackstone Fortress and three novels in the Mephiston series, Mephiston: Blood of Sanguinius, Mephiston: Revenant Crusade and Mephiston: City of Light. He also wrote the novella Sanctus. For Warhammer, he wrote Warrior Priest, which won the David Gemmell Morningstar Award for best newcomer, as well as the Orion trilogy, Sigvald and several novellas. His work for Age of Sigmar includes Stormcast, Warqueen and the Gotrek Gurnisson novel Ghoulslayer.

Guy Haley is the author of the Siege of Terra novel The Lost and the Damned, as well as the Horus Heresy novels Titandeath, Wolfsbane and Pharos, and the Primarchs novels Konrad Curze: The Night Haunter, Corax: Lord of Shadows and Perturabo: The Hammer of Olympia. He has also written many Warhammer 40,000 novels, including Belisarius Cawl: The Great Work, Dark Imperium, Dark Imperium: Plague War, The Devastation of Baal, Dante, Darkness in the Blood, Baneblade and Shadowsword. His enthusiasm for all things greenskin has also led him to pen the eponymous Warhammer novel Skarsnik, as well as the End Times novel The Rise of the Horned Rat. He has also written stories set in the Age of Sigmar, included in War Storm, Ghal Maraz and Call of Archaon. He lives in Yorkshire with his wife and son.

Robbie MacNiven is a Highlands-born History graduate from the University of Edinburgh. He has written the Warhammer Age of Sigmar novel Scourge of Fate and Gotrek Gurnisson novella The Bone Desert, as well as the Warhammer 40,000 novels Blood of Iax, The Last Hunt, Carcharodons: Red Tithe, Carcharodons: Outer Dark and Legacy of Russ. His short stories include ‘Redblade’, ‘A Song for the Lost’ and ‘Blood and Iron’. His hobbies include re-enacting, football and obsessing over Warhammer 40,000. --This text refers to the paperback edition.

4.5 out of 5 stars
4.5 out of 5
78 global ratings
How are ratings calculated?
To calculate the overall star rating and percentage breakdown by star, we don’t use a simple average. Instead, our system considers things like how recent a review is and if the reviewer bought the item on Amazon. It also analyzes reviews to verify trustworthiness.
Top reviews

Ross
5.0 out of 5 stars Underhive
Reviewed in the United States on September 17, 2019
Verified Purchase
I've enjoyed the first short story/novella and look forward to the rest. Inspired me to play Necromunda.
Read more
3 people found this helpful
Helpful
Report abuse

Micheal Moore
5.0 out of 5 stars Great read
Reviewed in the United States on July 19, 2019
Verified Purchase
I enjoyed every short story in this book.
Read more
4 people found this helpful
Helpful
Report abuse

Mike
2.0 out of 5 stars They did it.
Reviewed in the United States on July 28, 2019
Verified Purchase
The Sjw's finally weaseled their way into the 40k universe.
Read more
5 people found this helpful
Helpful
Report abuse

JetpackTop Contributor: Star Wars
5.0 out of 5 stars Really well done
Reviewed in the United States on May 3, 2020
I've never read a necromunda book before, but the whining review got my attention. I'm glad it did!

Well worth a read for a WH40k fan.

Alexander
4.0 out of 5 stars Welcome to the Underhive!
Reviewed in the United Kingdom on February 22, 2021
Verified Purchase
This was my first proper trip to Necromunda through the stories. The stories varies in quality from good to not so good. Breaking them up individually like this:

Dirty Dealings: A good story with a twist. 9/10.
Redemption: A good story with a tragic outcome. 8/10.
Burned: Difficult plot to orient in. 4/10.
Red Salvage: A Kal Jerico short with great characters but re-used plot-elements from the Kal Jerico-comic. 8/10.
Death’s Head: Felt like an old western with a gunslinger 7/10
Emp-rah’s Eye: Unclear characters and plot. 2/10.
Once a Stimm Queen: The troubles about leaving a gang. 8/10.
Scar Crossed: A future take/homage to Romeo and Juliette. 6/10.
A Common Ground: Fighting pit, assassinations and connection to a novel outside of Necromunda. 9/10.
Wanted: Dead: A novella about betrayal. Some very familiar elements as perhaps seen in Mission Impossible, but the characters weight up for it. 9/10.
Read more
One person found this helpful
Report abuse

OhHaiMark
4.0 out of 5 stars Great tour of the Hive!
Reviewed in the United Kingdom on July 26, 2021
Verified Purchase
Loved this book! The original Necromunda was the first game I bought from GW back when I was 12 and just great fun to revisit the world. A great mix of tales from the Necromunda world! Also - side note to to those whining about “woke culture” and “SJWs” invading 40k; thanks! Instantly made me buy this book :) Honestly can’t stop laughing at how bent out of shape a few people have gotten over this!! A story with the famously all female House Escher gang features a female couple who occasionally kiss on their merry tour of violence and people lose their mind?!? LOL! No one’s invaded your precious hobby. We’ve been here the whole time. My big old gay self has been rolling dice next to you and painting miniatures better than you since I was a kid and after 25 years I finally got to read a story that acknowledges people like me made it to the 41st millennium too and you chuck all your toys out the pram… good lord… honestly….
Read more
One person found this helpful
Report abuse

Rick
5.0 out of 5 stars A Chaotic Good Time
Reviewed in Canada on June 19, 2020
Verified Purchase
I personally like to think all of the stories within this book take part over the course of the same week. Considering the size of a Hive City they all very well could be happening in the same city and we'd never know which is part of what makes this horrifying, harsh and at times hilarious world work.

Each story tells an interesting self-contained narrative of murder, betrayal and deception but also ones of loyalty, camaraderie and love. The best and worst aspects of humanity are all put on stark display and it's that raw honesty that's really compelling.

The best of the bunch is the first story Wanted: Dead which tells the tale of the downfall of an Escher Gang known as the Wildcats after a heist goes wrong. The characters feel like genuine people and not just stereotypical tough gangster women. The bond that forms between the responsible Jarene, her fearsome girlfriend Quinne and the frankly delightfully sardonic Downpipe Sally is the core of the story and you quickly invest and relate to them. There's is a classic tale of betrayal, vengeance and loyalty to your gang.

Second best and most unique is Emp-Rah's Eye. While most of the short stories have gang members as either the centre or at least part of the narrative in some way this story takes the approach of telling a tale of the tribalistic Ratskins who live below even the Underhive and have their own unique way of seeing the world. It tells the story of Twotails an ancient storyteller of almost 50 years of age recounting his trip to the Hive's surface to inform the Emp-Rah his people yet live. It's genuinely fascinating and made me want to see more of this culture.

Death's Head meanwhile features a smart Goliath, one who can read, facing off against a terrifying gunslinger in a battle of wits and nerves. Shorter then the rest it provides a tense read and a fun glimpse into one of these big meatheads' minds. Believe it or not, it's not all about smashing.

I could go but suffice to say getting to read all of these tales in one place is well worth the value. My one complaint is that most of these stories focus on either House Goliath or Escher. It would have been nice to read a few more stories about the other gangs. Perhaps, should they compile a sequel, we'll get that.
Read more
Report abuse
See all reviews