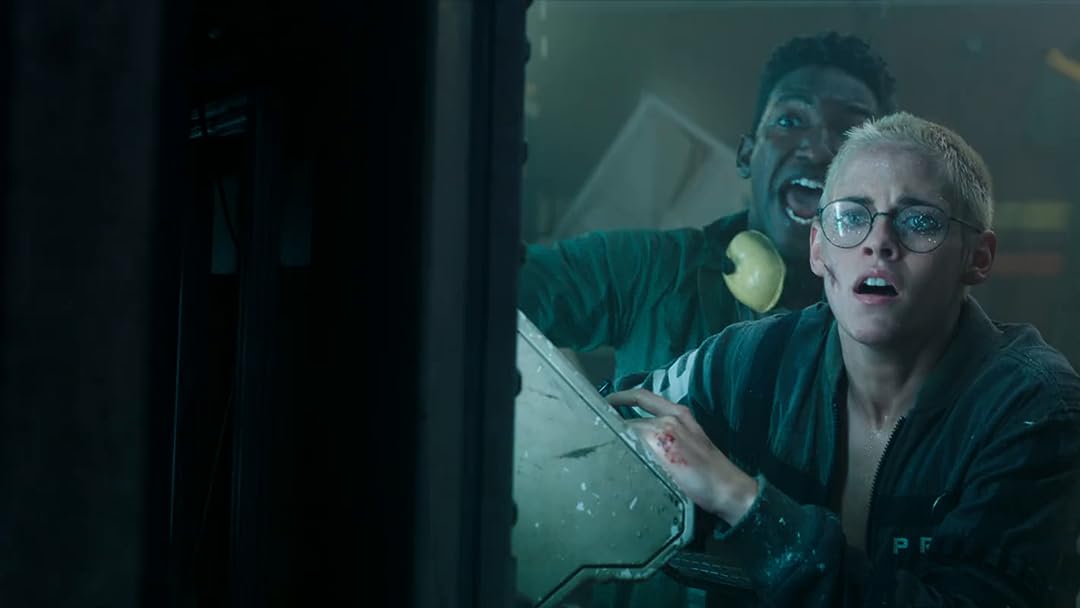 Leaves Cinemax in 5 daysRentals include 30 days to start watching this video and 48 hours to finish once started.

Johnny LopezReviewed in the United States on March 7, 2020
4.0 out of 5 stars
Good fun on the ocean floor
This is a movie that values its audience's time and doesn't screw around with a bunch of fluff. Within two minutes of the start we're blown into the action and racing against time for survival. We're harried and scraped through increasingly perilous situations, dire fates looming centimeters away from us as we try to figure out what's happening.

But then the twist.

And I won't spoil it, because I wasn't expecting it. But as a fan of movies who 'go for it' and aren't afraid to get weird to tell their story...this movie gets WEIRD.

And it's all over in 88 minutes. Including the Schwarzenegger-esque finale with close-ups and one-liners galore this film leaves you absolutely satisfied at the use of your time.

This movie didn't get half the credit it deserved in theaters. It's The Abyss without extra hour of expository nonsense. It's a kinetic action film that moves its heroes along with the stakes--And then it gets weird and even more fun.

Watch this movie. It's not going to give you a moral, it's not a political commentary, it's just a solid action film.

JJ NapReviewed in the United States on April 19, 2020
2.0 out of 5 stars
Depthless Depths: In the ocean, no one can hear you yawn
Verified purchase
A third-rate Alien knockoff bolstered by surprisingly game on-screen talent and some decent atmospherics. The main issue here is a distinct lack of reason for being — Why are these characters and the barely-alluded-to corporation they work for drilling on this impossibly massive platform in the Mariana Trench? Why do the creatures look exceedingly terrestrial? Why does everyone have to strip to their skivvies to fit into their spac- I mean, *diving suits? Well, because the audience wants to see sparks fly as Kristen Stewart gets battered around by fleshy grotesques in her underwear.

Stewart does an admirable job embodying the Ripley-mold, but her character is paper-thin and leaves little to attach to. Unlike the crew in Alien or any number of recent lesser retreads (like 2017's Life), the supporting characters here lack anything more than a single, perfunctory background motive for even existing. Cassel, Athie, and, surprisingly enough, TJ Miller do what they can to breathe a little life into their poorly drawn roles, but they never feel like people because they're never given an adequate chance to flesh themselves out.

William Eubank's direction is similarly frustrating. His earlier work in 2012's The Signal was, at least visually, sensuous and intriguing, but here we see him recycle and often misuse the same tricks he used in that film, only with a much, much larger budget. Prepare yourselves for needless slow-down effects, too many mid/close ups, and largely unintelligible CGI set-pieces on the ocean-floor. To call the editing choppy would be an understatement, while admittedly pretty fitting; nearly every aspect of the film, from the action sequences to the story-telling at large, is hindered by what I can only assume was a slapdash effort to salvage a shipwreck of a production. You know you're in trouble when TJ Miller is the highlight of your movie...

On the plus side, Underwater features inspired (if completely unrealistic) set and costume design — I love the armored, space-esque industrial diving suits, in particular. The cinematography is generally fine outside the muddied action set-pieces, and the concept across the board holds a lot of potential, albeit potential that's been delivered far better in the decades prior to this release. Overall, though, Underwater is far too light to stay at the depths it aims for.
78 people found this helpful

Paolo BelfioreReviewed in the United States on April 14, 2020
4.0 out of 5 stars
A love letter to Alien
Verified purchase
I really enjoyed this film. Stewart put on a hell of a performance. And the design of the movie was a visual treat. Yes, the are borrowing from Alien. But I don't think they were ever trying to hide that.
67 people found this helpful

Samurai KenReviewed in the United States on April 17, 2020
5.0 out of 5 stars
Much better than many expected...
Verified purchase
This is a tense movie from start to finish... the acting is good, the enemy is mysterious and the sense of being closed in is real. There is no over-reliance on supposedly smart characters making dumb choices, which is nice.

Further, this is a movie that just doesn't have any social axes to grind. It isn't a thinly veiled political "commentary" which is VERY rare right now. It's just a monster movie... imagine that!

Side note: It's also one of the best Lovecraftian movies you'll come across. It sits perfectly within that universe.
59 people found this helpful

Kindle CustomerReviewed in the United States on April 14, 2020
5.0 out of 5 stars
Love it!!
Verified purchase
This movie allowed us to see, what we already knew! That Kristen Stewart is a fantastic actress that is often overlooked or prejudiced against. She along with the other cast delivered a great performance .
59 people found this helpful

ChrisReviewed in the United States on April 15, 2020
4.0 out of 5 stars
Great watch, hits all the good marks for me as a movie lover
Verified purchase
Heard this movie got some mixed reviews so decided to check it out for myself. Super solid performances by the cast, especially from Kristen Stewart. Just the cinematography and special FX alone in this movie were really good. The story doesn't focus too much in one direction which I personally think was a good thing for this movie. It plays heavy on the suspense factor but doesn't depend too heavy on the creatures and the small twist at the end was really pleasant. Definitely worth the watch. Thanks for checking out my review!
46 people found this helpful

PatrickReviewed in the United States on April 15, 2020
4.0 out of 5 stars
Hollywood returns to its roots.
Verified purchase
The essence of mysterium tremendum et fascinans almost done right. That which is mysterious, tremendous and fascinating all at once. An ode to Jaws and those like it.

The movie wastes no time on buildup of unnecessary details. A couple of key points I'd say it dropped the ball. Namely on reveals going too far. It's easy to screw this up though so it's forgivable. Some other details which didn't make sense which I won't go into here. You'll see!

It didn't flip any tables or stir anything super imaginative. What it does is keep you watching until the end which is good. It didn't go crazy with Mary Sue power or pushing any politics. Just a decent underwater horror flick. It's worth the rental price IMO.
36 people found this helpful

TwReviewed in the United States on April 18, 2020
1.0 out of 5 stars
A fish ran into a wall
Verified purchase
What did the fish say when he ran into the wall? Dam, as in a water dam. That is it. That is the only worthwhile part of the movie. A stuffed bunny provides the only character growth and narrative development. Nothing else matters. The fish and the bunny. Oh and kstew grunts a lot and used to have a dog. There’s a kraken. Baby krakens. Where did they come from? Who knows. What was this movie about? Who knows. Lots of newspapers/clipping in the distant (or near couldn’t tell) future. Gears of war suits make for good scuba gear. Creatures from 7 miles under the sea can not see in the dark.
18 people found this helpful
See all reviews
Back to top
Get to Know Us
Make Money with Us
Amazon Payment Products
Let Us Help You
EnglishChoose a language for shopping. United StatesChoose a country/region for shopping.
© 1996-2022, Amazon.com, Inc. or its affiliates