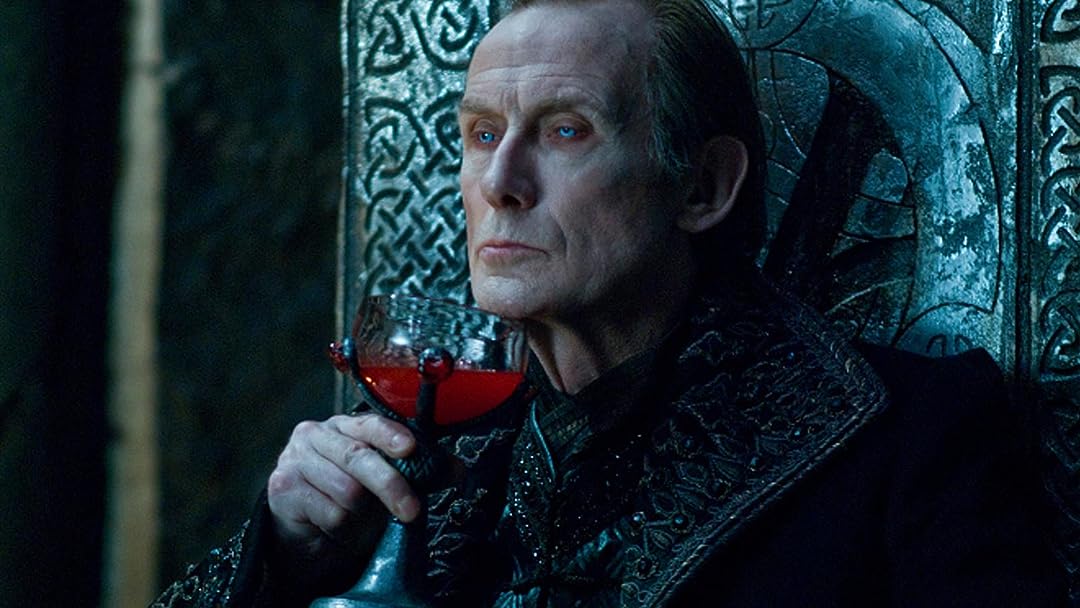 Underworld Rise of the Lycans

(3,362)
6.51 h 32 min2009X-RayHDRUHDR
The prequel story traces the origins of the centuries-old blood feud between the aristocratic vampires known as Death Dealers and their onetime slaves, the Lycans. In the Dark Ages, a young Lycan named Lucian (Michael Sheen) emerges as a powerful leader who rallies the werewolves to rise up against Viktor (Bill Nighy), the cruel vampire king who has enslaved them. Lucian is joined by his secret..

joel wingReviewed in the United States on November 3, 2020
4.0 out of 5 stars
A battle between the haves: Vampire lords vs the have nots: Werewolf slaves
Verified purchase
Rise of the Lycans was the third installment of the Underworld franchise. This one went back to the origins of Lucian (Michael Sheen) and how he became the leader of the Werewolves. The theme is more pronounced than the first movie about the world being divided between the haves the Vampires who are the lords and the Lycanthropes/Werewolves who are the have notes who serve as slaves.

The story of oppressors and oppressed is laid out right at the start. The vampire lord Viktor (Bill Nighy) returning from the original film, bred Lucian to be a servant and keep other werewolves subservient. Lucian is even told to kill other werewolves who are in the wild because they are considered “beasts.” This is a typical tactic to control the minds of slaves to repress them and turn them against their own kind.

Of course no system of oppression can go unchallenged and Lucian eventually leads an uprising which is the second part of the film.

The movie has plenty of action, plenty of werewolves and vampires, and a good message on top which makes it just as good as the two previous releases in the series.
C

JoeReviewed in the United States on November 30, 2020
1.0 out of 5 stars
Not for a thinking man but entertaining
Verified purchase
This is the story of Camelot where the bad guys win. Instead of monarchs being reined in by law, fickle feelings win and "Lancelot = Lucian" supplants King Arthur. Since men watch this to see the babe in leather with so much plastic surgery she can barely move her lips, it is worth remembering she would have dumped his *ss after living in relative squalor for a while. It would have been like trying to please the princess in the story "The Princess and the Pea" where now he has to provide the mattresses. Since they barely knew each other and all they had was their sexual liaisons, it is unlikely they would have found they really liked each other's company. Lucian would have had a few mortal babes in the day light and she would have found out. Then the child would be born and Lucien would become irrelevant to her. This is a story that appeals to the Lucian in all of us but has no "legs". It is not for a thinking man. Imagine the same story without the melodramatic British accents and already the truth begins to show. I like Kate Beckinsale in leather in the other movies too but open you eyes, this story stinks. It is better than one star just because visually the movie is stunning but I think my review is funny and true so I gave the movie one star to get attention. :) I also enjoy that Bill Nighy's name is almost Bill Nigh the Science Guy and they look kind of similar.
3 people found this helpful

Jamey.arnouvilleReviewed in the United States on January 6, 2020
5.0 out of 5 stars
Sonya dies from sunlight with a werewolf/vampire fetus growing inside of her???
Verified purchase
I gave it 5 stars because I love all of the movies. My only disappointment is with Sonyas execution. We learn from the first 2 movies that the blending of the species creates a new breed of immortal has the strengths of both vampire and lycan. It is capable of exposure to sunlight. Following this logic and the fact that she had the Blood of the hybrid coursing through her body she herself should have become the same. The sunlight shouldn't have killed her.
6 people found this helpful

Caroline RushbyReviewed in the United States on April 4, 2020
5.0 out of 5 stars
This is one of the most interesting parts of the franchise
Verified purchase
If you are an Underworld fan, I hope you concur when I say: Wow! Sheen brings Lucian to life with so much passion, so does Viktor when he is overwhelmed by a feeling of betrayal and his sense of duty to protect his coven. So much duty and a war that starts with two people loving each other despite being from different backgrounds. I wonder why this happens so much in the movies? Is it because we secretly like Romeo and Juliet? Underworld is not an easy story to follow for those who have not been part of it for the nearly two years or longer it has been on. This is a must see if you want action and love Werewolves...it is also about finding your true path. Enjoy!
2 people found this helpful

Avid readerReviewed in the United States on January 23, 2021
4.0 out of 5 stars
A worthly sequel
Verified purchase
This is the pre-story, which details the story behind Viktor, Lucian, Sonja and Selene and fills in what was briefly shown in Underworld. It just goes to show that when one breeds a class of servants, it doesn’t always work out well. There are some good fighting scenes, but most of the intense action takes place in the last act. It was in the same dark mood as Underworld, and in pretty well the same color palate. Clearly made to sell tickets, and it fills the bill. Simply fun entertainment, and no need to think while watching.
One person found this helpful

EinsatzReviewed in the United States on October 5, 2017
4.0 out of 5 stars
“We will deal with the wolves as we always have.”
Verified purchase
Another history lesson, this time it concerns Lucian (Michael Sheen) the first werewolf capable of retaining human form, the first Lycan. He is coveted by Viktor (Bill Nighy) as the first of many Lycan slaves that he hopes to press into service as their daytime guardians. At night he expects them to labor, no rest for the wicked. Sadly, things do not go according to Viktor’s plans, as noted in the very first Underworld film. This installment is therefore plagued by a foregone conclusion already known. And unfortunately, Sonja (Rhona Mitra) is not a compelling character. Instead, this film is Michael Sheen’s from beginning to end, with an able assist by Bill Nighy as the conveying vampire elder with Lycan issues he can’t overcome. Viktor makes a dandy grim reaper.
This movie is definitely black and blue and dead all over.

As an action/battle/exploit in the darkest of night, it’s not half bad.
5 people found this helpful

BigDrMReviewed in the United States on December 9, 2016
5.0 out of 5 stars
Excellent Movie: Watch Before Underworld
Verified purchase
Excellent move! I would suggest watching this movie before watching Underworld, for it is essentially a prequel. It sets up who the main characters are, especially Viktor (Bill Nighy) and how cold hearted his character really is (no pun intended after all he is a vampire and I suppose he would have a cold heart?). Michael Sheen gives a great performance as Lucian and Rhona Mitra is beautiful as Sonja; Kate Beckinsale who plays Selene in the Underworld move could be her twin. Truth be told the fist time I saw both movies, about seven years ago, I thought they were the same actresses. I think they look a lot alike, but that's me. Both woman are beautiful and both give excellent performances. Rhona Mitra in Underworld: Rise of the Lycans and Kate Beckinsale in Underworld.
5 people found this helpful

Charity BishopReviewed in the United States on March 28, 2012
3.0 out of 5 stars
The Origins of the Legend
Verified purchase
Humans live under the protection of vampire warlords who have managed to keep the surrounding territory's murderous werewolves at bay through sheer brutality. Once bitten, mortals transform into mindless beasts without the ability to return to their former form... until Lucian is born, a powerful hybrid who can control his shape-shifting at will. Using his genetics, Viktor (Bill Nighy) creates a new breed of werewolf known as Lycans, who serve the vampires as daylight guardians. Enslaved and heavily guarded, the Lycans dream of freedom and a privileged few are trusted intimately by their masters. Among them is Lucian (Michael Sheen), whose loyalty is proven and whose love belongs to Viktor's beautiful daughter Sonja (Rhona Mitra). Spirited and rebellious against her father's authority, Sonja constantly bends the rules and places herself in peril.

In order to prevent her from being killed, Lucian commits the cardinal rule of his race -- he removes his slave collar, transforms into a beast, and defends her. Viktor is infuriated with this obvious contempt for the rules and condemns him to be punished and his privileges revoked. This prompts Lucian to make a bid for freedom, little realizing what -- and who -- is at stake. Audiences familiar with the original films and characters will know various plot twists before they transpire on-screen, but it's also a reasonable introduction to the franchise for new fans, as it establishes all the main threads and individuals who become important later on. I love that we were allowed to see into an earlier era before the Lycans obtained freedom from the vampires. Lucian has never been a favorite but watching his story unfold gave me greater compassion for him. It was also a pleasure to see Viktor in his element, since he makes only brief but impacting appearances in earlier productions. My only disappointment was that while Marcus' storyline was fleshed out in the second film, the other Elder has not been fully explored. Amelia does not even make an appearance, which is a shame.

The purpose of the franchise is to create a surreal existence in which two immortal forces are locked in eternal warfare. This film is the origins of that notorious rivalry and while there are moments of inconsistency with the sequels, it is arguably the best of the franchise. Its setting in the middle ages is more compelling and epic than the modern day interpretation where vampires run around with silver bullets. The costume design is somewhat overlooked but if you care to watch for details you will see some exquisite examples of period work in the luxurious coats and rich fabrics. One friend commented that in some respects, it is the werewolf version of Bravheart and there is a mild resemblance in Lucian's stirring speeches and underdog battle against the establishment ... but the vampires are not one-sided either. Everyone has motivations and reasons for their actions and so it's very difficult to completely choose a side. The look of the film in particular is magnificent -- very gothic and ghostly, from pale vampires to darkened forest lanes. There are no automatic weapons here, just broadswords and a few mean fighting sequences.

This film has the strongest script of the three and the most memorable performances. The true gem is Bill Nighy, whose steely, blue-eyed performance never wavers in the role of a ruthless warlord who would sacrifice anything to maintain power. He might make light of his "hissing" scenes in recent interviews, but it fantastic on-screen. Whatever you think of the franchise in general, you have to admit that overall it's just plain cool.
4 people found this helpful
See all reviews
Back to top
Get to Know Us
Make Money with Us
Amazon Payment Products
Let Us Help You
EnglishChoose a language for shopping. United StatesChoose a country/region for shopping.
© 1996-2022, Amazon.com, Inc. or its affiliates