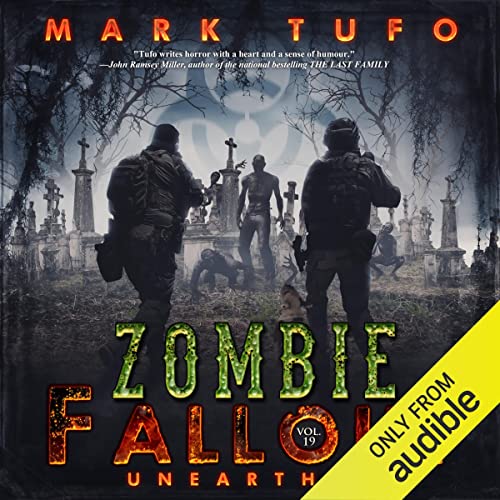 Nigeria. The densely packed cities are abandoned and in ruins. Isolated villages survive behind locked doors under constant threat of a war on two fronts; a war the living cannot win.

Hidden miles into the desert is a secret weapon that, if unleashed, will bring peace—but at the risk of total annihilation. Undermanned and with scant resources, Michael Talbot's squad of misfits is ordered to retrieve classified data of the utmost imperative.

In a concealed laboratory, buried deep underground, the squad discovers a monstrous super-race that will either be humanity's greatest weapon or deliver a blood-soaked end to their existence.

The mission becomes perilous and terrifying; all may not survive.

Above ground, zombies have made startling progress, and the team faces a powerful necromancer who controls an army of the dead. There is a magic here, though, that Michael never dared hope for.

Meanwhile, aboard the floating city the USS Jimmy Carter, a malcontented faction is hatching plans of violence and insurrection. Even within Talbot's own squad there are mutinous whispers. How many lines will be crossed? What is the price of loyalty and honor? Is it the cost of survival?

Join Michael Talbot, BT, and their daredevil team on a gripping adventure to restore the world to the living!

Savana
5.0 out of 5 stars Not the end!!
Reviewed in the United States 🇺🇸 on January 22, 2023
Verified Purchase
Mark Tufo is a phenomenal writer. As he said, this book is just fun.. yes suspenseful, gory, tear causing and laugh inducing fun. Well written as usual and never a lull in the story. Impatiently waiting for ZF 20.
Read more
Helpful
Report abuse

Lis
5.0 out of 5 stars Amazing
Reviewed in the United States 🇺🇸 on January 13, 2023
Verified Purchase
I mean what else is there to say. This series is amazing and I get giddy every time a new one comes out. It’s action packed, funny with characters you completely fall in love with and cry when they die. If you haven’t read it yet seriously what are you waiting for start with zombie fallout 1 and get hooked.
Read more
Helpful
Report abuse

Hotiron
5.0 out of 5 stars Another terrorific read
Reviewed in the United States 🇺🇸 on January 26, 2023
Verified Purchase
Another terrorfic read in this awesome series. Keep them coming Mark, the effort s are greatly appreciated. Love the new characters. Can’t wait for the next one
Read more
Helpful
Report abuse

Kindle Customer
5.0 out of 5 stars Omg I need more
Reviewed in the United States 🇺🇸 on January 14, 2023
Verified Purchase
Another excellent installment to the ZF universe. I absolutely can not wait for the next. The characters are so relatable and real I feel like I know them personally. I never want this series to end. Thank Mr Tufo for this gift.
Read more
Helpful
Report abuse

Magda
5.0 out of 5 stars Another great book
Reviewed in the United States 🇺🇸 on November 26, 2022
Verified Purchase
I never get tired of reading about Mike Talbot, BT, Tommy and the rest of the squad. This one deals with the squad going on a mission to retrieve information on servers that Major Eastman says the scientist need but are located in Africa in Nigeria in JULY, but besides the climate is supposed to be an easier mission, HaHa. As with all the other ones anything that has to do with Mike is never cut and dried. I love Mark Tufo’s extraordinary imagination, it’s never boring and this story has two separate storylines, it also goes into more of their Navy Seals squad mates. The only problem I have is that it is never long enough for me, lol
Cannot wait for the next one and am very glad he didn’t stop at book 16!
Read more
One person found this helpful
Helpful
Report abuse

Kindle Customer
5.0 out of 5 stars More please
Reviewed in the United States 🇺🇸 on January 8, 2023
Verified Purchase
Love your books and your Warped sense humour. You make me laugh ouy loud and bring a tear to my eye.I've read most if not all of your books and I still want more please
Read more
Helpful
Report abuse

Greg
5.0 out of 5 stars A blessing for Thanksgiving
Reviewed in the United States 🇺🇸 on November 22, 2022
Verified Purchase
This book came at the right time. On Thanksgiving evening, while everyone is arguing about politics, the economy, and why my brother-in-law let the mole on his face grow to the size of a hairy silver-dollar, etc, I am going to excuse myself. I am going to tell everyone that I need to do work emails from Singapore and Sydney. (Friday morning in the A/PAC and NOT a holiday there) And I am going to sit in my office and read this book! If it is as good as all of the others, it will be a most welcome escape from family politics on Thanksgiving evening.

Thank you Mark!!!! Happy Holidays to you and yours!
Read more
2 people found this helpful
Helpful
Report abuse

clnowako
5.0 out of 5 stars And so it continues, yes! Thank you Mark!
Reviewed in the United States 🇺🇸 on December 22, 2022
Verified Purchase
As the journey of Mike and B.T. moves thru time, New characters are introduced and their journey brings interesting twists and information into play. An old enemy reenters the story giving way to more storyline and future releases...let's keep it going!! Absolutely love this series!!
Read more
Helpful
Report abuse
See all reviews

Amazon Customer
5.0 out of 5 stars Amazing books
Reviewed in the United Kingdom 🇬🇧 on January 1, 2023
Verified Purchase
I love all Mark Tufo books .He never lets me down.
Read more
Report abuse
See all reviews