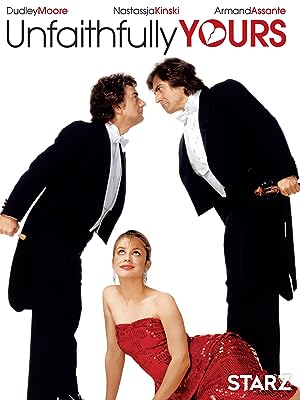 (94)
5.91 h 36 min1984PG
An neurotic, jealous symphony conductor plots an elaborate scheme to kill the wife he suspects of having an affair.

John A Lee IIIReviewed in the United States on April 29, 2006
4.0 out of 5 stars
The Green Eyed Monster Runs Amuck
Verified purchase
Dudley Moore plays a famous conductor recently wed to a young and beautiful European actress played by Nastassja Kinski. It is a good relationship and the couple loves each other until a misunderstanding leads to suspicion on Moore's part. He comes to believe his beautiful child bride is playing around. Worse, he thinks she is playing around with his prot?g?, a notorious womanizer. Its untrue but coincidences mount up to reinforce the idea until he is blind with rage and plots both of their murders.

It sound very serious thus far but remember that the jealous husband is played by Dudley Moore. That means that this is a comedy as he puts his plot into action with Moore's typically inept style. Nothing goes as planned and each instance is usually good for a few laughs.

This film was NOT as funny as I remembered it being when I was a kid but I did laugh and I did enjoy it. Particularly effective is the use of classical music to set the mood throughout. Often, the pieces used are familiar and even stereotypical but that does not stop them from being appropriate or well chosen.

L DARNELLReviewed in the United States on April 19, 2021
5.0 out of 5 stars
Love it!!
Verified purchase
One of my favorite movies that has been very hard to find.
Very grateful to have found it on Amazon.
This movie is a wonderful comedy, brings back great memories, love it!!

Francis A. DabuReviewed in the United States on September 14, 2013
5.0 out of 5 stars
funny and love it!
Verified purchase
I missed this movie sometime in the middle of 1980's..thank goodness it is available at Amazon.com..Dudley Moore is really an outstanding comedy actor--- fit for this movie..he's really really good with his gag of comedic jokes and acting..,likewise with the other stars of this movie...the classical music of the movie is also outstanding (love it too).... the only part I didn't appreciate was the ending.....better buy the DVD and see what I mean, and give your ratings too..enjoy!

Byron KollnReviewed in the United States on March 16, 2006
4.0 out of 5 stars
star-studded remake of a Hollywood classic
Verified purchase
Well-directed, slick remake of the Preston Sturges comedy classic, with Dudley Moore offering a fantastic performance as a neurotic orchestra conductor who suspects his beautiful younger wife of having an affair with a handsome violin virtuoso, then plots their demise. Natassja Kinski plays the wife, looks ravishing if anything else, and has a charming comedy presence. Armand Assante plays the suspected `Other Man', with Albert Brooks and Cassie Yates.

The budget-priced DVD offers fullscreen and widescreen versions of the film, plus the theatrical trailer.
6 people found this helpful

ShaunaReviewed in the United States on March 9, 2007
5.0 out of 5 stars
Musical farce with flair
Verified purchase
This is a movie about musicians that even a professional musician can respect. There's plenty of over-the-top silliness, but none of the usual Hollywood technical fakery. Particularly wonderful scenes: Richard Libertini enacting the murder of Desdemona upon a hapless eggplant; Dudley Moore's murder-fantasy sequence; Moore conducting Armand Assante in a pitiless, pell-mell rush through a concerto; the unraveling of the murder fantasy; and, finally, Libertini hotly cursing Moore's shoes. The best scene of all for this musician: Moore and Assante playing "Czardas" as a violin duet, Moore leaping around the restaurant while furiously trying to spear Assante with his bow.
2 people found this helpful

Java QueenReviewed in the United States on May 7, 2017
5.0 out of 5 stars
Don't miss if you love Dudley Moore!
Verified purchase
One of my favorite Dudley Moore movies. Very, very funny and other than Nastashia Kinski overacting (not that she's much of an actress anyway) - everyone is wonderful in it.
One person found this helpful

KKReviewed in the United States on December 25, 2015
5.0 out of 5 stars
Wonderful music. Hilarious comedy. Lovable main characters.
Verified purchase
Hilarious comedy. Dudley Moore is so endearing. Great selection of the musical pieces. Saw this a long time ago at a friends, so was very happy I could find it on Amazon due to the convenience.

bookfanReviewed in the United States on June 10, 2015
5.0 out of 5 stars
Great laughs for the price
Verified purchase
Great for a good laugh! I watched this with my Mom years ago and we laughed til we cried. Recent view with my husband met with lots of laughter, too! Highly recommend.
One person found this helpful
See all reviews
Back to top
Get to Know Us
Make Money with Us
Amazon Payment Products
Let Us Help You
EnglishChoose a language for shopping. United StatesChoose a country/region for shopping.
© 1996-2022, Amazon.com, Inc. or its affiliates