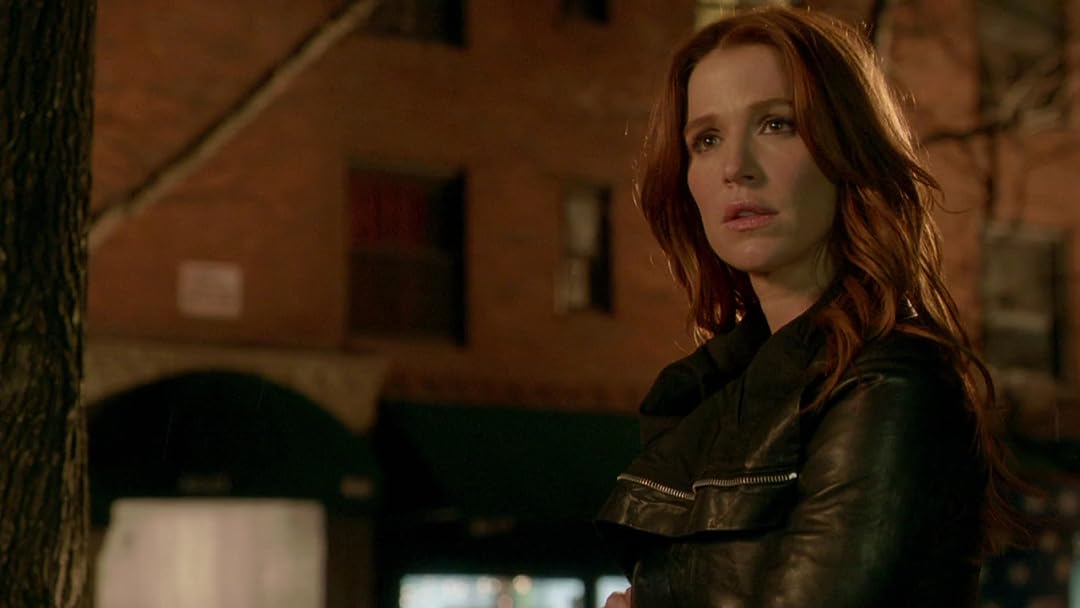 (1,029)
6.72012X-Ray13+
UNFORGETTABLE stars Poppy Montgomery as Carrie Wells, an enigmatic former police detective with a rare condition that makes her memory so flawless that every place, every conversation, every moment of joy and every heartbreak is forever embedded in her mind.

Colonel DReviewed in the United States on April 20, 2022
3.0 out of 5 stars
3.5 stars for this police procedural with a twist
Verified purchase
We meet Carrie Wells (Poppy Montgomery) as she is working at an assisted living facility with elderly resident’s playing cards. It’s immediately evident that Carrie possesses an extraordinary memory as she is counting cards and able to precisely recall details about the clients medications. She is especially friendly with one woman who turns out to be Carrie’s mother who is ironically suffering from Alzheimer’s disease. Later on Carrie is seen gambling at a casino using her gift to make a killing much to the management’s dismay; she uses her winnings to help pay the bills for her mom’s healthcare. Carrie is also haunted by the unsolved murder of her older sister Rachel when they were children; she saw the killer but this was before her ability for total recall had developed and she cannot clearly remember what he looked like. She continues to work on this cold case in her spare time. It turns out that Carrie was a cop in Syracuse, NY several years ago and for reasons not immediately explained quit the force and moved to NYC. When a woman in her apartment building is killed Carrie responds and when the police show up it turns out her old boss Al Burns (Dylan Walsh) is leading the homicide detectives. By episode two she’s magically back on the job with the NYPD and a gold detective’s shield.

Some web descriptions of the show state Carrie’s ability is hyperthymesia that allows an individual to remember with precision biographical details of their life. In bonus features they use the term HSAM (Highly Superior Autobiographical Memory). However, this is different than a photographic memory which is more of what Carrie seems to possess in this series; she is able to recall everything that she sees and not just things about her. Regardless, it’s an interesting gimmick for the character and makes her invaluable as police detective. In a bit of stunt casting Marilu Henner, who actually has HSAM, has a role in one episode as Carrie’s aunt; she also serves as a consultant for the show.

Season 1 devotes a good deal of time with character development for Carrie’s co-workers in the NYPD and we get to know Nina (Daya Vaidya), Roe (Kevin Rankin), Mike (Michael Gaston), and Tanya (Britt Lower), a nerdy young forensics techie that has a thing for Roe. They are a likable bunch but apparently not likable enough because for S2 Carrie and Al are transferred to a special task force in Manhattan and leaving behind their pals in Queens. Abandoning the original supporting cast and essentially starting over suggests desperation on the part of the show runners and sagging ratings. Also the plotline about Carrie’s mom just fades into the background after the earlier episodes and we never see or hear about her again. OG SNL alum Jane Curtin joins the cast about midway through as a crusty medical examiner that does make the transition to S2, and it looks like Tanya gets a couple more appearances before she’s dropped.

A big problem for me is Carrie’s relationship with Al. Dylan Walsh is 9 years Montgomery’s senior in real life but he looks older. Worse than the age difference is that he’s her superior; we see in flashbacks to their days together in Syracuse with them making out in a car while on a stakeout and other inappropriate behavior. It’s clear he still has feelings for her and wants to get back together; and she wouldn’t get away with the antics that she pulls that would normally get her fired if she hadn’t slept with her boss. There’s a reason for regulations against fraternization and this show illustrates why very nicely. I also didn’t feel like Montgomery and Walsh had much chemistry so the relationship felt contrived.

Ultimately, Detective Wells is insubordinate and reckless and you know in nearly every episode she will have a conflict with someone and the climax will involve Carrie once again putting herself in jeopardy by taking ridiculous chances and failing to follow protocol, only to be saved at the last minute. Honestly, despite her special ability I don’t know that she’s worth the trouble. She comes across as someone who has gotten what she wants her entire life because she’s “hot” and believes the rules don’t apply to her.

Speaking of “hot”, it has to be acknowledged that Poppy Montgomery is an extremely attractive young woman. That being said, the show exploits their star by dressing her in clingy, low cut tank tops, (or clingy, gauzy sweaters with sleeves that are too long by about 3 inches), super tight jeans, or the occasional form fitting mini dress- she’s definitely easy on the eyes but it feels excessive at times and doesn’t the NYPD have a dress code for detectives? Nina seems to have figured it out, but she was never #45 on Maxim’s “Hot 100” either so I guess that influenced the wardrobe choices.

My many criticisms aside; I have to admit that the murders and the procedural elements to “Unforgettable” were intriguing enough to hold my attention. With some reservation I’ve ordered the second season and will give it a try. This is a show that was canceled and revived twice (with shorter seasons) before finally being ended for good and I’m sure there’s a reason for that which I’ll find out soon enough.

HopeReviewed in the United States on October 6, 2014
4.0 out of 5 stars
Unforgettable, Season 1
Verified purchase
Although i enjoyed most aspects of this show, I didn't go for Season 2 because the main female lead is too smart ass for me. She always goes her own way, no matter how it might affect the other people she is supposed to be teamed with or how much danger she creates for herself by this behavior. I would say "not a good team player, does not work well with others" sums her up pretty thoroughly.

She is tough and capable as a character, but this one aspect of her personality is such a turn off for me because of its consistency and foolhardiness, I have decided to forgo the rest of the series. If you don't mind this type of performance, then the other aspects of the series, such as the writing and the stories each week are engaging.
28 people found this helpful

Wyoming readerReviewed in the United States on May 4, 2019
5.0 out of 5 stars
Good tv series--great cast.
Verified purchase
The writing and acting are superb. No four language or extreme violence. I always liked Poppy Montgomery when she was in Without a Trace, but she really shines in this show. I liked it so much that I bought Season 2. The extra features are well worth watching, too.
9 people found this helpful

Ted CohenReviewed in the United States on June 22, 2015
5.0 out of 5 stars
An Amazingly Unusual Police Show
Verified purchase
This is an amazingly entertaining, captivating and unique police show that could also be called a science fiction show. Poppy Montgomery plays a police detective who has a unique ability that not only allows her to solve crimes, but thanks to her unique ability, allows the viewers to get to know her as a person.

In a typical police show the investigators little by little narrow down the list of suspects using logic and interviewing possible perpetrators, until finally the evidence leads to an arrest, but we rarely get to know anything about the investigators as people. In this show, we get to see how Poppy Montgomery’s character figures out who the guilty party is by using her unique, science fiction ability and her intelligence to eliminate suspects until she zeroes in on the guilty party. Even better, along the way, we get to know her as a person.

Anyone who has seen Poppy Montgomery in the first two seasons of Without a Trace walks away from the show without knowing anything about her character. Like the other detectives on Without a Trace she is simply reciting lines. There is nothing special or remarkable about her. We never have the opportunity to get to know her as a person. On Unforgettable we get to know everything about Poppy Montgomery’s personality which comes to life, which is such a pleasure. She actually becomes a real person on this amazing show, thanks to her unique science fiction ability. She becomes someone anyone would love to know and be with.

The producers of the show did a magnificent job and Poppy Montgomery has the talent to pull it off. This is easily one of the best TV shows I’ve ever seen.

I can’t wait to see the next seasons.
17 people found this helpful

DivascribeReviewed in the United States on October 22, 2015
5.0 out of 5 stars
Enjoyable crime series
Verified purchase
This crime series is based on an unusual premise -- there's an NYPD detective, Carrie Wells, who has a faultless memory. She can remember what happened on a particular day years ago, and she also can remember tiny details from crime scenes. That makes her a whiz at solving murders. She's working for her former boyfriend, with all the expected awkwardness that involves, and she's still trying to solve the murder of her sister when they were both kids 20 years ago. While that search is always in the background, each episode is self-contained and has its own murder to solve. Poppy Montgomery is wonderful as the fiery, red-haired Carrie, and the rest of the cast is good as well.
6 people found this helpful

Never1701Reviewed in the United States on May 12, 2014
5.0 out of 5 stars
Interesting concept with a good pace
Verified purchase
Normally I hate cop dramas with an established ongoing storyline especially from CBS. The main character on this show however is interesting and the story has a good pace interjecting moments of her ongoing quest without ruining the pace of the individual episode. Montgomery's main character is anything but infallible both professionally and personally. Although the nature of her perfect memory main undermine the show later on at the onset it is a very fascinating concept sure to make everyone who watches it insanely jealous while still showing that it can erode at her mental stability. Great show to keep an eye on!
10 people found this helpful

B. BrierlyReviewed in the United States on January 8, 2014
5.0 out of 5 stars
glad to have
Verified purchase
Unforgettable was on one season and then disappeared. Nothing was said as to why it left the air and we couldn't figure it out because it was such a good series. The cast of characters was great and the story lines were also great. Then in 2013 it appeared back on the air for season 2 after being off for a year. Then this DVD became available and we bought it. Season 2 puts the main characters in a different situation than season one but it is still a great show. I hope they add a couple of the characters from season 1 to the season 2 or 3. We miss those characters. But other than that we are definitely fans.
7 people found this helpful
See all reviews
Back to top
Get to Know Us
Make Money with Us
Amazon Payment Products
Let Us Help You
EnglishChoose a language for shopping. United StatesChoose a country/region for shopping.
© 1996-2022, Amazon.com, Inc. or its affiliates