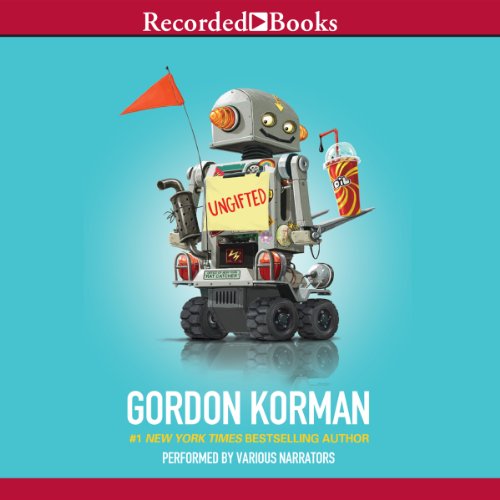 Teens and pre-teens flock to any new offering from New York Times best-selling author Gordon Korman. Told through multiple viewpoints, Ungifted follows Donovan Curtis through his year at a magnet school for gifted and talented kids. Thanks to an administrative foul-up, the decidedly mediocre student Donovan finds himself enrolled in the Academy of Scholastic Distinction. Out of place and out of luck, Donovan joins the robotics team. And while he learns a few lessons from his gifted classmates, he also teaches a few of his own.

Amazon Customer
5.0 out of 5 stars Great book😀
Reviewed in the United States on July 15, 2015
This is an awesome, funny book for middle schoolers. I enjoyed reading it from beginning to end. Donovan Curtis goes through a lot of rough times but, still manages it . I hope that if you get this book you enjoy it. It is awesome
Images in this review

Gonzalo F. Tamayo
5.0 out of 5 stars Amazing book
Reviewed in the United States 🇺🇸 on December 14, 2022
Verified Purchase
This book is a very great read. It presents a story from many different perspectives, centering the story on Donovan who, despite not being as intelligent as the students from the gifted academy, is filled with loyalty and creativity. I particularly liked how Noah, with an IQ of 217, could take test after test and get the questions all wrong. I thought that was a piece of comedic genius from Gordon Korman
Read more
Helpful
Report abuse

Starrett
4.0 out of 5 stars Good
Reviewed in the United States 🇺🇸 on December 13, 2022
Verified Purchase
Pretty good stuff. The only problem with it is that it seems the end is such a cliffhanger.Otherwise it is a good choice.
Read more
Helpful
Report abuse

G. L. Doty
5.0 out of 5 stars Best 'Ungifted Kid Meets Brainiacs Robotics' Book Ever!
Reviewed in the United States 🇺🇸 on July 26, 2018
Verified Purchase
I had just finished reading "The Hypnotists" trilogy when "Ungifted" popped up in an email. I knew I had to buy it - and was definitely not disappointed.
After reading the first four paragraphs, I posted my friends on Facebook (especially tagging my childhood trouble-in-arms) that I am going to enjoy this book. It was about us!
No, Gordon Korman didn't actually write about us - he has no idea who we are - but we were both a Donovan and a Daniel (or both Daniels).
I have no doubt there will be reviews posted about the storyline, character arcs, plots & sub-plots.. But for me, it was where this author took me as I read about this kid everyone considered 'ungifted' because of his head know,edge (or lack of it) yet he had a gift that the best brainiacs couldn't wrap their head around, yet felt it. A gift I discovered in my own life as I grew up. A gift that had nothing to do with my IQ (or lack of it) and everything to do with my heart.
I am 66 years old now and this book made me laugh a lot over antics that only a middle grade screw-up could do. But don't let my age change your mind about reading this one. I have no doubt my grandkids will love it too.
I hope Gordon Korman writes more stories about Donovan. He is a great character, as are his best friends: The two Daniels and of course Noah. I would enjoy reading about their antics in High School some day.
God bless you, Gordon for another amazing story.
Jerry Doty

Akeem Clark
5.0 out of 5 stars Good
Reviewed in the United States 🇺🇸 on June 13, 2022
Verified Purchase
It was a very interesting and funny book with many twist and turns and laughs like with your usual Gordon Korman book.This book has me wishing that I had the money to read the sequel because I know it will be good.
Read more
Helpful
Report abuse

Paige P.
5.0 out of 5 stars Me and my 11 year old loved this book!
Reviewed in the United States 🇺🇸 on June 15, 2022
Verified Purchase
I downloaded this as something me and my son could listen to during the one hour commute to soccer practice. We loved it! So funny and heartwarming, we immediately downloaded the next book.
Read more
Helpful
Report abuse

Kindle Customer
2.0 out of 5 stars Disappointingly Stereotypical
Reviewed in the United States 🇺🇸 on July 2, 2015
Verified Purchase
Gordon Korman’s books for young readers tend to share some commonalities. They feature a spirited protagonist who often runs afoul of parental or (especially) school authorities. Typically, a large dollop of humor is featured as well. Perhaps because of the sheer number of books he has written, he hasn’t always gotten the attention or respect he deserved. It wasn’t until he started venturing into young adult territory that he started garnering awards recognition, for example. As I said, that has always seemed unjust to me. His earlier books are great reads, and not just for so-called reluctant readers. I still collect copies of the unfortunately out-of-print The D- Poems of Jeremy Bloom so that I have a class set should I ever re-enter an upper elementary classroom, even while I’ve thinned the rest of my children’s literature collection.

Unfortunately, Ungifted squanders the good will I have felt towards Korman. It does so by perpetuating myths and stereotypes about gifted students, their parents, their schools, and their teachers. The students who attend a gifted-only public school academy are repeatedly described in negative terms. They lack social skills. They are incomplete without the assistance of a non-gifted boy. These stereotypes perpetuate the myths that the highly gifted have social problems. The research, though, shows that social-emotional issues are no more likely to affect a gifted individual than anyone else; in fact, that is especially true when the students are in an environment in which their academic gifts are not held back. If anything, gifted students at a school for the highly gifted would be less likely to have social-emotional issues than gifted students in a regular school.

Similarly, the adults who believe Donovan doesn’t belong at the Academy are portrayed as villains. They also perpetuate stereotypes including the teacher who says that gifted parents are worse than regular parents. While it is unfortunately true that parents and teachers may be at odds, this statement reinforces stereotypes that gifted students are really just gifted because their parents have advocated for them. Admittedly, in some cases there may be truth to that stereotype. However, in many instances parents don’t advocate for their gifted students. In some cases, it may be because the parents are unaware of the academic needs of their student; in other cases, it may be because parents have come to believe anti-gifted rhetoric that is far too common in American society.

The book also tries to foster resentment between gifted and non-gifted populations. Certainly, the Academy is a remarkable place. However, how many school districts have such a program? How many gifted programs have their own buildings, and how often are those building pristine compared to the rest of the buildings in the district? Perhaps such happenings occur more often in other parts of the US or Canada. However, in the Midwestern states in which I’ve taught, I’ve seen no such dichotomy. In fact, I don’t know that I’ve seen separate buildings for gifted programs except in extraordinarily rare magnet instances. Still, this depiction reinforces the belief that gifted students are getting more than non-gifted students, when, in fact, just the opposite is usually true. Frankly, the book simply feeds into many people’s pre-existing prejudices about the gifted.

The book’s theme may be expressed as the trite cliché that “everyone is gifted in different ways.” Such a statement is no doubt soothing to many persons’ self-esteem. However, it is a sentiment that undermines the importance of helping gifted students to reach their academic potential.
Plenty of protagonists of children’s literature over the years have been unidentified gifted. Where, though, are the protagonists who are identified gifted? The book would have been more effective—and more realistic!—if Donovan had entered the gifted program based on a real test score, a test score that revealed that despite mediocre grades he had a gifted mind, a mind that had been wasted by a lack of meaningful challenge in school. Nearly the rest of the book could have proceeded apace. However, the easy way out is to revel in misconceptions and stereotypes. Unfortunately, that’s what Korman did in what could have been a good book.
Read more
20 people found this helpful
Helpful
Report abuse

Matthew Hickey
5.0 out of 5 stars great
Reviewed in the United States 🇺🇸 on July 10, 2022
Verified Purchase
Great i was full of excitement and i would 100%
Read it again and recommend it and it was just the best
Read more
Helpful
Report abuse

Justin L Grimes
5.0 out of 5 stars Funny!!
Reviewed in the United States 🇺🇸 on June 12, 2022
Verified Purchase
This is a great book that will make the most serious people laugh. I love reading it, and was laughing the whole time. This is as funny as Gordon Korman’s other book. Enjoy!!
Read more
Helpful
Report abuse
See all reviews

Yaser Abolghasemi
5.0 out of 5 stars Click Buy
Reviewed in Canada 🇨🇦 on June 9, 2020
Verified Purchase
its the best book ever so just click buy and dont even read the other reviews. its says i need 20 words to publish it
bye eat play along
Read more
Report abuse