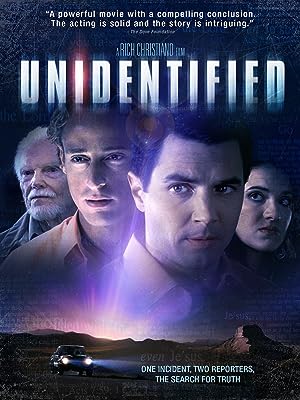 (134)3.41 h 25 min2006PG
A Texas man states he was abducted by a UFO while driving home on a back road one night and two reporters from Both Sides Magazine are sent to investigate. When the man is unwilling to discuss the incident, the curiosity of the editor is raised and he decides to further check into the situation. What transpires is a quest for the truth regarding UFO's.

GrantReviewed in the United States on May 13, 2019
1.0 out of 5 stars
CHRISTIAN PROPAGANDA?
Verified purchase
I just wasted over an hour until the real premise of this christian Propaganda crap started to rear its ugly head and then it took a straight nose dive right into Hell!! If christians want to push their agenda.. No problem but don't mislead people into watching a movie of interest only to redirect it into their own beliefs!!

I'm amused how Americans or "christians" believe their way is the only final solution to all beliefs? What about Buddhist, Muslims, Hindus are they all going straight to Hell? By this ridiculous movie direction.. 1-2 billion christians all go to heaven while the other 4-5 billion will all be ultimately murdered by God and then go straight to Hell?? WTF I admit.. I'm on neither side.. I was raised (by force) Christian but was recently introduced to Muslim and Buddhist religions. While they are all very similar.. at least Buddhist are more open to everyone having their own beliefs and you are not expected to believe their way is the only way!!

Sadly, this is like the 4th or 5th time this month that I've watched movies just like this on Amazon and it's becoming apparent that this is a new trend of christians to push/hide their agenda into movies and shame on Amazon for allowing them to push this crap/agenda!! If a movie uses a misleading title/cover then it should be removed or at a least.. add a disclaimer that there is an alternative agenda!!

Amazon provides users.. Overview, Customers Watched, Cast, Subtitles and Audio Lang. why not Tags that users are allowed to show/indicate the real intentions of a video!! Also why does Amazon not let you see these reviews on your smart TV?? I am a Amazon Prime member (for now).. so that means my monthly fee is going to pay for this type of deception and if it continues.. then, it's time to cancel my membership!!

trish bobaultReviewed in the United States on March 15, 2021
5.0 out of 5 stars
Great movie, Great message!!
Verified purchase
This is a great movie! I love all his movies! This one has a wonderful message of the truth about what is really out there. I became a Christian 7 months ago. My life has changed dramatically since I found Jesus & he found me. I used to dabble in the same things mentioned in this movie. And the same weird stuff happened to me. All of it stopped once I switched to the right side. God's side! This is true stuff my friends. You do need Jesus. He's a really awesome guy! You are missing out not knowing him! It saddens me to hear people talk down & refuse Jesus. All we can do is pray for them & know this movie will change people's lives. 💗 Thank you! Keep up the great work! 😊
2 people found this helpful

T. WilliamsonReviewed in the United States on September 18, 2021
5.0 out of 5 stars
Interesting storyline...right along the great divide.
Verified purchase
I had a look at some reviews before I watched this. Some atheists and so forth appear to be having a hemorrhage over the fact that Jesus was mentioned, and then one character, then, no, two, then, 3 or 4 acknowledged their belief in Jesus. From the reviews, it seems that those viewers either did not watch this movie, or only watched until then (about half-way through.) Too bad, because I observed that the primary atheist character was very accurately and fairly depicted from then on, and argued vehemently and vociferously about his views. In fact, I think that viewpoint was dealt with far better in the film than in the rather illiterate, illogical and emotionalized, knee-jerk 'reviews'. I say 'reviews', because I don't think these writers actually watched through the film, which says ALOT about who they are, and just how sturdy their views actually are. Most Christians in this post-modern, humanist society -- and down through the last 20 centuries have been maligned in one way or another, rather frequently, all around the world (think Hitler, Stalin, Mao, several dictators in Africa, the mainstream media today, etc. And they seem quite used to it, to expect it....Not so with these representative atheists who get so upset--even outraged that people indulge in what they regard as religious fantasies. If they're so sure, why so harsh? If I'm sure there's a check in my mailbox, I don't get freaky and want to kill someone if they say there's not. I mean, why would someone be WARNING people off, waxing so benevolent and yet worried about such Jesus 'propaganda? I found the Christians in this film to be far less than perfect, but surely not dangerous. I found the message to be multi-faceted, and interesting, depending on your point of view. Not the best Christian movie, but worthwhile.

Frederick P. BlumeReviewed in the United States on March 1, 2019
1.0 out of 5 stars
The Supreme Intelligence of all creation populated all but one planet with demons?
Verified purchase
This film is "challenged", even from a Christian perspective. Who presumes to know the mind of God and assume that this supreme intelligence created this vast universe and then populated only one planet and that all other life out there is demonic? It is the height of hubris to claim that, but there is an explaination: those who make such claims are "challenged", themselves.
8 people found this helpful

The VAR-CityReviewed in the United States on January 1, 2019
1.0 out of 5 stars
Wanted Sci-Fi, not Sunday School
Verified purchase
A Religious Bait’n Switch. No sci-fi, no UFO - good dose of self-righteous sermonizing instead of entertainment.
8 people found this helpful

JoAnnReviewed in the United States on May 1, 2021
5.0 out of 5 stars
Great Movie!!
Verified purchase
I finally figured out to look for Rich Christiano films! Not always easy to find true Christian movies that are well done.
2 people found this helpful

MichelleReviewed in the United States on February 18, 2019
1.0 out of 5 stars
What trash
Verified purchase
So now Aliens are the devil and that we are the only ones in the mass space! And that if you don't follow a bible and God you are going to hell that is the message they are sending out! So God that has never been proven to be real vs Aliens that have proven to be real that is the lie not some made up God! Sorry I'll take the Alien over a made up story book
6 people found this helpful

W. MowlesReviewed in the United States on July 27, 2019
1.0 out of 5 stars
Waste of time
Verified purchase
Whole movie was just one big joke by Christians to covert an atheist to Christianity.

Let me save you a 1.5 hours, the atheist was right the entire time this was nothing but a prank, and the joke was on him, only the other way around that the rapture is real. But if the book is so honest ask a Christian the truth and whole story about Adams first wife Lilith.

But the greatest irony in these Christians statements about following the bible is that they themselves are sinning in reading it in English, in that any other translation then original Hebrew is considered reading the devils tongue.
One person found this helpful
See all reviews
Back to top
Get to Know Us
Make Money with Us
Amazon Payment Products
Let Us Help You
EnglishChoose a language for shopping. United StatesChoose a country/region for shopping.
© 1996-2021, Amazon.com, Inc. or its affiliates