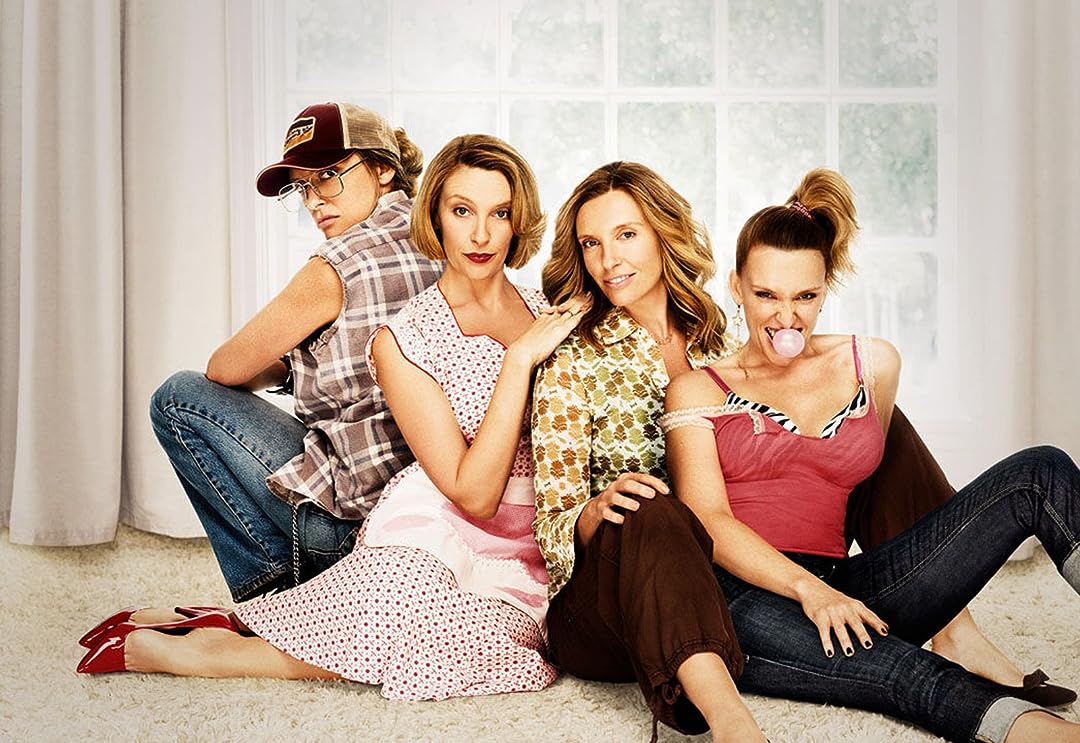 (760)
7.92009X-RayTV-MA
United States of Tara stars Oscar nominee Toni Collette as "Tara," a suburban wife and mother struggling with DID, (dissociative identity disorder), formerly known as multiple personality disorder. Executive produced by Steven Spielberg and created by Diablo Cody, the series delves into how a family copes with the various personalities that may appear on any given day, including "T," a provocative teenager, "Buck," a gun-toting Vietnam vet and "Alice," a Betty Crocker homemaker - and potentially others along the way.

Professeur XavierReviewed in the United States on June 1, 2015
4.0 out of 5 stars
Great Acting, Great Premise, Short-Term Thinking
Verified purchase
Toni Collette has proven herself over the years to be a solid actor with an impressive range. I have seen her play comedic, serious, and dramatic roles with the same ease and credibility. I don't believe she's given the credit she's deserved. I imagine that her non-traditional looks are the impetus behind that. Who knows?

Plainly put: Tara has a dissociative personality disorder, better known as having multiple personalities. Hearkening back to the comment about her range, you can see it here. She starts off with three personalities: a hip, school-age girl who competes with the daughter of the family for guys; a redneck, trailer-trash (same difference, I know) man whose primary interests are women and drinking beer, respectively; and a Stepford housewife, complete with anachronistic language and dress styles. She plays each of these individuals perfectly; you don't see a single trace of Toni in them, and you don't see any credibility conflicts due to bleed-overs, that is, when she's the hip youngster, you really believe it, and when she's the redneck, you really believe it. Her face aside, you wouldn't know that the same woman is playing these characters.

The rest of the family consists of her husband, a business owner of a landscaping/construction company; her daughter who is positively obnoxious and self-entitled; and her son, who seems like he's the son of the Stepford housewife personality--he's put-together, well-spoken, nerdily dressed, and domestic. (He makes dinner and enjoys baking.) Oh, and he's gay, but it's not so much of a focus. Then there is Tara's sister, who can be described aptly as a walking, roving mess who has self-confidence issues and trends toward promiscuity. (She even offers to snatch up Tara's husband from her.)

Pretty simple: a family dealing with a matriarch that doesn't quite fit the typical matriarchal role because of her disparate personalities, two of which are impressively disruptive and embarrassing. The shenanigans affect the family in different ways even though it's clear that they're used to disorder. The antics bleed over into the school lives of the children and the work life of the husband.

Dissociative issues aside, each family members deals with his or her own issues. The self-entitled daughter is constantly trying to seek her independence through finding a job, sleeping with guys, and drinking or snorting anything she can get her hands on. The father is remarkably played and shows both resignation and maturity in dealing with his wife's issues. He's very laissez faire and rolls with the multitude of punches thrown at him and the family.

The son, Marshall, is played well. He has the underpinnings of a complex character, but he never arrives there. The directors keep it simple with him. What should be applauded is the fact that his sexuality wasn't the thing that ruled his life. There is an arc in which he falls for a fellow student who is bisexual possibly, but more likely confused. Other than that, he deals with bullying and life with his unpredictable mother. Again, well-played and simplistic.

When reading the show's story before watching the first episode, I found the story to be compelling, but I didn't see it as something that could be sustained on a long-term basis. In other words, there is only so much that you can do with different personalities, even if it's three of them. (She later develops two others.) And this is where the show encounters problem inevitably. By season three, they had run out of ideas, so they started haphazardly injecting new elements into the plot, hoping that something would stick. It didn't.

For example, at the end of season two, she develops an animal personality, essentially a feral creature that has a penchant for urinating on people and inanimate objects. There's a small arc surrounding how this animal came to be, but you really don't hear much about it after a few of the first episodes in season three. It was like they put something new out there for the sole purpose to see if people would bite. If they did, they could then build a greater arc around the character. If they didn't, they'd move on to something else.

And that's just what they did. They introduced yet another character, a psychologist who is intelligent and the most self-confident of all her personalities (called "alters" in the show). But it wasn't a character that stuck, so they dropped her and moved on to something else. The show was getting embarrassing and desperate by this point.

I can't even recall anything from the final season even though I watched it, so that tell you how silly the entire production got.

The show was good despite the downward fall near the end, a fall that deserved to be put out its misery. If you want great acting, a decent plot, beautiful settings, and interesting characters, you'll find it here. Just don't plan for it to last, because it won't.

SuzyQReviewed in the United States on November 9, 2015
4.0 out of 5 stars
A "Love Story"
Verified purchase
Make no mistake. This is not a comedy, although there are humorous parts-----just like real life! This is a story of a family and how they cope (or do not cope) when the only thing that is predictable is that one key person( that affects their lives) is unpredictable. You can gloss over the seriousness by calling Tara's morphing into various personalities a "disorder," which would be a disservice. The impact on almost everyone whose lives she touches, can be totally breath-taking at times, reflecting back to us what many families have and are dealing with everyday when a loved one suffers from any form of mental illness. While there are only three seasons, the ultimate definition of what "Tara" is about, is that it IS a love story, as their son Marshall realizes. But it is just not a love story of Tara and Max; it is the love story of family, friends and strangers who keep providing acceptance, forgiveness and understanding to and for the person who needs it most. While Tara cannot seem to "pull herself together," she is the fertile ground that encourages others around her to be the strongest, best, and most enlightened any person could hope to be---making this a better world.
2 people found this helpful

Mc. Reviewed in the United States on December 24, 2020
5.0 out of 5 stars
Love this show
Verified purchase
This show is one of my favorites! I absolutely loved this show when it was on and I've enjoyed rewatching it multiple times. Toni Collette is amazingly talented. Keep in mind, it is a twisted dark comedy/drama that may not be enjoyed by anyone too sensitive. I owned the entire series years, but my first season went missing so I was very happy to find it for a good price. Arrived undamaged and appears to be in good condition.
One person found this helpful

HopeReviewed in the United States on October 31, 2016
5.0 out of 5 stars
Such a Great Show
Verified purchase
I don't watch much tv but I decided to see what this was all about. It looked interesting when I was browsing for something to watch. Once I started watching it , I couldn't stop. Tara's personalities were all opposites and very entertaining. With every episode I watched I wanted to watch the next right after another. Once I got to the last episode I came to realize there were no more episodes left. I saw that it was cancelled. Talk about very disappointing. But I really enjoyed watching what I did and all in all I give this a BIG Thumbs up!!!!!

Heather B.Reviewed in the United States on May 24, 2016
5.0 out of 5 stars
Suprisingly Good!
Verified purchase
Toni Collette is remarkable! The show is based around a woman who suffers from Dissociate Identity Disorder (DID), formerly known as Multiple Personality Disorder. The main character is Tara, a married with two children woman who has recently gone off of her medication. She has suffered a trauma that she cannot remember and it plays out in the alter egos that are there to protect her from the pain of the trauma. As she transitions into her alter egos, it is very believable that they are a separate identity with multi-faceted characteristics. The supporting cast is great! I especially love the teenage angst ridden son. His story is very relatable for the younger generation. I am half way thru Season 2 and I can tell you that once you start watching, you won't want to stop. It's only been 2 days since I started....

Courtney GardnerReviewed in the United States on January 16, 2016
3.0 out of 5 stars
Pretty good okay show
Verified purchase
The show is kind of creepy yet surprising entertaining. It has some relatable issue with unique takes. Each personality is.... interesting, to say the least, and extremely different from each other and the mild mannered housewife, Tara. I give the show 3 stars only bc I've only watched a few episodes and the show, though interesting, is kind of dull. I think I just haven't gotten deep enough in the series yet. I'm sure the more I watch, the more I'll like it.