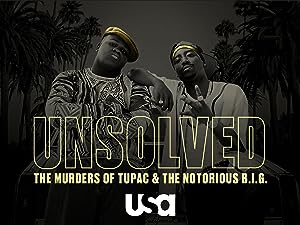 Season 1
(31)7.82018TV-MA
Unsolved: The Murders of Tupac and the Notorious B.I.G. is a true crime anthology series that chronicles the dual police investigations into the controversial murders of two of the rap industry’s most legendary players, Tupac Shakur (Marcc Rose) and The Notorious B.I.G. (Wavyy Jonez).

deeReviewed in the United States on September 14, 2018
5.0 out of 5 stars
Please watch!
Verified purchase
Very interesting view on one of the most epic events in the music history. Something everyone should see. Way more to this story that is disturbing on so many levels.
3 people found this helpful

J J SewellReviewed in the United States on December 29, 2018
5.0 out of 5 stars
The best Tupac and Biggie show this far.
Verified purchase
I really enjoyed this series. I recommend watching Tupac Assasination series, Tupac and Biggie Documentary, The Last Big Night by Gene Deal, and Murder Rap Documentary before watching this series though. It’ll help you follow along and understand the chain of events and how there connected.

Karen ThompkinsReviewed in the United States on March 9, 2020
5.0 out of 5 stars
Exciting to watch Biggie and Pac being solved.
Verified purchase
Great documentary!!!

Amazon CustomerReviewed in the United States on April 4, 2018
5.0 out of 5 stars
Five Stars
Verified purchase
Purchased the whole season after watching the first episode.

AugiReviewed in the United States on January 15, 2019
5.0 out of 5 stars
A must-see for anyone who wants to know the truth!
I first read Greg Kading's book 'Murder Rap' back in 2012, shortly after it was published. Then I saw the 'Murder Rap' documentary, of which was based off the book. Then I recently watched 'Unsolved', which is also based off the book as well.

I was apprehensive of Unsolved due to preconceptions I had from the documentary -- while the documentary was good and informative, it felt a bit lacking in production value and seemed a bit "low budget", if you will.

But 'Unsolved' was different. It featured great cinematography, great casting, great writing, and great acting. And a very high-quality production value. Greg Kading himself even makes a cameo appearance as a background character in the series. I felt the person cast as Biggie, Wavyy Jonez, looked and sounded more like Biggie than the guy who played Biggie in the 'Notorious' biopic. The same can be said for Marc Rose as Tupac compared to the actor who played him in 'All Eyez On Me'. The cinematography was also superior to the disappointing 'All Eyez On Me'.

It's a long 10-part series, which I like because it allows it to be informative & in-depth, as opposed to try to compress everything into a 1.5 hour movie. For those of us who read the book and/or watched the documentary, a lot of this info we already knew and would be anticipating, but there are still many aspects we didn't know and your interest will still be held.

michaelReviewed in the United States on December 24, 2018
5.0 out of 5 stars
mother in law loves old movies
entertainment

Amazon CustomerReviewed in the United States on March 25, 2018
5.0 out of 5 stars
Five Stars
Good show
One person found this helpful
See all reviews
Back to top
Get to Know Us
Make Money with Us
Amazon Payment Products
Let Us Help You
EnglishChoose a language for shopping. United StatesChoose a country/region for shopping.
© 1996-2021, Amazon.com, Inc. or its affiliates