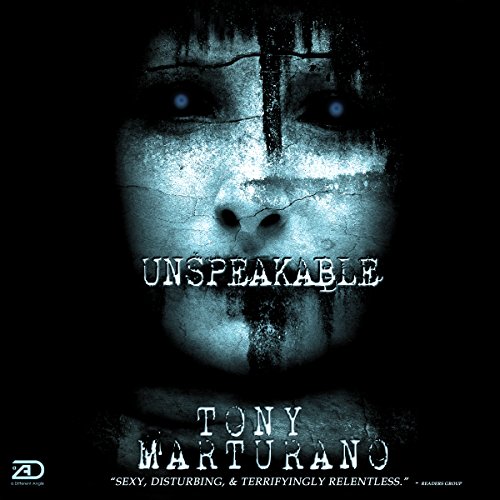 Unspeakable: Some Secrets Will Haunt You

Tony Marturano (Author), Matt Addis (Narrator), a Different Angle (Publisher) & 0 more
4.2 out of 5 stars 217 ratings
See all formats and editions
Sorry, there was a problem loading this page. Try again.

"Fear the living, fear the dead, fear the Unspeakable."

Kenning Hall was more than a country home, it was the family's sanctuary away from the frenetic pace of London, until that day.

What happened that day was so horrifying, so devastating, that the place was left to ruin, until now.

A decade later, 32-year-old Rupert Harrison, the only surviving heir to the Harrison publishing dynasty, has ordered Kenning Hall restored to its former glory.

It's time to go back.

Now, if you think you've heard this story before, think again. This is just the beginning.

Something is waiting at Kenning Hall. Something vengeful, malevolent, and it will follow him home.

This book isn't creepy, it's downright terrifying. Be warned: Daylight will not save you.

Your audiobook is waiting!
Learn more about membership
List Price: $24.95
You Save: $2.96 (12%)
By completing your purchase, you agree to Audible’s Conditions Of Use
Sold and delivered by Audible, an Amazon company

Jake Owens
5.0 out of 5 stars Excellent read!
Reviewed in the United States 🇺🇸 on October 26, 2015
Verified Purchase
Loved this book! From the first chapter to the last I was THERE. The author does an amazing job of painting a portrait with each scene to the point that you feel the hairs stand up on the back of your neck or hear the house settle and wonder if the story is coming alive. Fantastic plot that is full of twists and turns. Very easy to read. If you choose the audio version... you are in for a treat! Who doesn't love a lovely British accent reading you a fantastic story. You won't be disappointed.
Read more
10 people found this helpful
Helpful
Report abuse

D. W. Young
2.0 out of 5 stars Would be much better read if not so many typos and grammatical errors.
Reviewed in the United States 🇺🇸 on August 30, 2022
Verified Purchase
Whoever edited or proofread this novel before release to press should look for other work. In my 73 years on this planet, I have never read any text containing this many errors, I count some 30 at this point and I am only on page 358, and I must say I almost need an English interpreter to get through it. Plus, there are highlighting underlines that make no sense as if placed in someone's kindles to see if they would get thru.

If you like a lot of third-party sex in your reading, then this story is for you. Otherwise, a good, complex plot but please tell our friends across the Pond that our President's office is the White House, and not the Whitehouse. Poor editing job which distracts from enjoyment of the novel. Looks like a rush job to print.
Read more
3 people found this helpful
Helpful
Report abuse

You think you have it all figured out, but you don't. I was left with a dropped jaw and surprisingly speechless! In a majorly good way!
Read more
5 people found this helpful
Helpful
Report abuse

dolores king
5.0 out of 5 stars Wow! Great page turner!
Reviewed in the United States 🇺🇸 on February 18, 2021
After reading some reviews that were a bit critical I wasn’t sure but I said what the heck...and what a pleasant surprise! I love horror and the supernatural in my reading and quality plots aren’t always there...but Marturano really twists and turns the story to keep you guessing...he got me even at the end lol...great storytelling, plot, fully formed characters a touch of horror, and the supernatural, and a whodunit in the same novel! One of the best books I’ve read in a long time..I’m looking for more! I’d read Psychosis and The Haunting and Was intrigued to see what more would come from the author ....honestly Unspeakable was by far the best of the three...try it...you’ll like it!
Read more
4 people found this helpful
Helpful
Report abuse

Amazon Customer
3.0 out of 5 stars Slow
Reviewed in the United States 🇺🇸 on February 5, 2021
Too much back and forth. Slow.
Just couldn't get into it.
Plot to me was missing and seemed misleading in a way
Read more
Helpful
Report abuse

Chelsea Lin
2.0 out of 5 stars Could have been so much more...
Reviewed in the United States 🇺🇸 on April 7, 2022
I wanted to enjoy this, but I couldn't make it to chapter four. The story and characters were good, but there were SO MANY grammatical errors. The overuse of commas is distracting because it adds pauses where there should be none. I don't understand how many books are getting away with this nowadays. I suppose it's because people can publish their own work and they don't care about proofreading before sending out their hard work to the masses, which I just don't understand. I also feel like, between the cover and some of the things said by characters at the beginning, that I already know how this is going to end. Even if I'm wrong, though, I just can't handle the poor comma usage. If you're someone who can zip through a book without noticing distracting grammatical errors, then I'd say give this a shot. I, however, am very glad that I opted to try kindle unlimited for free rather than actually buying this book, because I would have been upset if I'd even spent $1 on it.
Read more
3 people found this helpful
Helpful
Report abuse

Valarie Sullivan
2.0 out of 5 stars Warning! Sexually explicit content!
Reviewed in the United States 🇺🇸 on October 22, 2015
Took one star off for the narrarator. The narrarator is jerky, full of stops and starts. Colorless and bland. Not much difference in voice tone for the different characters. Took another star off for the sexually explicit content. A good story doesnt need the filler that has litlle to do with the story line. If I had known it was in there, I would not have gotten the book. Took another star off for vulgar language. It didnt help the story along.
The premise is interesting, and the bones of the story are good and could be engaging, but the three above items were just too much. I could not finish the book. Should have known after reading that one of the main characters was turned on by the " manly way" the main character took off his shirt. Really? It gets worse from there. I dont recommend this book.
Read more
6 people found this helpful
Helpful
Report abuse
See all reviews

Jess
2.0 out of 5 stars Unspeakable
Reviewed in the United Kingdom 🇬🇧 on September 22, 2020
Verified Purchase
The blurb indicates that the story is about Robert Harrison but after the first few chapters it doesn’t really follow him a whole lot and moves on to other people that seem to not be relevant or connected to the story at all, for example, it’ll have one character for one chapter and then move on and that character is not addressed again at all and their chapter seemed to have no relevance to the storyline. You read from Robert’s view sporadically but it’s mostly from other people. It felt like some of these perspectives didn’t really help the storyline a whole lot. It just ended up being to many storylines to follow and a little unclear on how they were all helping the overall storyline.
I found it to also be too descriptive in some areas, really wasn’t needed to be so descriptive with certain things, it didn’t add anything. Some parts were just not even necessary to the story line. It also felt as though it took a long time to really get In to the story. The whole book just felt a little long winded.
There was a nice twist in the end though.
Read more
3 people found this helpful
Report abuse

ReadandRated
4.0 out of 5 stars A deliciously dark and malevolent read.
Reviewed in the United Kingdom 🇬🇧 on July 26, 2020
Verified Purchase
4 Stars from me.

Having recently had the pleasure of being part of the 'reader's group' for upcoming Novel, Psychosis, I knew I had to set about reading the back catalogue of the ever so talented Mr Marturano.

One of the others at the group said to me 'If you like being scared, you'll love Unspeakable.'

How could I not read it after that?

I didn't know what to expect, I've taken a slightly odd stance recently of not reading the fly cover or a synopsis before starting a book. I am not yet sure if this is a good idea but it's what I'm going with for now!

I found Unspeakable to almost be a book of two parts. The beginning was introductory, scene building, drawing me into the lives and minds of the key characters. Characterisation, as I would fully expect, was excellent. Well defined people came to life on pages before me as I read. The descriptive powers of Tony Marturano are really quite excellent - buildings, rooms, people, sensations and feelings are all clear and distinct.

Just when you get comfortable with this world, the tension changes. Stupidly (or maybe not) for me, I read the majority of the second half of the book at night... I know a book or film as got into my mind when I find that I don't want to switch off the bedroom light and walk 10 feet to bed in darkness!

Did I like the ending?
Read more
Report abuse

Sally-Anne Cullen
3.0 out of 5 stars irritating
Reviewed in the United Kingdom 🇬🇧 on September 20, 2022
Verified Purchase
Endless subplots that fail to weave together in any satisfying way. The ending doesn’t feel like an ending, I kept looking for things to come full circle or even make some sense of the random side excursions of the main plot. Anything of any import seems to happen two thirds of the way through the book, which is tediously long. Seriously in need of editing. There are also words missing/sentences that don’t make sense. It feel like there is a good story in there somewhere but it needs someone the come along and prune way all the extraneous and unnecessary waffle. The story also suffers from an identity crisis; is it a ghost story? A romance? A corporate intrigue? Psychological thriller? I can’t believe I made it to the end, I nearly gave up several times. 3* because there is a good book on there somewhere…
Read more
Report abuse

julie
1.0 out of 5 stars Absolute rubbish
Reviewed in the United Kingdom 🇬🇧 on July 27, 2019
Verified Purchase
I was enjoying this book but getting near the end it was absolutely rubbish, and so much bad spelling, a waste of money
Read more
6 people found this helpful
Report abuse
See all reviews