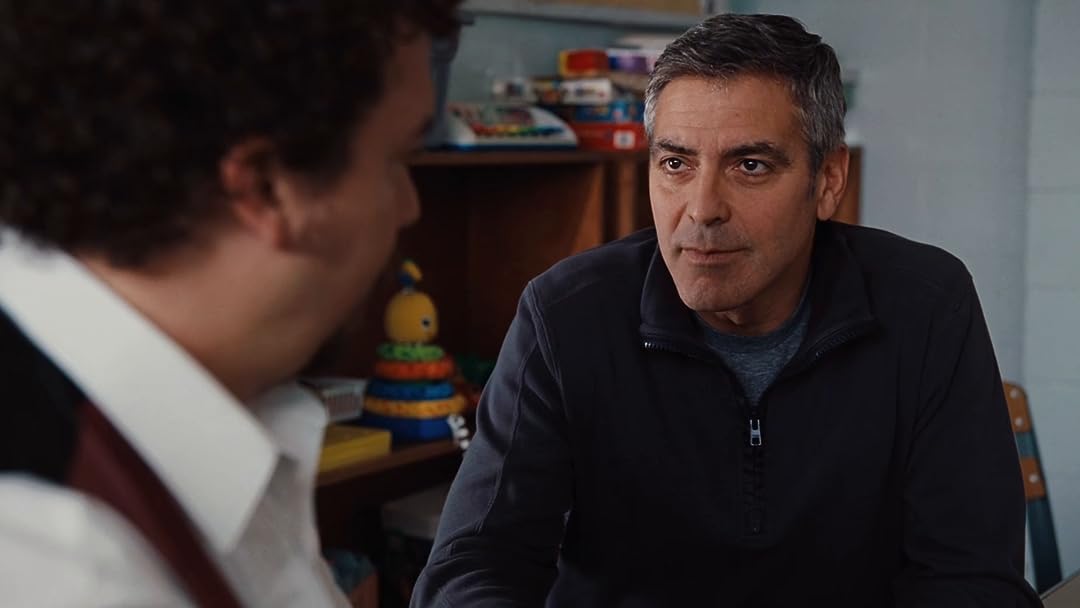 Up in the Air

(2,513)
7.41 h 49 min2009X-RayUHDR
A corporate downsizing expert's cherished life on the road is threatened as he is on the cusp of reaching ten million frequent flyer miles, and just after he's met the woman of his dreams.

Great movie for anyone who wants to be reminded that freedom from attachments isn't true freedom, that happiness comes from shared experiences and love. And no, it's not too cheesy or a chick film. It doesn't end perfectly but still isn't a tragedy. There's a nice balance.

It's a good movie to watch.

Amazon CustomerReviewed in the United States on September 28, 2019
2.0 out of 5 stars
Not as good as Transformers
Verified purchase
George Clooney is handsome but this movie is too phillosofical to catch my attention. I don't like movies that make me think. I prefer movies that entertain and have good things like hot women and fighting robots like Transformers: Revenge of the fallen. I don't like movies that question the status quo of marriage and stuff. I got myself a woman and she is a pain in my (you know) sometimes, but ayee she is my queen and I gotta love her. BUt Clooney is all no marriage and stuff in this movie and happy. That's so weird, then there was this chick he liked but then she didn't like him and then he just flies everywhere. Too much thinking for me. Leave that for the college professors. I need more Transformers.
7 people found this helpful

Delta D.Reviewed in the United States on May 9, 2022
3.0 out of 5 stars
A 5* idea executed badly
Verified purchase
The 5* idea is the George Clooney character's job of being an outsourced contractor undertaking large-scale firings. The shock, trauma and misery those being fired is wonderfully portrayed, together with the cowardice of the employers in outsourcing the task of firing.

What takes me down to 3* is the poor execution of this fundamentally good idea.

2. Over-the-top sentimentality in portrayal of the complicated lifestyles of those spending so much of their lives on aircraft. I was such a traveller for almost 20 years. I could identify with much of what was shown, but the magnificent movie A Five Star Life - released at much the same time - addressed these issues in a much more convincing manner.

On the upside though, the Anna Kendrick character proposes doing the firings by video link. This would greatly increase the capacity of the outsourced firm to undertake the firings and greatly reduce their expenses. The cost, though, would be the even greater reduction of the compassionate element of the firing process.

When I first saw the film, on its initial release, this idea struck me as excessively cold-hearted. The Covid pandemic, however, has made Zoom and its competitors almost mandatory forms of communication. What would have seemed completely unacceptable ten years ago might now be seen as standard practice.

Whilst I admire the foresight shown in the Anna Kendrick's character's idea, I still stick to 3*.

C. C. BlackReviewed in the United States on September 5, 2020
4.0 out of 5 stars
Only Connect
Verified purchase
I saw this movie on its first release in a movie theater. (Remember those? I write in summer, 2020.) I recalled enough of the basic story to give it a second watch. I'm glad I did. It's a richer movie than I remembered. The cast, from leads to supporting players, are uniformly superb: from top to bottom the characters are three-dimensional human beings, not pasteboard cutouts as in so many Hollywood flicks. About the plot you'll learn more than enough from other reviews on this board.

The thing most worth noting, I think: this is a serious drama leavened with just enough good humor to make it watchable.

From the marginal "trivia board" I learned something not at all trivial: director Jason Reitman filmed civilians—non-actors, but real people of different ages, genders, races—who talked before the camera about their experiences of being fired. Inserted at the beginning and later in the film, these vignettes give "Up in the Air" real bite. This is not a slick movie that feeds off people's pain as a story premise: it comes clean with the reality of losing one's livelihood. Carefully edited, the moviegoer has the impression that the civilians are talking across the table to the characters played by George Clooney and Anna Kendrick. Not so: Reitman dignified these people, refused to manipulate their experiences for the sake of cinematic fiction—and he was rightly afraid that the anger and grief expressed would unnerve Clooney and Kendrick. That raises an interesting question: Who's the civilian? Who's the professional? Except for a handful of marquee stars, like Clooney, the vast majority of working actors can't find work. For those who somehow carve a career out of tons of rejection and phones that don't ring, the next week or month or year of being "at liberty"—the old stage term for being unemployed—is a hard reality.

There are many other layers in this movie that make it worth seeing. The tensions and rewards that emerge among professionals across a generational divide. The stories we tell ourselves to make a meaningful life that is shiny but shallow. The fear of commitment. The pain of rejection. Moments of bliss. Rewards from those we thought had dismissed us. Feelings of betrayal by those who haven't a clue they would be thought traitors. The loss of human empathy in an increasingly technologized world. Convincing skeptics of the need for commitment until the convincers believe it themselves. None of these is dropped like an anvil on our heads while watching. Instead, they are more like tiny grenades, planted into the movie's terrain, hardly noticed until they go off.

That's what makes "Up in the Air" worth watching. At surface level it's a romantic comedy, but the currents bubbling beneath are deep, adult, and real.
2 people found this helpful

joel wingReviewed in the United States on August 6, 2020
4.0 out of 5 stars
Man who does layoffs has no home & no relationships suddenly has his life turned upside down
Verified purchase
George Clooney plays Ryan Bingham. His job is to reduce people to nothing; he fires people during corporate downsizing. He gives speeches about having no real relationships and material possessions. He lives off of little since his whole life is travelling from city to city to terminate people and give presentations. What happens when he meets a businesswoman like himself Alex Goran (Vera Farmiga) who is always travelling and they start an affair? Does he change his whole world view? Does he fall in love? Or does he adapt his relationship to his philosophy of less is more? The threat to his lifestyle comes at work as well when they restructure, stop traveling and turn to on-line firing, and with his family.

There’s elements of comedy thrown into this story as well. For instance, after Ryan and Alex sleep together for the first time they say they should do it again. They each bust out their laptop computers and go through their schedules to see when they will be in the same city at the same time so they can hook up again. Unexpected jokes come from when Bingham has to mentor Natalie Keener (Anna Kendrick) in the art of firing people.

It’s a pretty unique story with a unique point of view and yet still draws in the audience.
C
One person found this helpful

SnmReviewed in the United States on October 25, 2020
2.0 out of 5 stars
Annoyingly cliche' right until the end
Verified purchase
It would be refereshing to see someone, a mature individual of a certain age, be able to be content in an unconventional lifestyle. Instead they keep, rather explicitly, telling him that he is EMPTY and LONELY because he does not want a 'fairtayle love'. His protege, that squeaky woman constantly berating him about it drove me NUTS! She sounded brainwashed! This is what happens when we show/read little girls fairytales. They grow up to be codependent people who literally cannot live their lives or achieve happiness on their own. It is a form of mental slavery, if you think about it. This woman actually believes that her accomplishments are nothing without something by her side (her words, not mine). It felt like I was watching some weird propaganda piece.

I am someone in a romantic relationship by CHOICE, not loneliness or desperation. I can go years being single and be happy and sane, because I have self-worth and standards. And I am not emotionally dependent on even my partner now!( He knows and love that.) THIS SHOULD BE THE NORM--NOT THE EXCEPTION!

I can't believe that the main character fell for her nagging and fell for this random hookup. His character is more strong-minded than that. Writers really had an agenda with this one. I'm so glad it didn't end in that cheesy Happily Ever After crap, but at the same time I am mad with his lover, as I would be if the genders were reversed.

This reminds me of the even worse movie, Friends With Benefits were feelings are caught in the end. In reality, not everyone (or even every woman) who has casual sex catches feelings, like and not every heterosexual platonic friendship ends in sex or feelings. If only writers were more original.

I gave an extra star just for the director, who made the brilliantly entertaining Juno and Thank You For Smoking.
Should have watched them instead! Now I see why this was the only free one (with Prime) of the three!

R. CarlsonReviewed in the United States on July 13, 2015
3.0 out of 5 stars
Sparks of brilliance in a sea of "eh...."
Verified purchase
Summary - George Cluney's character is happier traveling than staying home.
This could have been a likable love story and it certainly does have it's moments. It could also have been a story of self discovery, but what's discovered is pretty shallow. Without revealing anything about the ending, it's fair to say it's not happy. There are moments of brilliance in the dialog, like when Cluney walks through the airport describing his life ("All the things you probably hate about travelling – the recycled air, the artificial lighting, the digital juice dispensers, the cheap sushi – are warm reminders that I’m home."). There are other uber-cynical speeches that don't carry as well ("We all die alone"). Overall, though I enjoyed the movie and was glad it did not follow the formulaic hard-bitten-cynical-traveling man-finds-love story-line, I was, however, left with a feeling that there were better ways I could have spent my 1.5 hours of life.
13 people found this helpful
See all reviews
Back to top
Get to Know Us
Make Money with Us
Amazon Payment Products
Let Us Help You
EnglishChoose a language for shopping. United StatesChoose a country/region for shopping.
© 1996-2022, Amazon.com, Inc. or its affiliates