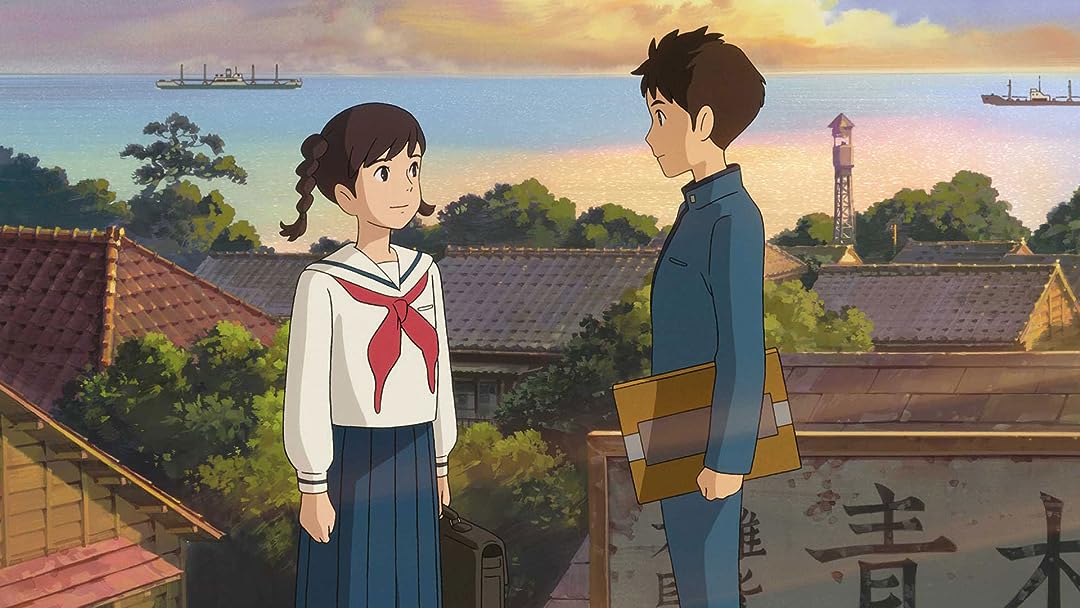 From Up on Poppy Hill (English Language)

(819)
7.41 h 31 min2012G
Yokohama, 1963. As Japan picks itself up from the devastation of the war, hope and change is in the air as the country plans to host the Olympics. Two high school students, Umi and Shun, strike up a friendship, but a buried secret from their past threatens to pull them apart.

P. D. ClarkeReviewed in the United States on October 2, 2021
5.0 out of 5 stars
Pre-order appears rushed but all is well in the end
Verified purchase
This makes absolutely no sense. All of the other Steelbook editions of Studio Ghibli releases have fully functional options for setup of sound and subtitles. The new release appears not to. It is locked into English only even though the setup page shows original Japanese and English subtitles as an option. I simply cannot select anything on the page: the English Audio is pre-selected. Any attempt to select another option kicks me back to the Menu bar at bottom. This will likely be going back. If I wanted to hear the English version I could simply watch it on Prime for free. Very disappointed as it ruins the Steelbook collection which up until now has been handled brilliantly. I should have known there would be a problem when USPS nearly lost the package and shipped it everywhere but my address before making good.

EDIT 10/04/2021: I tried the disc in both 4K players I own, a OPPO 103D and a Sony X1100ES for the zillionth time and finally got it to work in the Sony. It appears the selection changes the shade of gray in the audio listings in a very subtle way (I have to stand right in front of my 75" Sony to see it change) and then one selects the OK button. Only then does the Dot marker moves to your choice ... instead of the other way around. *ss backwards IMHO but at least workable. Still having trouble getting it to work in the OPPO but it does switch about 40% of the time on first try.

As I have never encountered any issues with the other Steelbook editions the rating will be upgraded to reflect the new found operability. There was never any other issue with the onscreen content as expected with a Studio Ghibli. The sound and picture are perfect with no stutters or freezes. And as always, the beauty of the film animation and the gentleness of the Love story within are classic Studio Ghibli.

RDDReviewed in the United States on March 8, 2022
5.0 out of 5 stars
A Good Historical Drama from Studio Ghibli!
Verified purchase
Gorō Miyazaki’s 2011 film, “From Up on Poppy Hill,” adapts a screenplay by Hayao Miyazaki and Keiko Niwa based on Chizuru Takahashi and Tetsurō Sayama’s manga, “Coquelicot-zaka kara.” The story takes place in 1963 Yokohama, Japan amid the backdrop of increasing student activism and local dissatisfaction at the U.S. Navy impressing local merchant mariners to support U.S. military activity in Southeast Asian, particularly with residual bitterness from the Korean War. The plot begins when Umi Matsuzaki and Shun Kazama meet when Coquelicot Manor, the local school clubhouse, faces demolition amid renovations to the city’s Latin Quarter as part of a modernizing effort in the postwar era, particularly with the upcoming 1964 Summer Olympics. A great film exploring a unique era in history. Fans of Anton Yelchin and Gillian Anderson will particularly enjoy this as they provide the English-language voice dubbing.

Eileen ColemanReviewed in the United States on August 1, 2021
4.0 out of 5 stars
CHECK YOUR REGION!!
Verified purchase
From Up on Poppy Hill is one of my favorite Studio Ghibli movies and also my favorite movie directed by Goro Miyazaki. I was very excited to watch it through my DVD player, but unfortunately my region didn't match :( I bought it thinking it was available for all regions. Thank God my laptop could play it, so I was able to watch it! 4 stars because there was no region information in the description and there was no booklet included.
One person found this helpful

Angel phanReviewed in the United States on December 12, 2020
5.0 out of 5 stars
There's an English language movie and a Japanese language. Be sure to buy correct one.
Verified purchase
Make sure you order the English language if you're looking to watch it in English. There's two of this movie out on prime and we accidentally bought the Japanese language movie previously and didn't realize it LOL. It actually says it in bold letters too but just in case ! Great movie, very cute.
2 people found this helpful

Deeba ZargarpurReviewed in the United States on April 1, 2022
4.0 out of 5 stars
So cute
Verified purchase
I really liked this movie (and was SO HAPPY with the twist). The classic Miyazaki art was so soothing to watch, along with the soft and romantic storyline. Really hit me in the feels. I only wish it was a little bit longer. It felt too short for me!

KL MegalodonReviewed in the United States on January 26, 2020
5.0 out of 5 stars
Like a soap opera melodrama but really cute
Verified purchase
My daughter has been obsessed with this movie for years. It’s a simple love story with a touch of self aware melodrama. My daughter was 4 when she first watch the movie and was really glad that she could now watch it on her tablet.
One person found this helpful

Kayla MurphyReviewed in the United States on April 12, 2020
5.0 out of 5 stars
Would purchase again
Verified purchase
I’m happy that I can watch this on my ipad, phone or Tv. Such a lovely movie with amazing artwork & relaxing background music. I think this movie is great for people of love ages.
One person found this helpful

Raina RobertsReviewed in the United States on January 2, 2022
5.0 out of 5 stars
Cute movie
Verified purchase
This was a cute movie. Little weird brother sister thing but it got all cleared up
See all reviews
Back to top
Get to Know Us
Make Money with Us
Amazon Payment Products
Let Us Help You
EnglishChoose a language for shopping. United StatesChoose a country/region for shopping.
© 1996-2022, Amazon.com, Inc. or its affiliates