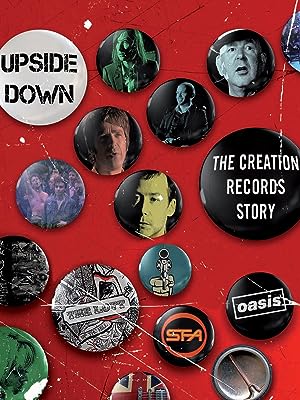 Upside Down: The Creation Records Story

(28)7.21 h 40 min201018+
The story of Creation Records, which produced some of the 20th century's most iconic music. The deals, the drug-fueled rampages and all-night parties - and the day the money ran dry. The rock'n'roll dream and its accompanying nightmares.

AnonymiceReviewed in the United States on April 20, 2019
1.0 out of 5 stars
Confusing
Verified purchase
I'm anti-Britpop (and VERY anti-Oasis) and wasn't into the acid house (rave) scene, so this didn't speak to me very well. I found it very confusing. You have to be a fan of and know all the bands and albums well to follow it, so it's just for fans, although you'd think they would like for people like me to go try out any of these bands I haven't heard. I watched it to learn about a genre I don't follow, even if did involve Oasis (see, I have an open mind!). Lots of giggling about drugs and how great it was, and little real talk about the bands or anything deeper for the Indie movement, so very disappointing. Just empty. I mean, I had fun in the music biz, too, but it's hard for me to giggle about the more "difficult" moments. It's not just about going to the ER unexpectedly, it's about the ruined relationships and health, opportunities passed, and friends lost (dead), which no one here gives any kind of passing nod to. What if they hadn't been a bunch of immature party dudes? Perhaps they would have been able to keep Jesus and Mary Chain (do like them) and Oasis on Creation and handle them properly. Perhaps they would have made everyone in the office rich. Perhaps Alan would have raised his own son. Perhaps perhaps perhaps... But no, let's LAUGH and say how great it all was and act like we have absolutely no regrets.

Ever since the Bay City Rollers were touted as the "next Beatles" or "haven't seen success like this since the Beatles", record labels and the press can't wait to slap that label on any and every pop band that sells a lot. Even at his most sappy, Paul McCartney wouldn't have been caught dead singing Oasis (ok, so maybe he did, but he also collaborated with Michael Jackson (i.e., the current hottest thing). The Beatles were *cool* in a way that you can't define, no matter how pop they were at first. Perhaps because they wrote the genre. There will never be another Beatles. Hopefully someone will come along and change music the way they did, and it's sad that no one has, nearly 20 yrs into the 21st century. I'm still waiting.... Oasis just makes me think that The Young Rascals have come back. So it's that they are how the Rascals would be now, NOT the Beatles. Super Furry Animals do inherit quite deeply from The Beatles, but that doesn't make them the next ones or what they would sound like now, they are 'this' close to a tribute band (and almost close to greatness, if they had taken it to the next step, but they didn't). The Beatles couldn't happen now, anyway, as the record industry never takes a chance anymore. THAT is what was lost when Indie and labels like Creation took a dive, any chance for the industry to take risks and reward experimentation, and we are now reaping the rewards of that with the gagas and googoos. But that isn't even discussed in this film, by the very people who were *there*. They come off as just a group of guys playing record label, who never had thought one in their heads, didn't learn anything, and don't care.

Greg T.Reviewed in the United States on August 27, 2017
5.0 out of 5 stars
A Fantastic Doc, And A Must-See For Creation/Indie Music Fans!
Verified purchase
My wife was in her late teens/early 20's during the height of Creation Records, and is mad for pretty much every band featured in this documentary. Needless to say, she went positively MENTAL when she saw it was available to watch on Prime, as she hasn't been able to find it to purchase on DVD.
I got into some of the Creation bands through her, and enjoyed this documentary nearly as much as she did, lol (In all fairness though, she's the Creation/British Indie nut in our household, more so than me). The interviews are great, and it's a really enjoyable telling of the Creation story by those who were there from the beginning, through the mega-Oasis years, and until the end. Particularly if you're into the bands featured, this doc is not to be missed. Even if you're not, if you're a music/music history fan, you should still check it out. Well done.
2 people found this helpful

eric karnesReviewed in the United States on November 1, 2017
5.0 out of 5 stars
Great bands, great music, interesting documentary. Give it a look.
Verified purchase
The bands featured in this doc represent all of the best music of that era coming from that place in the world, in my opinion. One of my all time favorite bands, My Bloody Valentine, was featured in this film, and not mentioned in it's description. That pleasant surprise in and of itself made seeing it worth while. I would recommend it to any music fan, familiar with these bands or not. If you aren't, you might just realize that you've been missing out.
One person found this helpful

AnonReviewed in the United States on May 25, 2019
5.0 out of 5 stars
Great documentary about Creation Records featuring Alan McGee, Ride, Jesus & Mary Chain, Oasis...
Verified purchase
This is a great documentary about Creation Records. If you're Gen X and you grew up with Creation Records as well as being part of the indie / alternative music subcultures of the '80s and '90s, you'll love this. If you have no idea who these people are, but are curious about real indie / alternative music, this is a good documentary to watch. (You can always internet search the names of all the bands and people you don't know.)
One person found this helpful

VINCE F64Reviewed in the United States on March 19, 2015
5.0 out of 5 stars
Oasis, The Jesus and Mary Chain and Ride were on this record label, the focus of Upside Down
Verified purchase
I actually found out about this documentary from Netflix. I had no idea that Creation Records was the label behind some of my fave British rock bands like The Jesus and Mary Chain, Oasis, Ride, The House of Love, etc. If you like those bands or are into 1980s/1990s British post punk music, you'll enjoy watching this historical rock documentary. If you like the film 24 Hour Party People about Factory Records (New Order, Joy Division, Charlatans), you'll enjoy Upside Down too.
2 people found this helpful

Jimmy DeLocheReviewed in the United States on June 2, 2012
4.0 out of 5 stars
Great Documentary of a Great Label.
Verified purchase
but I'm bummed there are no subtitles. I could use them as some of the folks on this have very heavy accents and it's hard to fully understand what they say.
I learned so many things about that entire music scene, especially about the bands. I highly recommend this to any Creation fan.
7 people found this helpful

JeffReviewed in the United States on November 7, 2017
5.0 out of 5 stars
If you love records, you'll dig this movie.
Verified purchase
I love all documentary films about record labels. This is a good one! Check it out.
One person found this helpful

D. WattsReviewed in the United States on March 14, 2015
5.0 out of 5 stars
Five Stars
Verified purchase
Great movie!
One person found this helpful
See all reviews
Back to top
Get to Know Us
Make Money with Us
Amazon Payment Products
Let Us Help You
EnglishChoose a language for shopping. United StatesChoose a country/region for shopping.
© 1996-2021, Amazon.com, Inc. or its affiliates