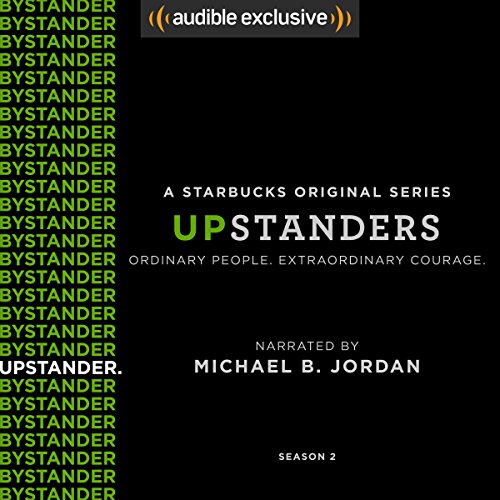 Performed by the acclaimed actor Michael B. Jordan (The Wire, Fantastic Four, Creed), Upstanders is a stirring tribute to the ordinary people who make a remarkable difference in big cities and small towns across the country.

For more than a year, Howard Schultz, the chairman and former CEO of Starbucks, and former Washington Post senior correspondent and associate editor Rajiv Chandrasekaran searched the country for even more of America's unsung heroes, as a follow-up to Upstanders' first season. Now you'll hear the stories and voices of the people they found - local citizens who are demonstrating unbelievable courage and inspiring a better America at a time when we need these heroes more than ever.

From the Dallas chef who's staffing his restaurant with former juvenile offenders, to the Missoula, Montana mother who opened her community's hearts and doors to refugees, to the Seattle firefighter who's helping to destigmatize post-traumatic stress among our nation's first responders - the 11 individuals featured in this second volume of Upstanders embody the American spirit and much of what's missing from today's national debate over how to salvage America's soul.

Through their passion for humanity, courage to lead, and willingness to act, the Upstanders we celebrate here remind us that we all have the power to create positive change in our communities and beyond.

Read more
©2017 Starbucks Coffee Company (P)2017 Audible, Inc.
Previous page
Next page
By completing your purchase, you agree to Audible’s Conditions Of Use
Sold and delivered by Audible, an Amazon company
Share

3.9 out of 5 stars
3.9 out of 5
29 global ratings
How are ratings calculated?
To calculate the overall star rating and percentage breakdown by star, we don’t use a simple average. Instead, our system considers things like how recent a review is and if the reviewer bought the item on Amazon. It also analyzes reviews to verify trustworthiness.
Top reviews

Writing Diva
5.0 out of 5 stars Awesome Audio Book
Reviewed in the United States on March 12, 2018
Verified Purchase
Great audio book! This was my first time using an audio book and I enjoyed it. Hearing about everyday people who are making a difference in the world was such a joy. Amazing narration done by Michael B. Jordan and I look forward to the next series. Audio was clear, easy to listen to and interesting!
Read more
One person found this helpful
Helpful
Report abuse

Valerie
5.0 out of 5 stars Wonderfully read by Michael B
Reviewed in the United States on March 7, 2018
Verified Purchase
Powerful stories of everyday people doing extraordinary things! Wonderfully read by Michael B. Jordan with the perfect inflection of voice and tone that struck a cord with my emotions and brought me to tears of both joy and heartache at the appropriate moment. Thank you Starbucks for sharing these beautiful stories with the world!
Read more
One person found this helpful
Helpful
Report abuse

Spencer O'Reilly
1.0 out of 5 stars Free for a reason
Reviewed in the United States on January 18, 2019
Verified Purchase
Thought I'd check it out. But the stories are poorly constructed, documented, and some of them aren't even good things to be hearing about.
Read more
2 people found this helpful
Helpful
Report abuse

Grandmama
1.0 out of 5 stars Not family friendly
Reviewed in the United States on August 15, 2018
Verified Purchase
I loved season 1. Season two had language I don’t want to hear as an adult and certainly wouldn’t want kids to hear.
Read more
3 people found this helpful
Helpful
Report abuse

Ella
2.0 out of 5 stars A ceo wrote this
Reviewed in the United States on January 4, 2020
Verified Purchase
I personally don't love books written by CEO's, I wasn't a fan of this. feels preachy and out of touch at the same time.
Read more
One person found this helpful
Helpful
Report abuse

Jami Weirich
5.0 out of 5 stars Five Stars
Reviewed in the United States on April 11, 2018
Verified Purchase
Great listen!
Read more
Helpful
Report abuse
See all reviews
Back to top
Get to Know Us
Make Money with Us
Amazon Payment Products
Let Us Help You
EnglishChoose a language for shopping. United StatesChoose a country/region for shopping.
© 1996-2022, Amazon.com, Inc. or its affiliates