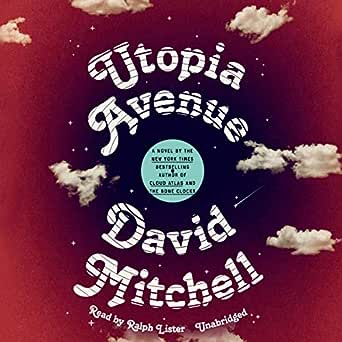 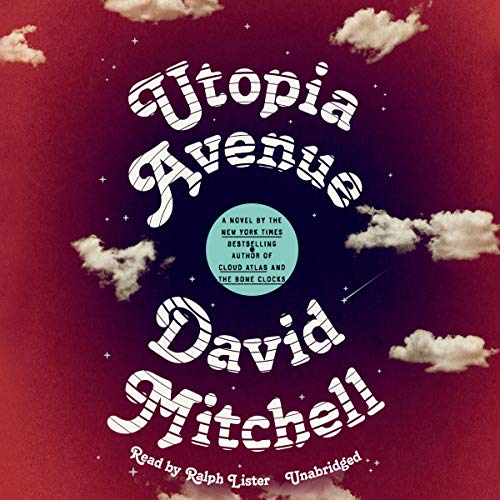 4.3 out of 5 stars
4.3 out of 5
119 customer ratings
How does Amazon calculate star ratings?
Amazon calculates a product’s star ratings based on a machine learned model instead of a raw data average. The model takes into account factors including the age of a rating, whether the ratings are from verified purchasers, and factors that establish reviewer trustworthiness.

switterbug/Betsey Van Horn
TOP 1000 REVIEWERVINE VOICE
2.0 out of 5 stars Bottom of the charts
Reviewed in the United States on July 21, 2020
Verified Purchase
What happened to David Mitchell since his Cloud Atlas masterpiece, his Thousand Autumns of Jacob de Zoet stunner, and even his satisfying Bone Clocks? This is an author who has bended genres and brought me to my knees. However, Utopia Avenue’s coverage of the counterculture 60s feels borrowed and Wiki’d. By far, it’s the worst slog by a notable, former first-rate author that I’ve ever read, a migraine-inducing mash of mixed metaphors and insensate, ham-handed prose, bad poetry, and corny lyrics. It is riddled with clichéd, gaseous sentences that telegraph and italicize every thought and action. Here’s a passage:

“Jellyfish of colored light breed and smear the dancers and Jasper’s mind is set adrift.” Then in italics, “Abracadabra, it’s a boy, why not name him Jasper?” (stop italics) “Why this name and not another?” (start italics again) “A friend? The stone? A long-lost lover?”
“Plenty more where we came from. A million per droplet of the stuff of life.”

I should have been warned when Mitchell decided that Utopia’s first album would be “Paradise is the Road to Paradise.” Is this supposed to be clever? Mocking? He takes this novel seriously, and the levity is at best, puerile. How about these lyrics to their first hit, Darkroom:

“We hid under trees from the rain and the dice; but under the trees the rain rains twice.”
These aren’t lyrics from counterculture music; it is the trivial stuff of a bubblegum chorus. (Exceptions are Richard Harris and Donna Summer, who can eloquently leave the cake out in the rain).

It opens in 1967, and the premise is the rise and fall of a British rock band. The novel is structured in six sections by the three Utopia LPs (A and B sides), and each song centers on a different band member: Romeo-ish, cheating Dean, the bassist; Lennon-ish Jasper, the watchful and schizoaffectve-ish guitarist; Elf, singer and keyboard player with man problems; and Griff, the brash and nervy drummer from Yorkshire. The characters, like the story, are trite and swirl in the self-referential Mitchellverse. Levon, the manager, is a meta-reference to Bone Clocks. Jasper de Zoet’s reference to Jacob is purposeful but insubstantial, like all of the meta- bombs. Perhaps Mitchell is reminding the reader that he once wrote novels with staying power.

The author hammers home that it is the 60s by all the name-dropping and cameo appearances: Jagger, Bowie, Sandy Denny, Zappa, Joni Mitchell, Hendrix, Jerry Garcia, Nina Simone, Pink Floyd, and the list goes on. Unfortunately, like the novel, their function is flimsy and clumsy, like Marc Bolan’s, “If you want to understand me, read The Lord of the Rings. It’s that simple.”

590+ pages of buzzwords, bromides, and banalities, swirling in Mitchell’s past novels. A solid narrative stands on its own, without weak wink-wink plugs to an author’s oeuvre. The Mitchellverse feebly tries to cover the shortcomings of this hubristic epic, but I wasn’t fooled by this impersonation of an Experience. Gimme Jimi any day instead.

I really dislike giving one star. So, in the spirit of 1.5, I’ll round it up to two stars.

Robert M. Joseph
2.0 out of 5 stars One of the most anticipated books of summer 2020- Read as most hyped books of Summer 2020
Reviewed in the United States on July 21, 2020
Verified Purchase
Firstly, this is not literary fiction- not in the slightest. This book makes Daisy Jones and the Six look like Tolstoy in comparison. Characters are stereotypes and poorly developed, the plot is a musical cliche, and finally the book uses real artists of the time which in this case is nothing more than a gimmick and adds little to nothing to the narrative. This is a clear case of publishing hype- the publishers have made a very weak book sell. Good for them- not so good for me and anyone else who paid for this.
Read more
8 people found this helpful
Helpful
Comment Report abuse

blueotter
5.0 out of 5 stars Join the Band
Reviewed in the United States on July 28, 2020
Verified Purchase
Man oh man, I LOVED this book. I surprised myself a bit, as I normally avoid rock band novels. My experience is they leave me with a bad taste, with the rock band re-creation feeling false and concocted. But I had no such concern going into Utopia Avenue. Why? I think it's because I've read so much David Mitchell and I trust him. (Cloud Atlas remains my favorite, although Bone Clocks snuggles up close; Ghostwritten is the one I've left to read).

The band Utopia Avenue reminded me a bit of Pink Floyd, and probably will draw other comparisons. Three of the four members are songwriters, and Mitchell writes surprisingly good song lyrics. The mixture, with cockney poor boy Dean Moss on bass, folky Elf Holloway on piano, mentally disordered but genius Jasper on lead guitar, and reliable Griff, great for on-target, funny one-liners, on drums, is not only believable, but is company I was happy to keep.

As you may have read, a number of characters are either from or connected to characters in earlier Mitchell books, e.g. guitarist Jasper de Zoet (pronounced "Zoot") is a descendant of Jacob de Zoet from The Thousand Autumns. Many real life music stars make appearances: a lovely and funny Leonard Cohen, Mama Cass, Janis Joplin, David Bowie and on and on. The time period for much of the book is the late '60s, and Mitchell portrays the music scene as akin to Paris in the 1920s for writers like Hemingway, Gertrude Stein and the Fitzgeralds, or Montmartre for Picasso, Matisse and other artists (and Stein!) a couple of decades before. They all knew each other, they all debated and discussed technique and content, and they all inspired each other. They all also had love, life, sex, mortality and purpose on their minds just like regular folks.

There is something about Mitchell's writing that goes down so easily, with an appealing flavor. This novel about the band's rise from obscurity to some success, and perhaps a lasting legacy, was fairly conventional until . . . it wasn't. A bit like The Thousand Autumns. It's a great read, and it makes me happy to have been part of it as the reader.

There's a lot of quotable wisdom in Utopia Avenue. This one is from Mitchell's Frank Zappa, after a discussion of the Garden of Eden that I really enjoyed.

"I'm saying", replies Frank, "that if you ever think, I've found Paradise, you are not in possession of the facts. Don't be dazzled by peacocks either. They're vain, ornery sons-of-bitches who shit like it's going out of style."

Here's an epiphany from Elf about labels and freedom:

"“Labels. I stuck them on everything. 'Good.' 'Bad.' 'Right.' 'Wrong.' 'Square.' 'Hip.' 'Queer.' 'Normal.' 'Friend.' 'Enemy.' 'Success.' 'Failure.' They're easy to use. They save you the bother of thinking. Those labels stay stuck. They proliferate. They become a habit. Soon, they're covering everything, and everybody, up. You start thinking reality is the labels. Simple labels, written in permanent marker. The trouble is, reality's the opposite. Reality is nuanced, paradoxical, shifting. It's difficult. It's many things at once. That's why we're so crummy at it. People harp on about freedom. All the time. It's everywhere. There are riots and wars about what freedom is and who it's for. But the Queen of Freedoms is this: to be free of labels.”
Read more
5 people found this helpful
Helpful
Comment Report abuse

Laramie Know It All
2.0 out of 5 stars Probably Mitchell's Weakest Work
Reviewed in the United States on August 2, 2020
Verified Purchase
I've enjoyed to varying extents pretty much all of Mitchell's previous work. His writing is highly skilled and can even be quite breathtaking at times, his plot lines are highly imaginative, and his insights into human nature can be astute and even touching. And it's not that Utopia doesn't have its enjoyable moments. But if this was an album review, you'd have to say that the songwriting was consistently weak, even if the musicianship has a few high points. Some parts were very predictable and formulaic whereas other parts will be confusing to many readers. And like most of Mitchell's previous novels, it's very self referential, which seemed particularly forced in this context. The 60s vibe was a bit much as was the endless name dropping. And if that isn't enough the ending was crap. If haven't read Mitchell's previous work, know that Cloud atlas, Bone clocks, The thousand autumns of Jacob de Zoet, Black swan green, and others, provide really enjoyable escapes. If you're a Mitchell fan and insist on reading everything he's written, you've been warned. At the least, wait to get it from your local library.
Read more
5 people found this helpful
Helpful
Comment Report abuse
See all reviews from the United States