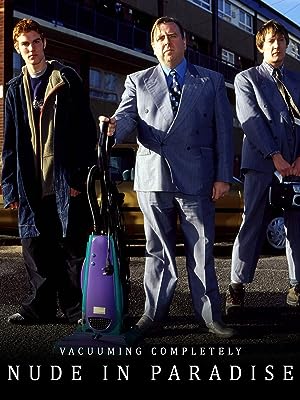 (15)
6.41 h 15 min200118+
Tommy is a vacuum cleaner salesman gripped by the fever of closing the deal. He lives on 'puffa puffa rice' stored in his glove compartment and listens to motivation tapes of his own voice shouting 'sell, sell, sell'. He's sure the Golden Vac (the holy grail of vacuum salesmanship) can be his - if only he hadn't been saddled with Pete, his meek sales trainee.

Robert I. HedgesReviewed in the United States on May 28, 2015
3.0 out of 5 stars
"Sign Here...I'm Not Going Till You Do!"
Verified purchase
Director Danny Boyle has a talented eye for unusual situations and dark comedy, and does a very good job here with one of the most peculiar commentaries about depressed western economies that I can remember. "Vacuuming Completely Nude in Paradise" has one of the greatest titles in film history, and has great performances from Michael Begley as Pete, a disillusioned young vacuum cleaner salesman apprenticing under the insane elder statesman of aspiradora sales, Tommy Rag, played by the brilliant Timothy Spall.

The film is filled with over-the-top moments like vacuum cleaner point of view shots and a brilliantly choreographed synchronized vacuum cleaner dancing routine to the tune of "My Baby Takes The Morning Train" by Sheena Easton at the Golden Vac Awards. Perhaps no scene is more visually searing (and funny) than the sight of Timothy Spall undressed in a flamenco seduction complete with castanets. (Oh the humanity!) I loved the contrast between Tommy and Pete, and the backstory that shows Tommy's downfall and Pete's increasing moral sensibility as the movie goes on. The pivotal scene at the Golden Vac Awards which results in no end of emoting from Tommy, ultimately culminating with flinging a vacuum into the Atlantic Ocean in a scene of great pathos is brilliantly staged.

The film runs about 75 minutes and even though it has lots of razor-sharp edits, it still seemed a bit overlong for the premise. The actors do a great job here, with Spall and Begley forming an absolutely perfect opposing duo highlighting the seedy side of vacuum cleaner sales; Spall is a great actor and truly convinces you of his single-sighted malevolence in this role, while Begley's journey of conscience is utterly brilliant.

KGReviewed in the United States on August 27, 2013
4.0 out of 5 stars
Danny Boyle's work is always worth watching
Verified purchase
"Death of a Salesman" meets "Glengarry Glenn Ross" on acid, this portrait of the empty, horrible life of
door-to-door selling was made on the cheap in 20 days for the BBC. It has Boyle's characteristic energy,
and playful eye and a great, if occasionally over-the-top performance by Timothy Spall as a salesman
brilliant at his craft if without a shred or morality or self-worth left,. There's also a solid performance
by Michael Begley as the young `rookie' assigned to apprentice with Spall.

All that good stuff said, I just wish this was deeper. It's dark, certainly, but there's a certain familiarity and
even glibness to it's manic attack on capitalism. Enjoyable, fun, sad, but it feels like inside this good movie
was a great one looking to get out.
One person found this helpful

Art SnobReviewed in the United States on June 9, 2004
5.0 out of 5 stars
Astonishingly hysterical performance by Timothy Spall!
Verified purchase
I'll always have fond memories of this movie. I first saw it at the 2001 Toronto Film Festival, just 3 days after 9/11. You won't find a much tougher crowd for a comedic movie to premiere to than the one assembled for this particular screening, but such is the power of this film's dark humor that it was able to evoke convulsive laughter even from an audience this somber.
Danny Boyle, who soared with the British films SHALLOW GRAVE and TRAINSPOTTING, then fell on his face with the Hollywood duds A LIFE LESS ORDINARY and THE BEACH, got back in form with this effort, reborn of the freedom that digital technology affords today's daring (and invariably under-financed) filmmakers. He's obviously fascinated with the limitless possibilities for camera placement that the technology affords, embedding miniature cameras all over the sets to permit individual scenes to be viewed from a rapid-fire succession of perspectives. His editing and music skills, combined with stellar camerawork by noted dogme cameraman Anthony Dodd Mantle, results in a raw, exciting new `dogme-MTV' type of look ... a look that Boyle put to good use in his subsequent hit, 28 DAYS LATER.
But `look' alone cannot make a movie. You still need a script to work with, and Boyle is blessed here with an outstanding one from Jim Cartwright. The story is nothing less than a bold and brilliant comedic re-conceptualization of Arthur Miller's DEATH OF A SALESMAN for the digital age. And unlike Miller, Cartwright doesn't play coy with what the salesman is actually peddling -- you know right from the start that it's vacuum cleaners.
The `surrogate' character in this film is a likeable young slacker named Pete (Michael Begley) who loves dance music and has some mixing talent, but hasn't been able to carve out any kind of career in the music biz. His girlfriend has to perform strip-o-grams in order for them to make ends meet, and they both want out of this situation in the worst way. The girlfriend's plight gets especially humiliating one night when she performs at a retirement party for a vacuum cleaner salesman, and on a suggestion, Pete decides to pursue a career in this profession as a way out for both of them.
Enter the most blazing, mesmerizing, maniacal lead performance by an actor in many a moon. Pete is made an apprentice to star salesman Tommy Rag, played with incredible over-the-top intensity by veteran Timothy Spall. If there was an ABSOLUTE `best actor' award for the BEST performance, period, in a given year, Spall would have been my hands-down choice for 2001. He makes EVERY ruthless salesman in movie history (Kurt Russell in USED CARS, the gang from THE BOILER ROOM, etc.) look strictly `soft sell' by comparison. This is truly a performance for the ages ... ONE THAT NOBODY WITH A SALES JOB SHOULD MISS!
You may think that you've seen the `rookie paired with vet' thing done to death in the movies, both in dramatic and comedic contexts, but I can assure you that you've never seen anything even close to the `eye or the hurricane' variant that Boyle has come up with here. What he's managed to pack into little more than an hour's running time is astounding ... a fully realized comic tragedy of Shakespearean proportions that manages to be relentlessly and mercilessly funny.
23 people found this helpful

BH in Sacramento, CAReviewed in the United States on January 30, 2013
2.0 out of 5 stars
"Bait & switch"?
Verified purchase
We saw previews of this on a DVD for another movie. It looked like it was going to be hilariously amusing. As is sometimes the case with previews/trailers for movies, it was one of those where the PREVIEWS pretty-much show you ALL THE BEST PARTS and the REST of it is "FILLER". The acting was good, but the plot----if there was one----was obscure, uninteresting, & sort of "all-over-the-place". We have really liked some of director Danny Boyle's flicks, like "Millions" for example, but this wasn't one of them. We were sorry we wasted our time & money. I would not recommend it.

akrobertReviewed in the United States on November 7, 2021
1.0 out of 5 stars
Bad
Verified purchase
Really bad. Regretted even taking time to fast forward through this.

JOHN DUROSEReviewed in the United States on November 2, 2010
5.0 out of 5 stars
Timothy Spall is amazing
Verified purchase
Anybody in sales or those with pulse should watch this film just for Timothy Spall's over the top character. One of the most memorable performances in film. After renting it too many times, have now bought my own copy. You just can't beat the Brits when it comes to comedy

Duco de KloniaReviewed in the United States on February 17, 2014
5.0 out of 5 stars
Crazy movie
Verified purchase
I had seen it before, and loved it.
Your first day at a new job and having to work with the salesman from hell...

Elise P. A. HaasReviewed in the United States on February 23, 2006
5.0 out of 5 stars
Great Brit Film
Verified purchase
This is a great off the wall film. Good BBC production. Highly recommend.
See all reviews
Back to top
Get to Know Us
Make Money with Us
Amazon Payment Products
Let Us Help You
EnglishChoose a language for shopping. United StatesChoose a country/region for shopping.
© 1996-2022, Amazon.com, Inc. or its affiliates