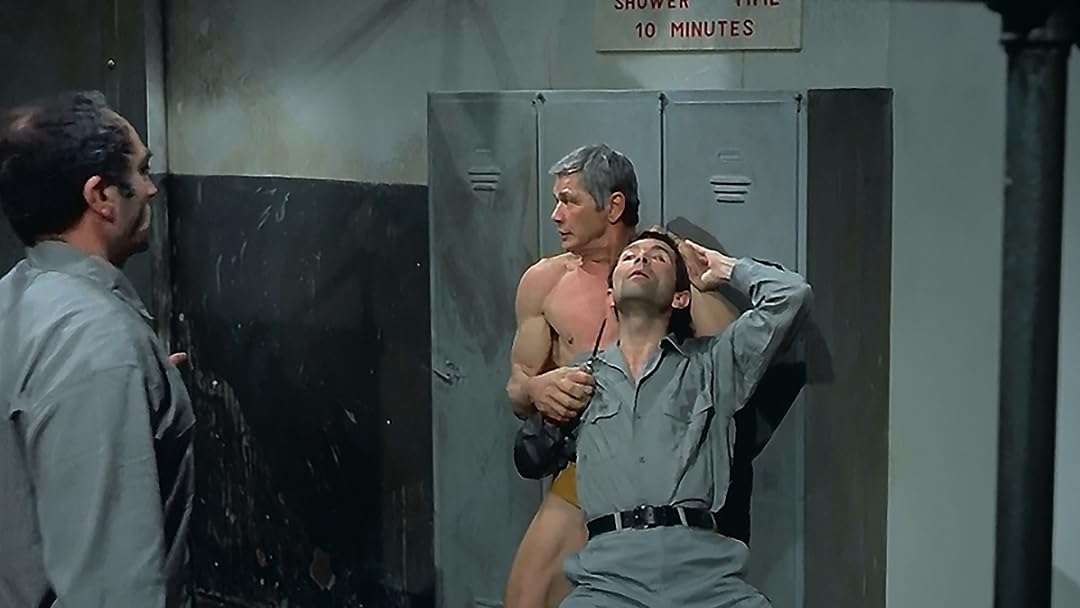 (172)
6.42 h 5 min1972PG
Gangster Joe Valachi is a marked man in the same joint where mob boss Don Vito Genovese is imprisoned and he's forced to co-operate with the DA in exchange for protection.

joel wingReviewed in the United States on October 16, 2021
4.0 out of 5 stars
The first man to publicly expose the mafia
Verified purchase
The Valachi Papers is a very interesting mafia film based upon a true story of Joseph Valachi who was the first to publicly testify to the government that the mafia existed. Valachi is played by Charles Bronson.

The movie plays out like a biography of Valachi as he flashes back and forth between the present where he’s snitching to the past when he first got involved with the mafia. He was in early and right at the top so his story includes some of the most famous mobsters like Lucky Luciano, Vito Genovese and Salvatore Maranzano who was the boss of bosses and formed the Five Families in New York City. That’s what’s most interesting about the film.

It tries to be realistic and shows how the mafia started off talking about family but was always ruthless and full of people willing to turn on others to rise higher in the ranks. It’s the polar opposite of many in the genre like the Godfather series.

Kindle CustomerReviewed in the United States on July 2, 2022
3.0 out of 5 stars
Overshadowed by The Godfather, but it shouldn't be.
Verified purchase
If you're a fan of Mafia movies, this is a must see. Bronson does a good job with the role, portraying Joe Valachi as he goes from small time hood to big time mobster, to incarcerated con.

J. M. GrimReviewed in the United States on November 10, 2021
4.0 out of 5 stars
Overlooked genre movie.
Verified purchase
I enjoyed it. It's probably not 'Oscar material' but it's still a good movie. Give it a go.

Br. MatthewReviewed in the United States on November 7, 2021
2.0 out of 5 stars
Poor production was profoundly distracting
Verified purchase
There were too many errors that jarred one out of a willing suspension of disbelief. One minute you are watching a car chase in the 1920s, then you notice the Twin Towers (built late 60s)... with the odd 1960's-70's cars mistakenly included in numerous shots. So it went for the entire production. In some ways, perhaps this could be a drinking game... spot the gross time-period errors.
Bronson, to his credit, did an excellent job. The other actors were mostly ethnic caricatures.

Mario Diaz NemaReviewed in the United States on February 17, 2006
5.0 out of 5 stars
Again in circulation
Verified purchase
This item was banned of circulation for many years in VHS format. It was a very hard to get. Fortunately due to the marvels of DVD it is again on circulation. As a movie collector I am I am very glad of seing again Charles Bronson acting with his wife, beautiful Jill Ireland, that at the time of the movie production (1972) has been suffering a severe illness that finally cut short her life a few years later. If you like Mafia, mobsters movies, this is a good item for you to buy. It tells chronologically a resumee of the life of JOSEPH VALACHI, the guy who opened the secrets of the COSA NOSTRA to the public on the 60's decade. Supposedly it is based on the BOOK THE VALACHI PAPERS by PETER MAAS, but -for good- there are some differences from the book in the movie that makes it more interesting due to the interpretation of DIRECTOR ROGER CORMAN (Also, Director of St. Valentine's Day Massacre, 1967, and many others)
10 people found this helpful

L. HellerReviewed in the United States on January 19, 2011
5.0 out of 5 stars
Glad this Hard to Get Title is in DVD
Verified purchase
I remember watching this in my 20;s and loving it for its authentic acting and grittiness. For many years this was a hard to obtain title,but thankfully its out on DVD. Before Stallone, Arnold, and Bruce Willis, there was Charles Bronson and he gives his usual understated but tough performance as the mafia;s first soldier to break the code of Omerta. Loosely based on Peter Maas bestseller, The Valachi Papers, the movie depicts how Joe Valachi became made,(inducted into the Mafia)[Valachi was the first Mafiaso to describe the swearing in ritual] his rise as a soldier within the Genovese Crime Family, and the actions that compelled him to betray the crime family of which he was a loyal member. For anyone who likes a good Mob-related movie, this one is for you.
9 people found this helpful

Dave P.Reviewed in the United States on December 30, 2005
5.0 out of 5 stars
MovieHistorian
Verified purchase
This is one of the best movies on organized crime available. It is along the lines of "Goodfellas" and "Donnie Brasco" although it takes place at a much earlier time in history. It is gritty and factual although artistic license is expected. The movie focuses on Joe Valachi who was the first of the Mafia informants and set the stage for others to follow. The movie gives explicit and factual information on the history of the American Mafia from the original "bosses" through the making of the syndicate on through the Vito Genovese regime. It is a must see for anyone interested in the history of organized crime from its very beginning on to the beginning of their decline.
28 people found this helpful

Jerome E. OwensReviewed in the United States on May 12, 2007
4.0 out of 5 stars
Charles Bronson telling a True Story
Verified purchase
This is an excellent movie I saw when it came out and again 35 years later.It's amazeing how close to the facts they made this flick.In my memory the special effects were better,lol,but the story is good.the special effects are on a par with the Gunsmoke series.I give it a A+ for story content and a B for the Acting,and another B for the effects,because they were state of the art. Good movie if you want to see a REAL-LIFE MAFIA STORY.
6 people found this helpful
See all reviews
Back to top
Get to Know Us
Make Money with Us
Amazon Payment Products
Let Us Help You
EnglishChoose a language for shopping. United StatesChoose a country/region for shopping.
© 1996-2022, Amazon.com, Inc. or its affiliates