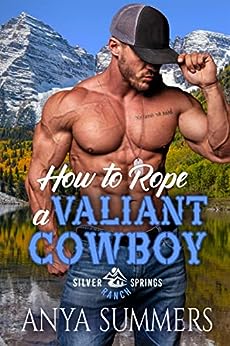 by Anya Summers (Author) Format: Kindle Edition
Book 5 of 6: Silver Springs Ranch
See all formats and editions
Sorry, there was a problem loading this page. Try again.
Retired Navy Seal Duncan has a stellar set up. After years of covert operations dodging bullets, he’s living the high life, teaching tourists basic outdoor survival skills at Silver Springs Ranch. The only thing he is evading these days are the countless women trying to trap him into a relationship. He enjoys women and their company immensely, but the institute of marriage and committed relationships are not for him.

And yet the newest maid, Eve, leaves him stymied. She’s heart-stoppingly gorgeous, one of the worst maids he has ever encountered, and is holding on to dark secrets—ones that engage his every need to protect and shield her from whatever darkness eats at her.

She’s a total thorn in his side, turning him inside out and tying him up in knots with unquenchable desire. Due to the severity of his fascination, he cuts a wide berth around her, figuring it’s best to stay as far away from her as possible…

Until she comes to him one night and begs him to teach her self-defense. Duncan discovers he can’t contain his need any longer, not when she is looking to him for guidance—and like his every fantasy come to life. He yearns to have her on her knees, begging for his dominance.

And when she becomes a target, he will do whatever it takes to save her.

Audible Holiday Deal
Join Audible Premium Plus for 60% off. Only $5.95 a month for the first 3 months. Get this deal
Books In This Series (6 Books)
Complete Series
Silver Springs Ranch
Kindle Edition
Page 1 of 1Start OverPage 1 of 1
Previous page
Next page

4.6 out of 5 stars
4.6 out of 5
7 global ratings
How are ratings calculated?
To calculate the overall star rating and percentage breakdown by star, we don’t use a simple average. Instead, our system considers things like how recent a review is and if the reviewer bought the item on Amazon. It also analyzes reviews to verify trustworthiness.
Top reviews

Redrabbitt
5.0 out of 5 stars WITH HIM, SHE WAS HOME
Reviewed in the United States on November 23, 2021
While this is a series, the fifth book is well-written and will read as a stand-alone. The story mainly focuses on two people, former Navy SEAL Duncan Bowers and Eve Carruthers. The story is full of secrets, mystery, suspense, danger, and two people needing each other.

Kate Jefferson's life was turned upside when the man she was with, Silas, and his brother, Trevor, robbed their family-founded bank. Kate was a witness to the crime and responsible for the guilty verdict of the Cleveland brothers. The story begins with Kate entering the home that has been in her family for several generations and being confronted by Trevor. When he attacks her, she fights back and escapes, but not before she injures him. The police are no help, and a restraining order is a useless piece of paper, so Kate starts changing her name and goes on the run. Eve Carruthers is created and her new alias. She will see an ad in the newspaper for a maid at Silver Springs Ranch and applies and is hired.

Duncan Bowers was hired at Silver Springs Ranch and takes individuals, families, and groups on survival hikes. He met the new maid, actually scared her when she didn't realize he was there. What a shock when Duncan returns from a camping trip to learn he has a two-day survival hike and camping by request—and then discovers it is Eve who hired him, wanting to learn survival skills.

The story's plot is full of secrets, ones that Eve hates telling, knowing that it is all a lie. Duncan realizes that Eve is hiding things, but he teaches her what she wants to learn for self-defense and wilderness survival skills. Previously he found Eve at Cabin X and got upset that she was there. Eve had needed to use the restroom and, by chance, discovered the BDSM cabin that has her curious. The chemistry between these two is thick, yet something they have skirted around. She will kiss Duncan, and he warns her not to do that again unless she wants to take things further. When she kisses him on their camping outing, he warns her again, and she kisses him again, wanting more. This will set the tale into motion with these two.

Duncan: I told you not to kiss me unless you planned to see It through. I won't do this yo-yo BS where you put the brakes on.
Eve: What are you going to do, spank me?
Duncan: I should. Go. To. Bed.
Eve: I will. But not alone.
Duncan: Be sure. I kiss you again; I doubt I will be able to stop.
Eve: I want you, Duncan. Be with me.

"For the first time since leaving her home and name behind, she wanted to confide in him, hand him all her problems, and lean."

The story has the good, the bad, and the evil of people. Eve becomes friends with several of the other ladies at the ranch. She and Duncan start sharing meals and each other's beds when he isn't out with campers. Eve still worries that Trevor is after her, he isn't going to give up, and when he finds her, he will kill her. Eve finally realizes she has to share her story, she starts with Amber and her friends, who all offer her support, but she doesn't share her real name. When she realizes that the girls are supportive, she shares the truth with Duncan, who vows he will protect her—not only him but all the men on the ranch.

Now that her secret is out, she feels better because she opened up to Duncan—their relationship is stronger and getting serious, something neither of them ever expected to happen. Will their happiness be destroyed when Trevor catches up with her? Will it send Eve on the run again? The story had me on an emotional roller-coaster ride towards the end, and I was crying.

“A life loving Duncan was more than she had ever thought possible. And she didn’t want to miss a thing.”
Read more
2 people found this helpful
Helpful
Report abuse

Sue B
5.0 out of 5 stars I simply loved this read, so cleverly written with great characters
Reviewed in the United States on November 23, 2021
Duncan is retired and has been used to working in difficult situations in covert operations so when he is asked to help teach the one female he has been steering as far away from as possible some self-defence moves his alarm bells begin to sound a definite warning.

Eve is quiet and keeps herself much to herself unlike many of the females that seem to think he is a prime piece of beef to be sampled and chased. He believes that there is far more to her than meets the eye and it soon becomes apparent this is very much the case.

As well as teaching her some self-defence moves and also teaching her self-awareness, accessing possible dangers and ensuring that those around her pose no threat he has something that he would absolutely love to do, he also believes that she would enjoy it as well. He would like to put her over his knee and show her the pleasure and security that can be had with a funishment spanking, also the assuredness she could gain knowing there was someone on her side looking out for her and ensuring that she was safe and cared for.

All he has to do now is convince her of his feelings so that she can begin to trust, something he does not think will be easy.

And when she becomes a target, he will do whatever it takes to s

I assure you that you will love every moment of this book it is simply a fantastic read.
I voluntarily received and review an Advanced Reader Copy
I thoroughly enjoyed the book and look forward to reading any future publications; keep up all the great writing.
Read more
One person found this helpful
Helpful
Report abuse

Jill G.
5.0 out of 5 stars A great story and seriew
Reviewed in the United States on November 23, 2021
The Silver Springs Ranch books have all been great reads and this is a wonderful addition to the series. I loved Duncan and how he wanted to protect Eve, even though he knew she was keeping secrets. A lot of stories have some degree of danger which adds to the suspense and this is no exception. This is a great love story that is well written and very entertaining. I would definitely recommend this book as a great read along with the other books in this series.
I received a free copy of this book via Booksprout and are voluntarily leaving a review.
Read more
One person found this helpful
Helpful
Report abuse

Lili
5.0 out of 5 stars Eve and Duncan are good for each other!
Reviewed in the United States on November 23, 2021
Eve is looking for a fresh start. Duncan brings out the best in her. They fall in love, even though someone from her past resurfaces. I adore German Shepard's, and Sampson is endearing!

Aunt G
TOP 1000 REVIEWERVINE VOICE
4.0 out of 5 stars Slow burning romance, heat & danger
Reviewed in the United States on November 26, 2021
I enjoyed this book. I liked Duncan and Eve and my heart ached for her. The story kept me entertained as the slow burning romance simmered along. I am electing to post a candid review.
Read more
Helpful
Report abuse
See all reviews