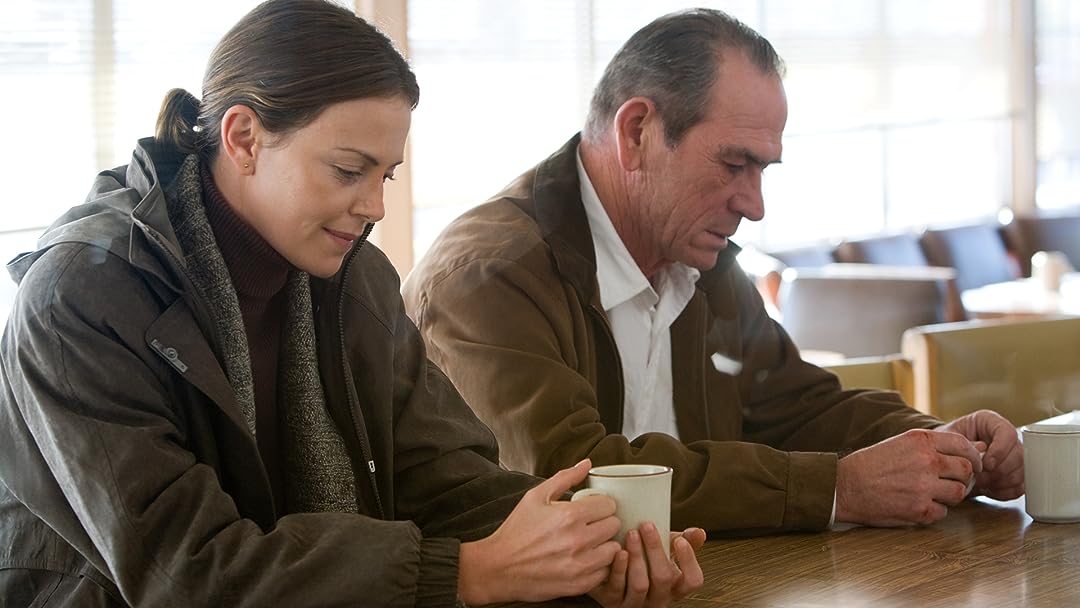 In the Valley of Elah

(914)
7.22 h 1 min2007R
Desperate to solve the mystery behind their son's disappearance, his father, also a war Veteran, and mother seek the help of seasoned police detective to uncover his true fate.

Wallace CasonReviewed in the United States on December 25, 2021
5.0 out of 5 stars
New Insight into PTSD
Verified purchase
Gives new insight into how the troops come home still wired to kill. The acting is superb, especially Tommy Lee Jones and Charlize Theron. The story is definitely 5 star worthy. I guess you could call it a tragedy for real. An eye-opener for sure.

One caveat or perhaps a plus: the disc is two-sided, one side in regular DVD and the other side in HD DVD, a totally new format that my recently purchased DVD player couldn't handle. The disc came in a red case, same size as a regular Blu-Ray case but red. If you have an HD DVD player you can see it in HD DVD; otherwise you just watch it in DVD, which I suppose is perhaps still Blu-Ray, or perhaps just regular DVD. It played fine, not to worry.

Grey BuyerReviewed in the United States on August 18, 2013
5.0 out of 5 stars
Entertaining movie with outstanding acting
Verified purchase
Many people try and watch "a movie based on actual events" like it portrays facts and the truth. Nope, it's a movie, not a documentary. I compare all "movies" to novels, and those doing the writing can take all the artistic license they want with the facts and storyboard. Documentaries I compare to non-fiction, and the writers better get the facts straight, making clear distinctions between truth and conjecture. "In the Valley of Elah" is a movie, not a documentary.

The "actual events" upon which the movie is based are atrocious and heartbreaking. The same characterization occurs in the movie. The full facts of the actual murder were never revealed by the court. The movie wraps things up a little too quickly. Although there is quite a bit of artistic license in the movie, it wove many of the actual facts into the plot. That said, the characters were strong, the plot patiently revealed, and the message clear about how the inhumanity of war can change people.

Tommy Lee Jones and Susan Sarandon were the perfect decades married couple. Tommy Lee's character and his calculating patience was powerful. Charlize Theron, with bare makeup, was outstanding as the woman trying to make her mark in a man's world.

As a veteran, what I found refreshing was the underlying theme of the movie; the contrasting expectations of soldiers brutally adapting on the battlefield with their peaceful adaptation back into safety and security after a brief 24 hour flight home. As anyone can tell you who has faced the continuous and indifferent threat of death, that transition takes time.

EBReviewed in the United States on December 3, 2020
5.0 out of 5 stars
Excellent.
Verified purchase
An excellent mystery, who-done-it, police procedural about an Iraqui vet who goes missing after returning home. His father, a Viet Nam vet, goes searching for him. The ending was chilling. The father undergoes a change. Very well done. Tommy Lee Jones was outstanding but then so was everyone else. An excellent film.
2 people found this helpful

S. KarlReviewed in the United States on September 14, 2012
5.0 out of 5 stars
Wow
Verified purchase
I'll admit I was a little leary about this movie. I had never heard of it. But it starred Tommy Lee Jones; who, in my humble opinion, is one of the finest actors in America. The film has so many layers. I've seen reviews that stated that Tommy Lee's performance was wooden and lacked emotion. To me, he was more like a man that was keeping his emotions barely at bay. He wanted to understand why his son was brutally murdered and mutilated. Sure, he could have been screaming and yelling at everyone, but never gets anyone anywhere. Most people that have served in the military knows that.

Mr. Jones is surrounded by a great cast. Charlize Theron as a cop that people think can't handle anything besides domestic disputes and lost dogs, Susan Sarandon as the mother who has lost one son already and has just lost her second son. Even Jason Patrick turns in a great performance as a representative of the JAG. All turned in above the bar performances.

The plot is based on an actual event. This brings a sense of realism to the movie. I mean, let's face, it's hard to find a character driven mystery anymore. It seems that all Hollywood wants to do it spit out movies that compete with each other as to who can create the largest explosion or highest body count. Don't get me wrong, I enjoy these as much as the next guy. But when a film like this comes along, it should be pushed and advertised with the same zeal.

This movie definitely goes on my list of the Best Movies You've Never Heard Of.
14 people found this helpful

David MastersReviewed in the United States on May 13, 2010
4.0 out of 5 stars
Solid material, well done, but not much memorable
Verified purchase
It's a good movie - I'd give it a 7 or 8 out of 10. It moves slow, but it does move. There's no really spectacular, stand out moment to the movie, nothing instantly memorable. And while it's about people returning from the battlefield, what they've seen and done, how they can't adjust to 'civilian' life, it doesn't really touch on any of that except briefly; it dances around the subject. There's no lecturing on any one subject, which is good, but on the other hand it doesn't seem to pay any attention to any one subject. But then, the movie does focus on the people involved, and in that it does a good job.

Tommy Lee Jones is one of those that for me are hit or miss - I like him in some things (such as "[[ASIN:B00005ATZT The Fugitive]]" or "[[ASIN:B00177YA1K M.I.B.]]"), don't like him in others. He does a good job here - the role fits him. Charlize Theron... she's usually very good, and she is in this as well. She can be a chameleon, fitting into the part, but it doesn't quite feel like she fit into this - she tries damn hard, but it just misses by a hair. Plus she's just too damn good looking for the role. Susan Sarandon barely has much of a part in this, but she fits right into it - very good, very well done. Reviews, etc have mentioned Josh Brolin - probably because he's a 'name', because he has less than five minutes of screen time in this. Basic stuff, and I guess he does it well enough.

It's something that I'm glad I've seen, and that I'll probably watch again at some point. It's worth what I paid for it, and that's all that can really be said.
2 people found this helpful

James H. WilsonReviewed in the United States on June 18, 2011
5.0 out of 5 stars
Tough Movie. Tough of the heart.
Verified purchase
Damn!
If I were a young actor and saw Tommy Lee Jones in this movie I'd quit and go work in a burger joint. I would know that I could never turn in a performance like his.
This is a tough movie that is a story of a hunt, a vile set of crimes and two forces set against each other across a valley of mistrust and secrecy. You will never see acting any better than in this film. It is hard to say that you would "enjoy" this movie like it would be hard to "enjoy" Saving Private Ryan. But at the end you know that you have seen the best in the acting business run themselves through the wringer and have taken you along for the ride.
This is a great movie with great actors turning out fantastic performances. I suggest that you get a regular DVD as there is no scenery or fantastic landscapes that would make you wish you had it on blu-ray. It is all acting at its best.
It does beg a question. What is happening to our soldiers in Iraq and the Middle East? What are their lives to be like when they come home?
8 people found this helpful

JReviewed in the United States on July 30, 2018
3.0 out of 5 stars
Good Story, But Incredibly Slow
Verified purchase
As expected with a Tommy Lee Jones movie, it was well acted. A fairly good story as well. But it really dragged in a lot of places. A lot of lingering shots and slow moving plots. A lot of useless footage. I felt like the movie could have been condensed to an hour and had the exact same effect. From someone that enjoys slow paced movies, I still found this to be at a crawl.
3 people found this helpful

Captain GrouperReviewed in the United States on January 6, 2021
3.0 out of 5 stars
A good movie that falls short a bit
Verified purchase
This movie fell a little short because of the script.. the acting was top notch though and that brought this movie through. The movie has good premise, to me it just wasn't presented well. Be you're own judge of it though. It's not a bad flick, just to me it fell a little short of what it could have been
See all reviews
Back to top
Get to Know Us
Make Money with Us
Amazon Payment Products
Let Us Help You
EnglishChoose a language for shopping. United StatesChoose a country/region for shopping.
© 1996-2022, Amazon.com, Inc. or its affiliates