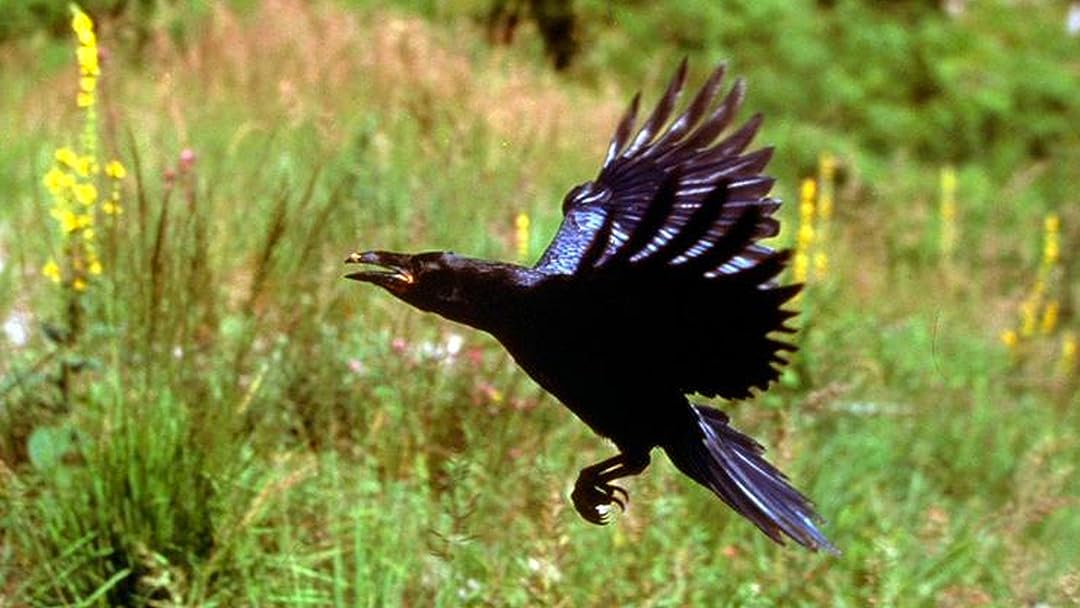 The Valley of the Ravens

(32)
50min1997ALL
At the edge of the Dead Mountains lies an enchanting, sparsely populated area - the inner Alm Valley. Especially in winter up to 120 half-grown ravens gather in the area around the wild animal park to steal food. This is the biggest permanent settlement of ravens in all of central Europe.

TrancelucenceReviewed in the United States on October 17, 2015
4.0 out of 5 stars
Good introduction to the marvelous raven
Verified purchase
Good intro to some natural raven behavior along with glimpses of very simple experiments with them, plus the Austrian scenery is beautiful. I thought it worth watching as an introduction to ravens but it doesn't begin to capture their personalities or intelligence. I've lived with crows, rehabilitated them for return to the wild, and also observed both crows and ravens in the wild and both species are AWARE, think, consider, have an incredible presence, individual personalities, etc. I had a large crow for some 10 years (not captive, my best pal) whom I taught to speak (meaningfully), and I wish I could tell you the ingenious ways he devised to communicate when he couldn't express himself in words. He'd point at things, for one thing. Smarter than chimpanzees (with whom I'd previously worked, doing sign language research). He was very affectionate, I'd raised him from a chick (happened to be there when an owl knocked him out of his nest).

The production has great respect for ravens, and I heartily agree that they (along with crows) are the most wonderful of creatures, some so wise/prescient it borders on the mystical, as expressed in the film. But it barely scratches the surface. I don't know about ravens, but crows are very devoted to kin and typically stay with their parents and help raise siblings for years, 5-7 as I remember, before they mate and rear their own young (and often remain with their parents and siblings for life, in an extended family group). I haven't read more about it yet but I'm betting the young ravens in the film were most likely visiting and then returning to their families. The film didn't go into much detail about their social organization and seemed to suggest they were permanent residents of the valley.

This is an odd documentary, in that perhaps it tries to cover too many bases, e.g. showing something of the lifestyles of the local residents and lots of details about the climate. I would've liked more info on ravens in general and the research being done on them. But the film is worth watching for the shots of ravens performing acrobatics simply for the sheer joy of flying alone- especially when done in tandem, almost touching, with mates. These shots perhaps best capture their spirit- astonishing. The only other bird I've personally seen do this (besides crows) are society finches. Recommended!

gubuduReviewed in the United States on May 25, 2019
5.0 out of 5 stars
The Aim valley is magical and here is a rare chance to experience it.
Verified purchase
I liked everything about this show! The music,the narration,the exquisite photography were all poetic and informative.Albeit the stars of the show were the Ravens.
4 people found this helpful

Kindle CustomerReviewed in the United States on April 26, 2020
5.0 out of 5 stars
I thought I knew ravens
Verified purchase
This documentary has soothing music, humor, fantastic shots of ravens in nature, and loads of information. It's suitable for children, even though ravens are meat-eaters; they eat carrion, so there are no scenes of one animal killing another. I've been watching crows in my neighborhood and kind of thought ravens were pretty much larger crows. Now I know better.
One person found this helpful

LohengrinReviewed in the United States on January 19, 2020
4.0 out of 5 stars
Great to look at!
Verified purchase
Focuses mostly on the interactions between ravens with other species and humans in a game park in Austria. Limited discussion regarding Ravens' unique intelligence. Some cutsie.

ChrisSherrillReviewed in the United States on July 5, 2020
3.0 out of 5 stars
Okay
Verified purchase
There are some great camera shots, reminders of the extreme beauty of the surroundings, but I do see the points of some reviewers who say that not enough was actually said about ravens and how they demonstrate their intelligence. And the narrator, IMO, was only fair.

BryanReviewed in the United States on February 1, 2021
5.0 out of 5 stars
The beautiful Alm Valley...
Verified purchase
in Austria makes the perfect setting for this program about a population of juvenile ravens living within its borders.

John M.Reviewed in the United States on January 21, 2020
5.0 out of 5 stars
Delightful.
Verified purchase
Delightful, very good narrator.
See all reviews
Back to top
Get to Know Us
Make Money with Us
Amazon Payment Products
Let Us Help You
EnglishChoose a language for shopping. United StatesChoose a country/region for shopping.
© 1996-2022, Amazon.com, Inc. or its affiliates