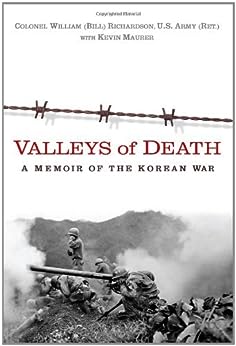 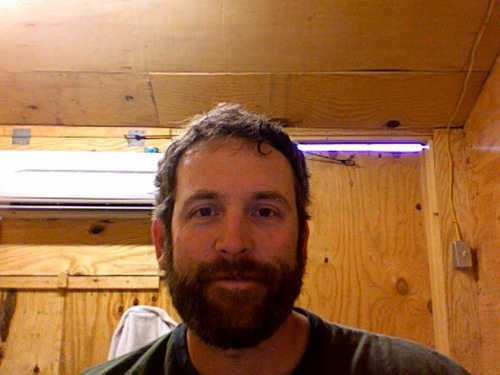 Valleys of Death: A Memoir of the Korean War Kindle Edition

Richardson looks back at the 1950s when he was a master sergeant with the First Cavalry Division in Korea. After U.S. Army occupation duty from 1946 to 1950 in Italy, Germany, and Austria, and the U.N. vote to defend South Korea, he was reassigned to Fort Devens, Mass., to train recruits in weaponry. Shortly after arriving in Taegu, South Korea, their battalion was subjected to North Korean attacks. He recalls both fear and acts of bravery amid the deafening explosions, flying shrapnel, mortar and artillery fire, mass slaughter, bodies lying in piles, and the stunned reaction after a message dropped from a plane: "We were on our own. No relief column was on its way... and if we stayed in this hellhole we would all die." The final third of the book details his torture and starvation during 34 months as a POW, concluding with a short summary of his later military career. Aided by journalist Maurer, Richardson never pulls his punches in these vivid descriptions of bloody combat action, interrupted by occasional flashbacks to his youth on the streets of Philadelphia Photos, maps. (Dec.)
(c) Copyright PWxyz, LLC. All rights reserved. --This text refers to an out of print or unavailable edition of this title.

Colonel William (Bill) Richardson, U.S.A. (Ret.) and his wife Claire have been married for 56 years and have five children. They live in North Carolina. Kevin Maurer is an award-winning reporter who also lives in North Carolina. --This text refers to an out of print or unavailable edition of this title.

4.6 out of 5 stars
4.6 out of 5
91 global ratings
How are ratings calculated?
To calculate the overall star rating and percentage breakdown by star, we don’t use a simple average. Instead, our system considers things like how recent a review is and if the reviewer bought the item on Amazon. It also analyzes reviews to verify trustworthiness.
Top reviews

Amazon Customer
5.0 out of 5 stars Life Changing
Reviewed in the United States on November 16, 2018
Verified Purchase
After listening to the book review on JOKO podcast I knew I had to read this book. Valley's of Death: a Memoir of the Korean War shows the power of a human life and the will to live. This is a graphic novel with stories that make your heart ache and appreciate those that went before you. I recommend reading this book.
Read more
6 people found this helpful
Helpful
Report abuse

CA from C2
5.0 out of 5 stars Consider what he survived...
Reviewed in the United States on January 31, 2019
Verified Purchase
Great first hand account of both combat and life as a POW. It is a great perspective to consider in our own life struggles.
Read more
3 people found this helpful
Helpful
Report abuse

rod.
4.0 out of 5 stars Interesting story of a forgotten war
Reviewed in the United States on April 16, 2020
Verified Purchase
A story of very brave men who volenterred to fight for their country and ended up suffering way beyond human intolerance at the mercy of ignorant and sadistic men.
Read more
One person found this helpful
Helpful
Report abuse

IrishBookWorm
5.0 out of 5 stars Jawdropping book
Reviewed in the United States on November 3, 2018
Verified Purchase
Absolutely amazing book of perseverence, bravery and faith in humanity. Couldnt put it down. Thank you for your service, sir.
Read more
2 people found this helpful
Helpful
Report abuse

Mark49
5.0 out of 5 stars A Great Book!
Reviewed in the United States on June 30, 2020
Verified Purchase
This is a great book for those who want to know a soldier’s and a POW’s story about the Korean War.
Read more
Helpful
Report abuse

Penman
5.0 out of 5 stars Valleys of Death: A Memoir of the Korean War
Reviewed in the United States on October 1, 2011
Verified Purchase
Bill Richardson's patriotism and unfaltering courage cannot be adequately described in a "quickie" book review such as this. One must read his story for themselves.
I was in the service during the Korean War and this is one of the best books on the war that I've read to date. I am saddened to remember that so many, suffered so much, to be so easily forgotten. During its 3 year duration, what Truman would call a "Police Action" cost the lives of 3,000,000 people, including more than 35,000 Americans as well as 8,500 MIA.
Though few recognize it, the Korean War was the precursor of the Vietnam War. The two conflicts, separated by a decade, were inextricably linked. Returning Korean War veterans were spat on and vilified too. Most Americans however, were apathetic toward them, as if they had never been gone. And now, to add insult to injury, it is reported that Ken Burns (producer of the Civil War series) has chosen to skip over the Korean War, one of America's bloodiest conflicts, as if it were no more than a historical speed bump, and move on to the Vietnam War of which he plans to produce, what will surely be another of his excellent visual productions. Selective remembering appears easier for some than others.

Johnnyrgr
5.0 out of 5 stars Highly encouraged read
Reviewed in the United States on January 3, 2015
Verified Purchase
Valley of Death is a great look into what the "forgotten war" (Korea) was all about. Seldom do people realize the volume and intensity of warfare that the Korean War produced and the influence the Chinese had in that war. The detainment portions of the book bring great insight to the savagery of communist ideals and treatment to fellow human beings. Great read.
Read more
2 people found this helpful
Helpful
Report abuse

C. Rinnert
5.0 out of 5 stars I wish I could Hug you ......
Reviewed in the United States on February 11, 2011
Verified Purchase
I have not finished this book but I felt compelled to write a review. I am at the section where the writer is a POW... that is all I will say so I wont ruin it for others.

This book is exactly what I have been looking for. I wanted to read the stories of the Men and Women who were there. Not the breakdown of the logistics of the war but those who served. I would love to be able to sit down with a Man like the writer and spend a day listening to his stories but since I cant this book is a great account of what Hell these men endured. I am ashamed that I never paid close attention to past wars and our American History much until recently. I have also felt a sense of pride being an American and have felt a deep desire to honor our men and women in the Military, but I had no idea how much they really suffered. They suffered for me.

I just wanted to take a moment to say thank you for writing this book and for helping people like myself understand more of what it really was like.

God Bless our Military, those who support them..
Read more
6 people found this helpful
Helpful
Report abuse
See all reviews

anthony Whittle
4.0 out of 5 stars A good read.
Reviewed in the United Kingdom on January 20, 2017
Verified Purchase
Enjoyed the book,have read a few on the Korean war and this is one of the best.
Read more
Report abuse