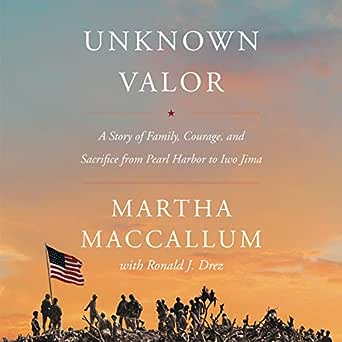 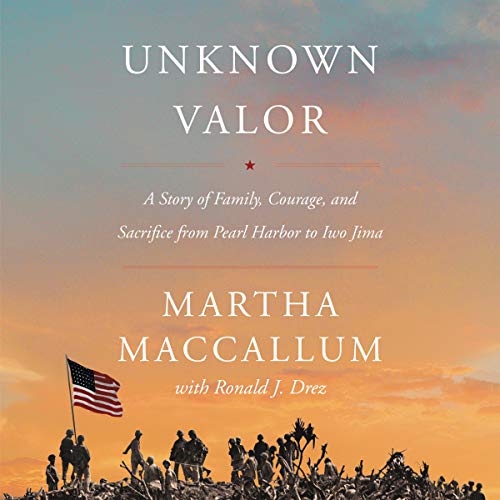 Unknown Valor: A Story of Family, Courage, and Sacrifice from Pearl Harbor to Iwo Jima

4.8 out of 5 stars
4.8 out of 5
184 customer ratings
How does Amazon calculate star ratings?
Amazon calculates a product’s star ratings based on a machine learned model instead of a raw data average. The model takes into account factors including the age of a rating, whether the ratings are from verified purchasers, and factors that establish reviewer trustworthiness.

Serenity...
HALL OF FAMETOP 10 REVIEWER
5.0 out of 5 stars ~~Poignant/Powerful~~
Reviewed in the United States on February 26, 2020
Format: Kindle EditionVerified Purchase
This book is poignant and powerful and the author's descriptions are so vivid one will feel as though they are witnessing these incidents first hand. A gamut of emotions flooded me ...tears for the fallen and happiness for those that survived. A truly incredible read.

It begins with Pearl Harbor and the jubilant sailors enjoying liberty at a big band style competition...This was my first indication of the imagery that would be portrayed throughout this book. 7 DEC 1941....'Tora, Tora, Tora' and the Japanese have managed to complete this act of war on the US. President Franklin Delano Roosevelt's complete speech to the House of Representatives is included. We are familiar with some of his words but seeing it in its entirety is sobering.

Descriptions are detailed and in depth, as well, and the incident with the sailors entrapped in the air bubble for such a length of time will give the reader goose bumps. Vivid and heart rendering. Major battles are covered in detail; letters home are mentioned; memories of survivors from Iwo Jima are recounted. Winston Churchill's visit with President Franklin D. Roosevelt in December of 1941 is recalled, as well. Interesting to read about this meeting. I would be remiss if I didn't mention LCOL Doolittle and the B-25's. Another feat that was unheard of in this era.

As a reader, this book is so well balanced with both the war actions in both Europe and the Pacific that it stands head and shoulders above any other I have read previously. I love the fact that the members of the US Marine Corps are depicted as the warriors they are. love of country, love of their comrades in arms and life long commitment to the Corps. Semper Fi...

Poignant and powerful read for me. Just imagine being able to write about your Uncle Harry and his Marine Corps buddies. Sacrifice, heroism, and love of country... A must read for those interested in WW II from the beginning to the end.

Rick Shaq GoldsteinTop Contributor: Baseball
5.0 out of 5 stars RICK “SHAQ” GOLDSTEIN SAYS: THESE FRESH-EYED BOYS ARE EAGER TO SERVE A CAUSE BIGGER THAN THEMSELVES
Reviewed in the United States on February 26, 2020
Format: HardcoverVerified Purchase
The heroic… historic… costly… irreplaceable… significant… story of the United States… agonizing… victory at Iwo Jima in World War II… has been told many times before… and will most likely be told many times again. So what makes this particular story worth reading for people who already know the story… let alone… the unenlightened people who don’t?

The reason the rendering of this event which claimed almost seven-thousand Marines their lives… as well as wounding twenty-two-thousand others… over a thirty-six day period… and was surely… (Though not proven biblically)… thirty-six days where hell truly opened up on earth…. is truly worth reading is because of how the author… TV commentator, Martha MacCallum… has accomplished… the rare feat of not only telling her families story… our countries story… the world’s story… but consistently… and very nearly… totally seamlessly… linking all of them together… with the reader being the beneficiary… of true heartfelt feelings and emotions… broad brush… and amazingly… simultaneously… down to the feeling of a single aching heart beat… in the loss of an individual.

The historical research and reporting from before Pearl Harbor till the end of the war… is worthy of any educational pursuit… but Martha sharing her families story… which includes an Uncle dying early pre-war… and another Uncle trying to fill his brother-in-laws responsibilities as a Father… while still being a Father to his own family. In the middle of… and intertwined with other millions of families’ patriotic plight is the nephew Harry Gray aching every second of his life… to become old enough to enlist and go fight the “J-ps”. Pearl Harbor “had stoked the fire of revenge in the hearts of Americans. It was Japanese pilots who had dropped the bombs, and Japan must pay the price.” “I’m going to kill J-ps” “That was the cry of the boys on the recruiting lines and the fervent goal of the President who had declared that the day of the Pearl harbor attack was a day of infamy and that victory over Japan was the only option.”

From a little girls favorite time of having whip cream put on her hot chocolate at a restaurant being interrupted when the world as we knew it changed on December 7, 1941… to the Raping of Nanking… where over one-thousand woman a day were raped... and when “a Marine named Sid Philips remembers being sent with other troops to recover the bodies of U.S. troops on Guadalcanal. When they found them “they had been beheaded, their genitals stuck in their mouths.” “After that, says Philips, shaking his head, “we never took another prisoner.”

In the midst of this there are letters home to family members… teenage infatuation… women joining the manufacturing force… to assuredly help win the war… where “at Ford, massively converted assembly lines build B-24 Liberator bombers, turning out one very sixty-three minutes.” Martha eloquently reminds us that it was a time when forty-one year old movie star Clark Gable enlisted. “He enlisted in secret to avoid the crush of fans that swarmed his buddy Jimmy Stewart when he enlisted. Gable says about being a man and a soldier, “He must be ready to choose death before dishonor without making too much song and dance about it. That’s all there is to it.”

As I am an Honorably Discharged Viet Nam Era Veteran… I also look and study with respect… my military brothers and sisters that came before… during… and after me. The true patriotic service and sacrifice… that came before… (As described in this book) was truly… in my heart and mind… a better… more special time. Martha does such a wonderful… touching tribute… to the total sacrifice… commitment… horror… and ultimate victory… not only at Iwo Jima… but in the soul of America at perhaps its greatest time!
Read more
30 people found this helpful
Helpful
Comment Report abuse

Donald A. Thompson
5.0 out of 5 stars Overlooked heroism
Reviewed in the United States on February 28, 2020
Format: HardcoverVerified Purchase
I couldn't put this book down. It is a history of 3 things: (1) what life was like in the US during WW2; (2) the war in the Pacific; and (3) the war from the perspective of the men who did the fighting, including her uncle who was killed on Iwo Jima. It gave me a new appreciation of what they had to go through to keep the horror of feudal Japanese militarism away from our shores. Before this book, when I thought of a warrior that represented the heroism of the Pacific war, I thought of John Basilone. Now I think of Basilone and Harry Gray. Great writing, Martha. And thank you.
Read more
20 people found this helpful
Helpful
Comment Report abuse

Edmund Jimenez
5.0 out of 5 stars Valor and sacrifice from another time
Reviewed in the United States on March 1, 2020
Format: HardcoverVerified Purchase
There are two distinct components interwoven into the body of Martha MacCallum's new book.

First, there is the military/diplomatic historical background of relations between the United States and Japan. As such, it's a very useful guide to highlights of the Pacific war (1941 - 1945)--and before.

The second element delves into the lives of a few American families whose young men took up arms in defense of their country. Their stories are heartwarming and heartbreaking. On a number of occasions while reading, I simply cried many tears. This seems odd because in the mountains of Viet Nam I never shed a tear, nor felt a strong emotion, when a fellow trooper was killed in action. Yet, MacCallum's book had me literally sobbing--for the dead, and the effects on family.

Despite many decades of published material describing the fighting in exposed and confined spaces on Pacific islands, this book still has the power to evoke awe in the mind of the reader, for the sacrifices and accomplishments of our fighting men during the war against Japan.
Read more
14 people found this helpful
Helpful
Comment Report abuse

Richard V
5.0 out of 5 stars Marthers book
Reviewed in the United States on February 28, 2020
Format: Kindle EditionVerified Purchase
I liked this book a lot. It was sad and happy at times. I feel Harry would have been a great citizen after the war. We lost so many of our men and Hirohito got let off. So sad. Only found two errors in the book. I recommend it to all, a great read and a piece of our history that needs to be remembered
Read more
13 people found this helpful
Helpful
Comment Report abuse
See all reviews from the United States