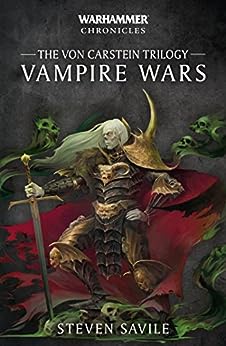 The von Carsteins were the most infamous bloodline of vampires to ever stalk the Warhammer Old World. Their very names – Vlad, Konrad and Mannfred – were whispered in fear by the people of the Empire, conjuring up images of doom, death and destruction. Charting the vampire family's rise to power in the shadowhaunted lands of Sylvania and their centuryspanning wars with the Empire, this omnibus edition collects all three of Steven Savile’s classic von Carstein novels into one goredrenched volume.

Read it Because
Vlad, Konrad, Mannfred – names that echo through history (and in the latter case, even into the Mortal Realms). But who were they, and how was their threat to the Empire defeated? Read this clasic trilogy and find out.

British author Steven Savile is an expert in cult fiction, having written for a wide variety of sf series, including Star Wars, fantasy and horror stories. He won the L Ron Hubbard Writers of the Future award in 2002, and has been nominated three times for the Bram Stoker award. He currently lives in Stockholm, Sweden. --This text refers to an out of print or unavailable edition of this title.

Steven Savile has written for Doctor Who, Torchwood, Primeval, Stargate, Warhammer, Slaine, Fireborn, Pathfinder, Arkham Horror, Rogue Angel, and other popular game and comic worlds. He won the International Media Association of Tie-In Writers award for his novel, SHADOW OF THE JAGUAR, and the inaugural Lifeboat to the Stars award for TAU CETI (co-authored with International Bestselling novelist Kevin J. Anderson). Writing as Matt Langley his young adult novel BLACK FLAG was a finalist for the People's Book Prize 2015. His latest books include SHERLOCK HOLMES AND THE MURDER AT SORROWS CROWN and PARALLEL LINES a crime novel from TITAN, as well as GLASS TOWN and COLDFALL WOOD from St Martins Press.

Robin
5.0 out of 5 stars This book is a classic, must read for those interested in Vampire novels.
Reviewed in the United States 🇺🇸 on July 6, 2022
Verified Purchase
I like the story line. It is well written and and dramatic.
Read more
Helpful
Report abuse

Jonny
1.0 out of 5 stars Full of inconsistencies
Reviewed in the United States 🇺🇸 on August 7, 2021
Verified Purchase
I think this is the only 1 star review I have ever given anything. Minor spoilers ahead:

The first book, Inheritance, was good. Well written and engaging. Except for Middenheim falling to siege (the first time). I don't recall any mention of the Faushlag Rock at all. And then I get to the second book, Dominion.

We're introduced to the most undwarflike dwarf ever. Who has more knowledge of the human Gods of Morr (saying the dead need money for passage) and Sigmar than his own Gods. Who is apparently only "Grimna." Every sentence about the dwarf was just wrong, and made it hard to read anything about him. It's like the author has absolutely no knowledge of warhammer dwarf lore.

The characters also frequently forget things that they themselves had established only 20 pages before (i.e. a missing body that they knew about, and then went back to the grave and were surprised the body was missing)

And then Middenheim falls to siege a second time. Again, no mention of the Fauschlag Rock. In fact the book only mentions the city has "towering walls" and that archers rained down arrows from said walls. And the defenders "sallied forth onto the plain" when in every other mention of Middenheim I can think of specifically states the Fauschlag Rock rises abruptly from the forest. No mention of the viaducts either. It's as if the city is just some random city. I haven't even finished the 2nd book yet but this is by far the worst omnibus I have read simply because of inconsistent lore and basic lack knowledge about the WHF universe on the author's part.
Read more
2 people found this helpful
Helpful
Report abuse

M
5.0 out of 5 stars Great read
Reviewed in the United States 🇺🇸 on December 4, 2021
Verified Purchase
Very good book if you are a Vampire counts fan you wont be disappointed
Read more
Helpful
Report abuse

Charles
5.0 out of 5 stars Classic Grimdark
Reviewed in the United States 🇺🇸 on August 6, 2020
Verified Purchase
I got into this through playing the Vampire Counts on Total War Warhammer. It’s definitely a good read and classic grim darkness that is a hallmark of Warhammer. Anyone who is a fan of old school vampire tropes would like this as well since the Von Carsteins are or were portrayed as the classic vampire.
Read more
4 people found this helpful
Helpful
Report abuse

Melissa 'Dog/Wolf Lover'
4.0 out of 5 stars Vlad!!
Reviewed in the United States 🇺🇸 on October 27, 2019
Verified Purchase
I absolutely loved this book! I recommend to all hard core vampire lovers!!
Read more
One person found this helpful
Helpful
Report abuse

The Bruce
3.0 out of 5 stars Nothing Special
Reviewed in the United States 🇺🇸 on February 6, 2011
Verified Purchase
I didn't expect to care for it, since it's about vampires & werewolves, so if people think I'm being unfairly biased, they're probably right.

But, seriously, this collection of stories is just not -- IMO -- up to the standards of Warhammer Fantasy. It's just nowhere near as good as books like the Blackhearts Omnibus, or Mathias Thalmann: Witchhunter, or Brunner the Bounty Hunter, much less true classics like Gotrek & Felix. The characters are merely average, the stories seem like standard European vampire tales transposed to Warhammer, the only heroes worth cheering for are relatively minor characters (one of which isn't even truly worth cheering for), & worst of all, there isn't even the sort of "enjoyable" evil you'd get with Skaven -- no sense of fun or joy, just dull, drab, dreary vampires.

Blecch. I was hoping for something like Mathias Thalmann: Witch Hunter.
Read more
5 people found this helpful
Helpful
Report abuse

mary
4.0 out of 5 stars Not bad has open end
Reviewed in the United States 🇺🇸 on February 28, 2019
Verified Purchase
I'm tired of the Vampire as lover's reading. They read essentially the same. This gets back to true vampire, an alpha predator of human beings! The blood, cold blooded, and the like reads like an old time vampire novel.
Read more
7 people found this helpful
Helpful
Report abuse

Ren
5.0 out of 5 stars Blood for the Von Carsteins
Reviewed in the United States 🇺🇸 on August 4, 2020
Verified Purchase
Vampires vs the Empire. Three books in one bloody collection that covers the years of Von Carsteins reign of terror.
Read more
Helpful
Report abuse
See all reviews

DanT
4.0 out of 5 stars another warhammer triumph
Reviewed in the United Kingdom 🇬🇧 on July 20, 2008
Verified Purchase
vampires of the old world are really very unpleasent creatures, which is great. If they weren't the vampire wars might instead have been the vampire dinner parties, now that would be a terrible book to read.This on the oher hand is a very good book to read.
Without giving much away, vampires want dominion over the old world [Setting for these books] and the way to achieve this is in good old vampire fashion, sucking blood, raising the dead, shape changing, torture and teariring their victims apart to gorge on their flesh. not habits for polite society, so they have to be thwarted.
Enter the heroes, some briefly, vampires are quite efficient. diverse and interesting all fighting for the same thing but not always combined.
If had read these books seperately i would have said the first one was a bit slow to get going but as an omnibus it creates a sound base for the others, witch clip along quite well.
So if you like vampires, fantasy, gore, heroes and some decent plots you won't be dissapointed.
Read more
5 people found this helpful
Report abuse

E.J.S
3.0 out of 5 stars Not as good as I was expecting
Reviewed in the United Kingdom 🇬🇧 on February 26, 2019
Verified Purchase
I’ve read a lot of warhammer 40k books, so I decided to give the “old world” books a try. After a promising start, I found myself losing interest, and gave up about 3/4 in. Found it to be very average
Read more
One person found this helpful
Report abuse

Hope Mirin
1.0 out of 5 stars ????
Reviewed in the United Kingdom 🇬🇧 on August 4, 2021
Verified Purchase
Item did not appear after much anticipation. These books are normally high price so I should have known better. Thank fully Amazon sorted me with a refund for my son. Disappointing and waste of time but hey!
Read more
Report abuse

Gary Simkins
5.0 out of 5 stars Great value
Reviewed in the United Kingdom 🇬🇧 on April 23, 2020
Verified Purchase
This is value for money.
Its a grim dark tale even more so than your usual warhammer books
Its hard not to recommend this when it is well written and a huge 3 book story.
I loved it
Read more
One person found this helpful
Report abuse

David Richard
5.0 out of 5 stars Brilliant book around a fantastic theme
Reviewed in the United Kingdom 🇬🇧 on May 31, 2019
Verified Purchase
Love the themes within this book, very atmospheric. A little cheesy at times but suitable for all ages
Read more
One person found this helpful
Report abuse
See all reviews
Report an issue
Does this item contain inappropriate content?
Report
Do you believe that this item violates a copyright?
Report
Does this item contain quality or formatting issues?
Report