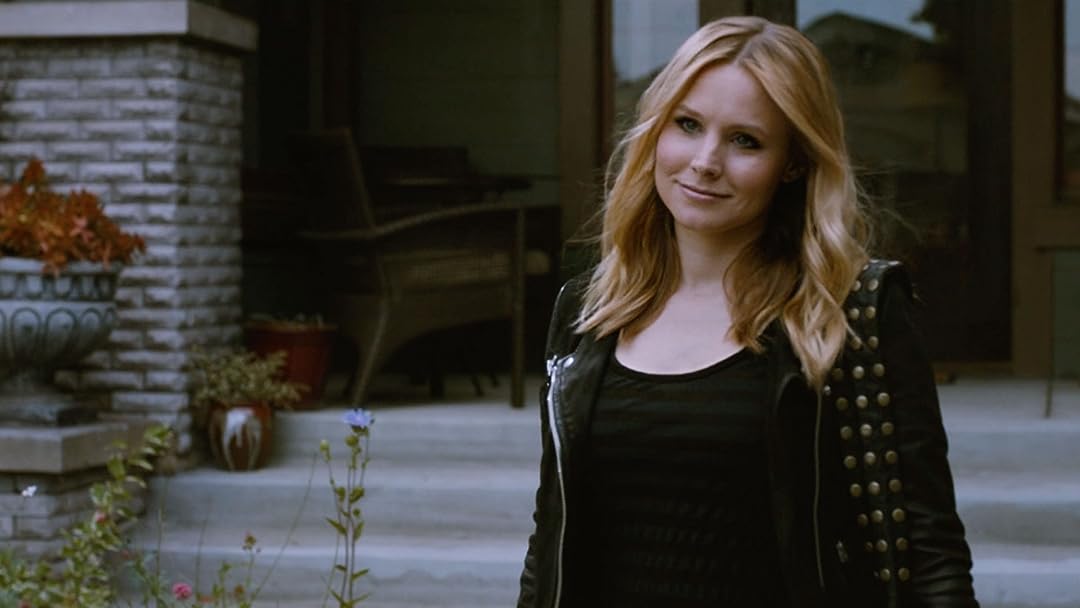 (8,177)
6.81 h 47 min2014X-RayPG-13
Years after walking away from her past as a teenage private eye, Veronica Mars gets pulled back to her hometown, an ex-boyfriend with baggage, and an unraveling murder mystery.

SylviastelReviewed in the United States on March 25, 2018
4.0 out of 5 stars
We Need More Kickstarter Campaigns Out There!
Verified purchase
I watched the entire series on DVD and soap net and became a fan. I feel shortsighted into the film. I am grateful that almost the entire cast came back but I was surprised by Jerry O'Connell playing Sheriff Dan Lamb. Michael Muhney was the original actor in the role on the series. The film performance lasted perhaps a minute and I'm puzzled as to why he didn't return to the film even for the brief cameo. His character was killed off in the series anyway.

I was glad to see Kristen Bell as Veronica Mars. She played her in the series and the film with such force. Veronica Mars was the daughter of a Southern California sheriff played by Enrico Colantoni. The series had a lot more humor than the film does in my opinion. Thankfully, the film was made with fans in a Kickstarter online campaign. I was happy to see original faces and some cameos. Veronica Mars had unlikely appeal on television. Her character was beautiful, smart, witty and clever to learn secrets and solve crimes. After three seasons, the series was canceled. The fans never forgotten their Veronica Mars series.

BeksReviewed in the United States on August 27, 2019
5.0 out of 5 stars
A Long Time Ago...
Verified purchase
This was the movie the fans wanted and deserved. I loved absolutely everything about it. It brought back old favorites from Mac and Wallace, who continued to help Veronica with her investigations, even while knowing it might get them in trouble, Dick was his usual douchey yet loveable self, Keith and Veronica's snarky father/daughter repartee which is always delightful, but most of all, it brought Logan and Veronica together to solve a crime similar to what brought them together in the first place. Veronica thought she grew out of the private eye business, but with her new law degree and expertise, she has an opportunity to really do something special, which she does. I absolutely adore this movie and will watch it over and over again.
6 people found this helpful

Kira S.Reviewed in the United States on August 19, 2021
4.0 out of 5 stars
Mixed bag
Verified purchase
I just rewatched the three seasons of Veronica Mars that Amazon has (apparently Hulu has a fourth season - not going there) plus this movie. The first two seasons were great. The third season was not quite up to the standards of the first two but it was all right until the very abrupt end. The movie - sure, it was nice seeing some of the familiar faces and catching up with what they've been doing with their lives. But Veronica has a law degree, all she needs to do is take the bar exam. Why on earth doesn't she just practice criminal law in Neptune instead of corporate law in New York? Makes perfect sense, right? She can hire her own investigator (her father of course) but she would get involved with the investigations as well, you know she would. I can think of so many ways this movie could have been better. Oh well. I guess it satisfied most Marshmallows. My fault I want not just a marshmallow, but the whole s'mores.
One person found this helpful

MJReviewed in the United States on March 5, 2021
1.0 out of 5 stars
want to pay for garbage case and shipping? SKIP THIS COMPANY
Verified purchase
I love Veronica Mars series and bought the first 3 seasons a while ago on dvd and so I wanted the movie on dvd as well not bluray. For a long time i waited to find it as a dvd and finally I did but I would need to pay shipping $2.99. Still it said it was coming from Hollywood company where it normally says sold and bought from Amazon. Next thing I know is I paid and shipping was $3.99 from some fun 4 game which is in new york. I am not pleased the case was a junk one of recycled so its thin and not protection from anything else being shipped around/on it but the art work was ripped and clearly case was broken at seem snd discolored on inside. I fony appreciate change of sellers or shipping cost aand especially cheap thin recycled dvd cases in a thin bubbled envelope. I am all for recycling HOWEVER, I am not a fan of the massively thin recycled cases and envelopes I am tired of paying for better dvd cases or the slim thin ones just because the people selling don't care much about quality. I dont enjoy waiting for a movie to arrive and then get crap cases and sometkmes a dcratched dvd. I would go with blu-ray as they haven't begun to do crap cases but for now i have to use older laptop that can't play blu-ray and i want to test them oug immediately in case theres an issue

littlemac2Reviewed in the United States on July 8, 2018
5.0 out of 5 stars
The last of Veronica Mars?
Verified purchase
this was a good movie. A lot of the original characters were part of the story line. It was typical veronica mars mystery. Kristen Bell is a little heavier than her past episodes but recognizable, and she is still sassy as ever. The story line is about one of her old flames being accused of murder. No one of the old gang has kept in contact for 10 years. Veronica shows up with a law degree and preparing for her bar exam and looking for job prospects. She has a future husband prospect as well. Nothing goes as planned except veronica's insatiable appetite for solving a mystery. She gets sucked in and the rest is what you'd expect from veronica mars.
5 people found this helpful

CarolineReviewed in the United States on January 1, 2019
2.0 out of 5 stars
Disappointing ending to a good original series
Verified purchase
Disappointing. Didn’t have the same mix of intrigue and humor that made the original series so captivating. And I disliked both the premise (what their lives had been like for the last decade) and the ending (who she ends up with). They had such an opportunity here to give the fans some great closure (like Serenity did for Firefly) but in my opinion they blew it.
5 people found this helpful

med_bookwormReviewed in the United States on February 2, 2016
4.0 out of 5 stars
Fans of the TV series will enjoy this reprise
Verified purchase
As a fan of the Veronica Mars TV series, it was great to see this cast reunion. The plot and characters are all back to form; however, I was a bit sad that they chose high school reunion/local mystery as there was a trailer produced shortly after the series ended advertising Veronica Mars: FBI. It was a bit disappointing that her character became a corporate lawyer in this movie instead of an FBI agent! Nevertheless, if you're a Veronica Mars fan, you can safely view this! The only character missing is Duncan--guess he is permanently banished to Australia (or another undisclosed location) with his child.

If you haven't seen the TV show, I would recommend watching at least the first two seasons before watching this film. The two seasons are the best with each show having its own mini mystery (or mysteries) and also developing the big mystery over the entire season. The first seasons story arch is so well done with so many red herrings and the clues so timely delivered to keep in moving but not to give it away until it is time for the suspenseful finish. Combine that with the witty banter and multi-faceted characters and you get excellent drama! Unfortunately, once the show became popular, in the first half of the 3rd season, they started focusing on the on/off again romance drama and put less effort into the mysteries leading to a ratings drop and the show not being renewed. The 2nd half of the 3rd season resurrected the best in the show writing but unfortunately did not save the series.

TiffanyReviewed in the United States on October 26, 2015
5.0 out of 5 stars
Epic
Verified purchase
I can't say enough good things about this movie. I was a huge fan of the TV series, so when the Kickstarter campaign came along I was excited to see how the movie turned out. If you never watched the TV series, you will still find the movie entertaining, although you will miss the Easter Eggs left in the movie. If you get a chance go back and watch the series, I do believe it is still free on Prime and you won't be disappointed.

Great opening sequence, laying the foundation to her being a young PI growing up, now a grown up soon to be lawyer who was brought back home by the love of her life and his pending murder charges and the dreaded 10 year high school reunion - Ahoy! The movie did a great job of bringing the characters back, but I wish the movie included a bit more of the friendship relationships between Veronica, Mac, Wallace, and of course Dick. The movie itself was more of an extended version of the series, but filled the deep void for us marshmallows that were devastated when the series was cancelled. And of course the relationship between Veronica and Logan is epic! I'm on to reading the books now.
8 people found this helpful
See all reviews
Back to top
Get to Know Us
Make Money with Us
Amazon Payment Products
Let Us Help You
EnglishChoose a language for shopping. United StatesChoose a country/region for shopping.
© 1996-2022, Amazon.com, Inc. or its affiliates