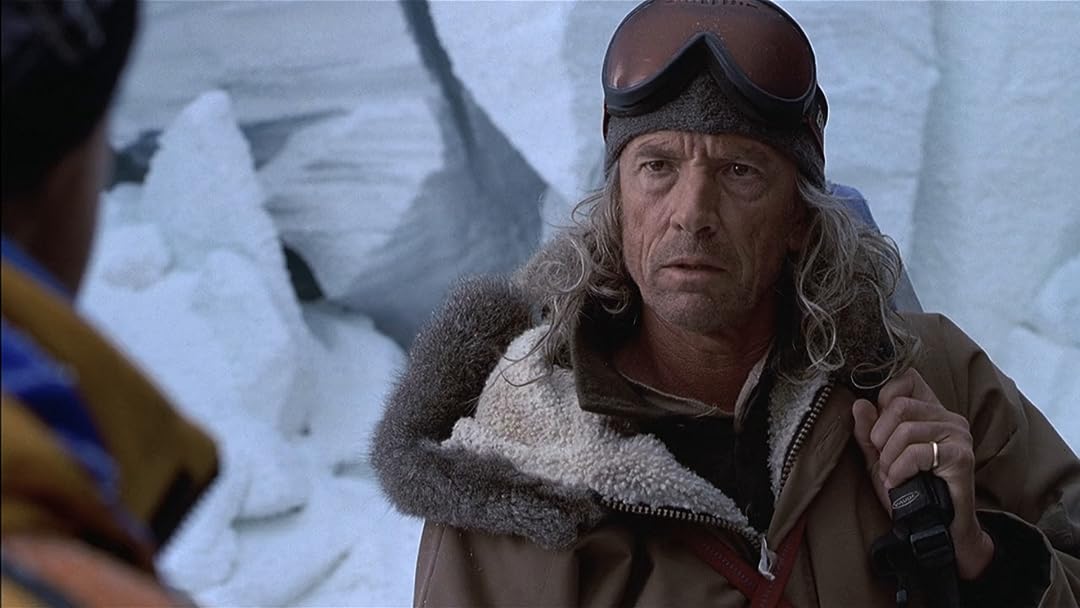 Amazon CustomerReviewed in the United States on September 14, 2022
5.0 out of 5 stars
Love it
Verified purchase
Good action movie

Beverly L. HansenReviewed in the United States on August 17, 2022
5.0 out of 5 stars
Heart stopping action that will leave you on the edge of your seat
Verified purchase
I have watched many climbing movies. This is by far the best. I found my heart racing more than once, cheering on the rescuers and caring for all of the main characters.
Believable story line, excellently told, with beautiful scenery.
One person found this helpful

TinmanReviewed in the United States on August 19, 2022
5.0 out of 5 stars
Intense drama.
Verified purchase
Enjoyed this movie keeps you in suspense from the very start of the movie. Enjoy with friends.
One person found this helpful

Michael RovinskiReviewed in the United States on March 2, 2022
4.0 out of 5 stars
DVD quality, but amazing movie
Verified purchase
Vertical Limit is the kind of "B" tier movie that many might overlook, but a closer look shows a movie that is engaging and well-done. The cast is quite good, most notably Bill Paxton who gets to play a character with some wide range. If you're looking for a movie about survival that will take itself seriously, but not afraid to lean into action elements, then I think I've found a movie for you.
One person found this helpful

K. A. JonesReviewed in the United States on August 2, 2012
4.0 out of 5 stars
Verticle Limit...a feast for eyes & ears
Verified purchase
I recently picked this up in the "under $10 bin". I've considered this a decent popcorn movie that's not going wow people but not born them to death either. Plus not one you see over-and-over again on cble or dish.

Not having the movie at all on DVD gave me a chance to see it in full length in BR format. I won't dive into the story details as it's been put out before but mainly talk about the video and audio presentation in BR format.

Video Quality:
Off the bat...outstanding. You get a sense of awe of mother nature's glory in the 1:85 presentation. At times you feel like you're watching a National Gepgraphic show with the majestic landscape of mountain range with snow everywhere. With blue skies and rocks covered in snow you get some great contrast of the characters in their "Bright Winter Outfits" of yellows, blues, greens & reds. Some of the closeup shots of the characters weathered faces is excellent. Overall the PQ is quite excellent and one that actually will surprise many.

Audio Quality:
To say I was stunned at the audio presentation would be a slight understatement. I was expecting something with storms and avalanches but not at this level. And it wasn't one or two quick scenes as you get in many movies but in several instances throughout the film I got thrown in the middle of action. Not too many times the surrounds share equal time with the front stage in a film but with Vertical Limit it did so in a outstanding way. At the 33 minute mark when the rescue team is trying to get off the helicopter in the middle of the storm, the sound puts you right in the middle of it. You're getting wind, snow and the helicopter is buzzing right next to you, front of you and behind you. I must have played the scence five times. Though you don't get a fancy DTS-HD track you still get a solid D.D 5.1 but it's the PCM 5.1 (uncompressed) track that's a ear catcher. It's very robust and really packs a punch providing a solid effort on all channels.

yes the movie doesn't have a great storyline though I thought still good enough. But if anything the visual display along with a excellent audio presentation both in action and score should make this worthwhile. Those with large TVs and a kick butt sound system should consider this.

Barron LaycockReviewed in the United States on September 12, 2002
4.0 out of 5 stars
Neat And Superbly Filmed Thriller!
Verified purchase
What a fabulous cinematic experience, both in terms of action and photography values! Yet this is an experience without a real story, with characters bumping into each other and the furniture, to twist Spencer Tracy's sage advice about what acting is all about. Chris O'Donnell's character is all over the place, brooding, remorseful, a somewhat milquetoast character who somehow seems to be quite sure of himself all at the same time. His sister, on the other hand, seems to suffer from some terrible form of terminal emotional constipation, yet she is supposedly acting out some emotional psycho-drama inspired in large part by her sainted dead father's memory. Bill Paxton plays a shady and insipid yuppie type character so shallow his teeth glow in the sunlight, and only Scott Glenn lends any kind of real and authentic acting credibility to this unlikely potboiler.
All that said, it still represents a terrific way to spend some quality time gazing at the terrific landscapes, action sequences, and wonderful cinematography that the director continually throws our way, and the action sequences in particular are stunning and very realistic. While anyone familiar with climbing can spot a number of technical errors in both the storyline and the way the accidents and subsequent rescue attempts are depicted, there is a lot in the way this film was made to recommend it in terms of enjoyable movie entertainment.
Especially noteworthy was the way the climbing sequences were filmed, which required a lot of technical expertise on the part of the actors, and lent itself well to telling the story through their actions and interactions. And while the plot was so trite and silly as to be laughable, you will find yourself absorbed by the sequence of events depicted and the suspense-filled and breathless pace at which events seem to transpire, crowding each other off the screen for the next sequence. Not a real mind-twister, but not abad way to wile away a rainy Sunday afternoon. Enjoy!
3 people found this helpful

Shirley HarmonReviewed in the United States on June 15, 2022
5.0 out of 5 stars
Did a great job on time it was great.
Verified purchase
Liked movie

David W WhitneyReviewed in the United States on May 29, 2022
5.0 out of 5 stars
Great movie!
Verified purchase
Excellent. Always on the edge. Great photography.
See all reviews
Back to top
Get to Know Us
Make Money with Us
Amazon Payment Products
Let Us Help You
EnglishChoose a language for shopping. United StatesChoose a country/region for shopping.
© 1996-2022, Amazon.com, Inc. or its affiliates