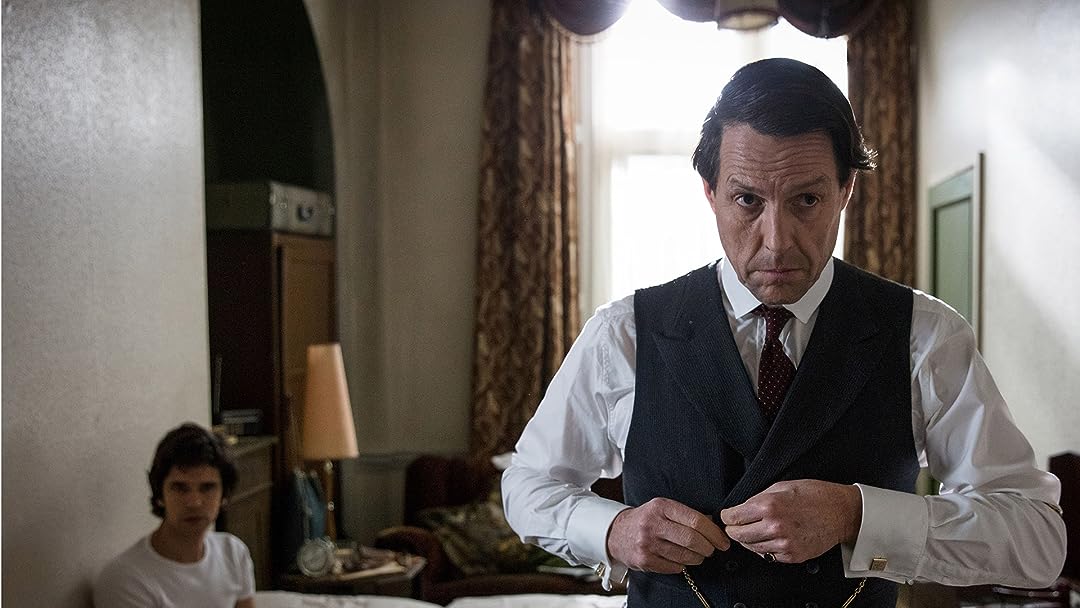 Season 1
(997)
7.72018X-RayUHD16+
The shocking true story of the first British politician to stand trial for conspiracy to murder. Jeremy Thorpe (Hugh Grant), the leader of the Liberal party, has a secret he's desperate to hide. His ex-lover Norman Scott (Ben Whishaw) is putting Thorpe's brilliant political career at risk so Thorpe schemes and deceives until he realizes there’s only one way to silence Scott for good

Mark BitterlingReviewed in the United States on December 8, 2018
1.0 out of 5 stars
Please stop promoting this garbage
The show is simply awful.

I was not going to waste my time giving a review because others have already addressed the many failings of this unpleasant heavy handed propaganda film, but Amazon will not allow me to move on.

It is one thing for Amazon to have horrible content; it is completely another thing to try to continue to try to force feed it.

Practically every time that anyone in the family watches any program on Amazon Prime, they are inundated with commercials for this tripe. Even when the kids are watching cartoons, Amazon repeatedly hits them with this.

Some of you may think that the show is somehow good, but no rational person would ever imagine that it is appropriate for young children to be encouraged to watch a sexual predator use Vaseline to have his way with a minor.

BpollenReviewed in the United States on June 30, 2018
5.0 out of 5 stars
Really, really, REALLY captivating miniseries.
No one does these sorts of scandal dramas as well as the British. This is an engaging watch from scene one to the end, as it tells a comedy of errors, if it were a comedy. Which it's not. That's not to say it doesn't have its humorous moments. Grant is one of those actors who can do both drama and comedy, sometimes in the same scene. A powerful, high level gentleman decides to one-off a problem from the past. Of course, he knows nothing about such things, so passes it to someone else, who also knows nothing of such things so passes it to someone else, and so on and so forth. Based on real events, the ending shouldn't surprise anyone. Hugh Grant has transitioned into high quality interesting middle aged leading male roles, like this one. Still handsome, charismatic, and a superb actor, I can't take my eyes off him, when he's on the screen. Hugh Grant with dark eyes? Hugh Grant as a gay man? Yep. And TOTALLY believable. Ben Whishaw, who plays the young love interest, was the perfect choice. Grant, surrounded by high level captivating actors and their characters, runs with the film full stop. Stephen Frears was the director and got it right. I hope Amazon produces more like this. (And more Hugh Grant!)
239 people found this helpful

CB2Reviewed in the United States on July 5, 2018
5.0 out of 5 stars
Hugh Grant does not disappoint
Verified purchase
Excellent, well paced, well written and fabulous acting.
76 people found this helpful

Micah J WestReviewed in the United States on November 8, 2018
1.0 out of 5 stars
The first scene is about homosexual sex... seriously?
Wow - I turned this off after the first scene... Is all of television about sex any more? Seems it's difficult to find anything decent and uplifting to watch.
109 people found this helpful

TalleyReviewed in the United States on July 1, 2018
5.0 out of 5 stars
Funny, Sad, Complex, and Highly Recommended
A funny, sad, fascinating, intelligent miniseries. Hugh Grant’s performance is a revelation. Here is the charm we’ve come to expect from him but now there is a reptilian quality to it. His performance is nuanced and we see so many aspects of his character - the facile charm, the sadness, the manipulativeness, the selfishness - much relayed in just subtle facial expressions. Ben Whislaw’s performance is equally strong and complex - Norman’s naivety, his manipulativeness, his charm, and his willingness to use others are all there.
What makes this miniseries so interesting is that we see the impact of society’s disapproval of their relationship not only in their lives but in how they see themselves. Again all this is done with great subtlety. And these characters, despite different ages, classes, circumstances, and power, are actually more alike than dissimilar. Both move through life using their charm to get want they want. They’re both users of others. Yet they remain very much three dimensional characters. They aren’t put into convenient boxes. I found myself throughout being charmed and appalled by their behavior and sympathetic to their situations.
It’s such a pleasure to see something this complex and enjoyable.
116 people found this helpful

Katie CReviewed in the United States on July 1, 2018
5.0 out of 5 stars
A Must Watch for Hugh Grant Fans
Verified purchase
A Very English Scandal Review.
Reasons to Watch This MiniSeries Right Now:
1. If any of you are a fan of Hugh Grant's movies especially his recent biopic movie "Foster Jenkins" (2016), then this miniseries will not be a disappointment! The scripts incorporate some humor, even at the "love scenes", and this use of humor really lightens the atmosphere of this film with deals with what was deemed as controversial themes. I find too many biopic projects to be too depressing at times. In comparison I would say that role as Jeremy is a bit darker than the past comedic characters Hugh Grant has played in the past. This is not one of those series that designates a specific antagonist. Those labels are really left to the audience to decide and I love that the miniseries shows both sides of the story from both parties.
2. More or less accurate representation of the 1960s to 70s. Everything from the soundtrack to the fashion and sets. More importantly, this mini series perfectly captures the generational division through the different ideals and social attitudes held by the older generation vs younger generation. Old liberalism vs new liberalism.

Though I found some parts of the mini series to be moving slow, the content/plot itself is present in a very creative, humorous, in depth manner.
77 people found this helpful

Tara DobynsReviewed in the United States on August 15, 2018
1.0 out of 5 stars
How to ruin a binge-worthy series
Actually, the series is excellent, it's the delivery that sux. Closed Captioning is essential to the deaf community, but Amazon (or the entity which provides the video) are indifferent, so some content provides CC, some doesn't. I was able to watch 2 episodes, then endured the frustration of seeing the action, but not the (con)text.

Amazon knows this, but seems to shrug and say, "eh, whuh...?" So I'm left with giving bad reviews. It's my only voice. Deaf and dumb, at least to Amazon.
82 people found this helpful

Mary L. JohnsonReviewed in the United States on September 20, 2018
1.0 out of 5 stars
Will never see Hugh as a leading man...I'll always imagine him trolling for boys.
Breaks my heart to see Hugh Grant in this role and it did have undertones of pedophilia with that boy he slept with. Come on Amazon. You can do better than this!
69 people found this helpful
See all reviews
Back to top
Get to Know Us
Make Money with Us
Amazon Payment Products
Let Us Help You
EnglishChoose a language for shopping. United StatesChoose a country/region for shopping.
© 1996-2022, Amazon.com, Inc. or its affiliates