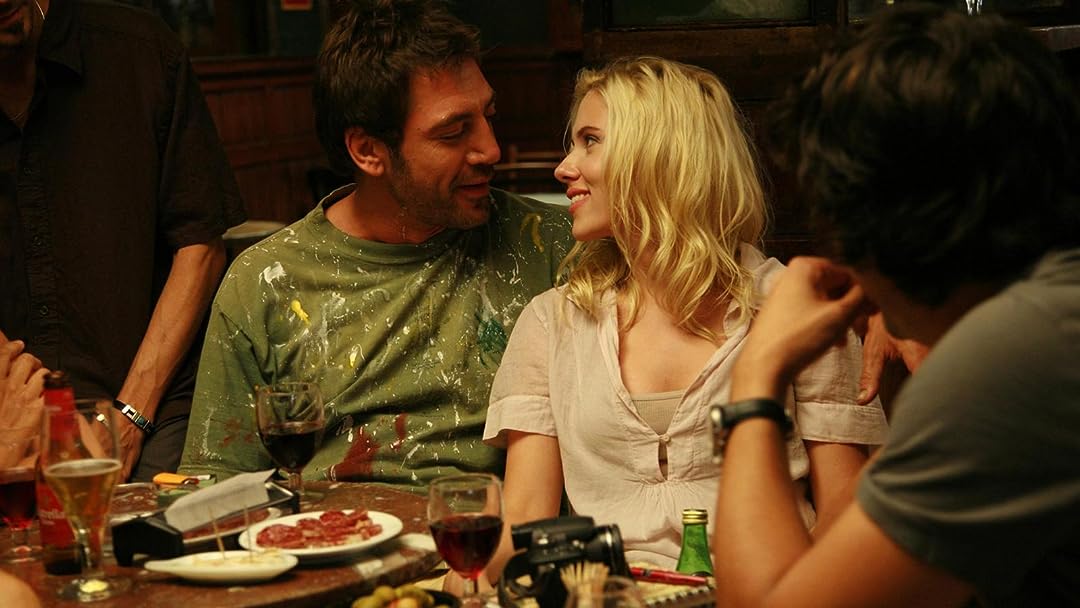 (2,304)
7.11 h 36 min2008X-RayPG-13
Two girlfriends on a summer holiday in Spain become enamored with the same painter, fully unaware that his ex-wife, with whom he still has a tempestuous relationship, is about to re-enter the picture.

DragonflyReviewed in the United States on May 2, 2018
5.0 out of 5 stars
Excellent Movie not you normal cup of coffee.
Verified purchase
This movie is a clear exposé of human sexual nature. Here we have the old lady married with a lover on the side, just keeping the typical monogamous marriage institution alive, on one side the moral lady and inside the natural woman.

We have the typical American girl Vicky that is engaged and want to fulfill her American Upper Class societal role that succumbs to nature. You have the typical free and carefree societal American Butterfly, Cristina) that is experimenting life and has no moral issues whatsoever. On the European side we have Javier Barden the typical Dalí reincarnated and Penelope Cruz, a neurotic extremely explosive Spanish Artist. That as a matter of fact acts more as the typical Latina or Spanish wife than a exwife.

In here you see a rare thing, the effects of power transfer and power stacking that happens is a Ménage a Trois. You se the forbidden fruit of a open poly relation that only lasted a moon cycle.

The movie explores the hypocrisy of our social arrangements and the cost of marrying the wrong person! Maybe happiness lies in the freedom to be able to have whatever you might want.

christineReviewed in the United States on March 22, 2015
4.0 out of 5 stars
An American "foreign" film
Verified purchase
"An American foreign" film capturing, not a story line over time, but temporal romances, sexual habits of people built over a lifetime, acted out neurotically. This film reminds me of the Pices twin fishes. One blond, one brunette, the other brunetter is the mirror image of the first brunette who cannot do as she wishes sexually, so the 2nd brunette "The bat-shit crazy chick,the stick of dynamite that explodes with sexual intensity" fills in for her. The Pices fish swim counterintuitively, intuitively, either leaving a relationship, or staying in one they want to leave but, conflicted, don't. This isn't a story, or is the oldest story. Acted idiosyncratically, this film captures the very essence of human sexual confusion, restiveness, monogamy in the style of the French foreign films. I always knew Woody Allen's mind worked in a foreign manner, and this film cracks Allen's skull open again to reveal another twisted,section of his cortex, the gray areas of human morality, sexuality, joy and misery. Not a spectacular achievement, but Allen's writing, acting and directing set the bar so very high and he's bound to miss a leap every so often. This film is worth seeing, just don't expect a brilliant film. Expect to see yourself, your spouse, your parents, your teenagers crisscrossing the territory of desire and ambivalence.
15 people found this helpful

johnbp123Reviewed in the United States on February 28, 2017
5.0 out of 5 stars
Sexy movie but, guys, don't let it convince you that YOU are artist...
Verified purchase
Sexy love story of a horny Spanish artist who gets his way with 3 beautiful women. Ménage à trois-yes. Penélope Cruz and Scarlett Johansson kissing scene-yes. Art, sex, romance-it's all here. Owned this movie for years, convinced my wife I was a sexy artist and needed a three-way. She consented a few times but eventually divorced me and now I'm with the other woman. Damn movie helped break up my marriage but I still bought a digital copy after wearing out the DVD. No more 3 ways though, and I miss my wife.
23 people found this helpful

MLYReviewed in the United States on June 22, 2021
1.0 out of 5 stars
Cartoonish Nonsense
Verified purchase
Cartoonish Nonsense. It doesn't add to life. The characters are neurotic, self-serving, and extremely immature. They just swing around from vine to vine without any concern for the damage they cause others.
2 people found this helpful

otowngrl2012Reviewed in the United States on April 4, 2015
4.0 out of 5 stars
A smart film about relationships and choices
Verified purchase
I'm a huge Woody Allen fan, and I agree that this film isn't his finest. That being said, I think it's a good film--with great acting--that explores the paradox of love. On the one hand, one can have a stable and enduring, yet ultimately dispassionate, relationship. On the other, one can seek out passionate and volatile relationships that can only last so long. While the two main characters, Vicky and Cristina, illustrate this disparity (Vicky choosing the stable and enduring relationship in lieu of her heart's passion, and Cristina choosing tempestuous relationships that end as quickly as they began), the suave artist Juan Antonio and his ex-wife illustrate a possible--if not fleeting--balance between these two disparate states. With the aid of Cristina, the couple rekindles their passionate relationship, bolstered by stability, through a threesome of minds and bodies. Yet even when this balance is seemingly achieved, the perfect harmony is only transitory.

The theme of this film reminds me of the Beach in some respects. Both films explore the desire for perfection, as well as its ultimate elusiveness. Even when the perfect state is seemingly achieved, it can only be maintained for a brief moment. If you like Woody Allen films, you may also like this. But if you liked the Beach, you may love this movie.
3 people found this helpful

SFO BroReviewed in the United States on March 18, 2013
4.0 out of 5 stars
Woody Allen?
Verified purchase
Not like I remember. I thoroughly enjoyed this movie. If you're a fan of Scarlett, you'll love this flick.
People poo poo it for some of the dialogue and perhaps delivery thereof, but then they'll say that the
scenery and shooting is what one would expect. That type of positive comment balances out the stuff
that they have to make up that's "bad" about the movie. I don't quite get her affinity towards Woody Allen,
but that's just fine. In this movie, she's the character that I think we all love her as. The supporting cast
is extremely able and Penelope's character is scary and intense. As the story really sets, the relationship
between these 4 is really unusual, but extremely Barcelona-esque? It's a love story, and kind of a chick flick
but there's no sense in missing out on the scenery, either of surrounding landscape or the women themselves.
I don't know what keeps me from giving it 5 stars, but for the fact that it would become a Top 10 quality of movie
for me, and certainly there are very few that can do that. I'll go with 4.85/5. If for nothing else than
Scarlett's presence in the movie. : )
5 people found this helpful

Stephen P. SuelzleReviewed in the United States on March 30, 2015
4.0 out of 5 stars
Woody Wes Thoughtful
Verified purchase
I really just wanted to add my rating to the mix. Everyone pretty much has decided if they like this movie or not. I did quite a bit. It was like Woody Allen had lunch with Wes Anderson to discuss a movie and this was the result. Those are two of my favorite directors. I especially identified with the idea that relationships can include whatever situation the people involved desire and not just romantic relationships either. Friendships too.

And then there is Penelope Cruz. Such a forceful actress in anything I have seen her in. She is also one of the few that makes you feel like you could actually fall in love with her.

I also wanted to mention that this would make a great double feature with "[[ASIN:B00JLDT9OA Fading Gigolo [Blu-ray]]]". Not a Woody Allen movie but certainly in his spirit.
4 people found this helpful

HikariReviewed in the United States on September 7, 2009
3.0 out of 5 stars
Managing the Menage and Oher European Sports
Verified purchase
3.5 stars. Javier Bardem won an Oscar for playing an essentially sexless, emotionless murderer with a supremely dorky haircut. Here he displays his Continental sex god charm to full effect as a bohemian painter who romances not one, but three separate women over the course of a summer in Barcelona. Mr. Bardem espressed wonderment in a magazine interview that he got paid to make love to three gorgeous women in the same movie. Why not, say I? This Spaniard is sexy as all get out. Woody Allen's muse du jour, Scarlett Johansson can't even compete on the sexy scale with Bardem, though she tries a lot harder. As if we needed further evidence that Woody Allen is a lecherous old man, here it is! Though it is contrived and self-conscious in the manner of all Allen films (was a Narrator really necessary? I say not), I ended up liking this anyway. Penelope Cruz channels Frida Kahlo to chew the scenery and what scenery it is. You will want to do two things immediately after watching this movie: book your ticket to Barcelona and run, don't walk, to the store to get a copy of the dance-tastic Latin soundtrack. A project that ends up being less than the sum of its parts, but the individual parts make it pretty good.
One person found this helpful
See all reviews
Back to top
Get to Know Us
Make Money with Us
Amazon Payment Products
Let Us Help You
EnglishChoose a language for shopping. United StatesChoose a country/region for shopping.
© 1996-2022, Amazon.com, Inc. or its affiliates