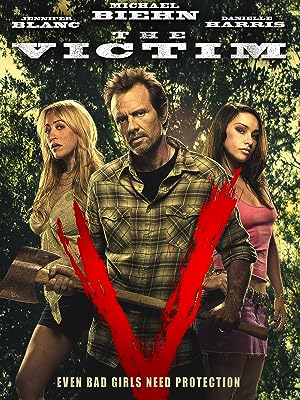 (164)4.31 h 22 min2012R
After witnessing the horrific rape and murder of her closest friend, a young woman stumbles across Kyle (Michael Biehn of THE TERMINATOR), a recluse living in the middle of the woods.

MiloReviewed in the United States on June 19, 2021
2.0 out of 5 stars
Michael Biehn and Jennifer Blanc-Biehn were great but the film was terrible
Verified purchase
Director, Writer and Star Michael Biehn is a great actor but The Victim (2011) as a film is terrible, which could be attributed to the supporting cast. Jennifer Blanc-Biehn as Annie gave a fine performance but everyone else came off flat on camera.

Horror movie holicReviewed in the United States on October 6, 2012
2.0 out of 5 stars
Unwatchable
Verified purchase
Really, Michael Biehn? No, no - Seriously? You owe me $2. I'll take a check. You were in Terminator for God sakes. I get you have a mortgage payment too, but this is record-settingly bad.

Sadly, it had potential. I give it 2 stars for the plot overall and the fact that done with better acting and writing, could have been a great True Romance-esque film. It missed the mark by about 5 miles. The only thing that sucked more was the leading lady - literally and figuratively.

I'm guessing he wrote, directed, produced and starred in this (as most of the cast also had about 5 jobs per) due to the fact no studio would have green-lighted this. And look at what crap they will go through with. This was so bad, they probably wanted no part of it.

The writing is awful, the acting is minging (save for a few parts for Michael Biehn - the only "real" actor in the movie). The most amusement for me was the impromptu riff-tracking with my husband. I think the movie is a definite MST3K prime candidate.

The leading lady is probably the worst actor I've ever seen in any movie. Ever. Period. Stick to make-up artist, Girl. I do not know for certain by any means, this is simply personal theory, but I got the feeling that some people in the movie may actually have been in some porn at some point. But it might be that the movie is about on par with what little porn I've seen. A lot of unnecessary sex with very strange timing. SPOILER ALERT- when the woman in the film is out looking for her dead friend's body to prove to Biehn that she's telling the truth, she suddenly goes into "How old are you?" "You're pretty sexy for 54. I've always had a thing for older men" And que unnecessarily gratuitous snogging in 3, 2... Seriously!? She's looking for her dead best friend's body!!! The one she saw murdered less than a few hours ago. And she's turned on by this how?! She later goes on to give a BJ in an effort to buy time before a man is planning to shoot her citing "At least I'll get to do something I love doing". (And considering Biehn's age is mentioned by another reviewer not unlike it is in the movie- I'm guessing the author of that review is the same woman). This is clearly a case of the people involved in the movie writing their own reviews. The ladies of the movie definitely strike me as a little porn-actress, but again, personal thought, by no means backed up by any fact checking. I really wasn't sure what they were going for - thriller or late night Skin-a-max movie.

PrestonReviewed in the United States on May 28, 2019
4.0 out of 5 stars
Funny
Verified purchase
I have a feeling most people won't like the movie but Ioved it. I grew up watching B-movies and felt this was a nice addition to the ranks of B-movies. I hope for more like it to be added to Amazon.
2 people found this helpful

musicfanReviewed in the United States on May 5, 2019
2.0 out of 5 stars
This Movie was Awesome!
Verified purchase
Kidding.This movie looked like it was shot over the weekend. I gave it two stars because I laughed at the line "You are in this NECK DEEP AND YOU KNOW IT!"
2 people found this helpful

Christopher ClarkReviewed in the United States on July 7, 2020
5.0 out of 5 stars
Danielle
Verified purchase
I loved this movie. Especially because of Danielle Harris.

David W. BarsnessReviewed in the United States on November 15, 2013
3.0 out of 5 stars
Cool Flick
Verified purchase
I actually thought that this was a nice little effort by Michael Biehn & company at film making. I really enjoyed the credits at the end. Obviously this is not a great movie but ya know what, it was watchable & I enjoyed it. I kinda figured out the ending about half way through but that did not make me enjoy the movie any less.
2 people found this helpful

susan balukonisReviewed in the United States on July 20, 2018
1.0 out of 5 stars
One Star
Verified purchase
waste of money
2 people found this helpful
See all reviews
Back to top
Get to Know Us
Make Money with Us
Amazon Payment Products
Let Us Help You
EnglishChoose a language for shopping. United StatesChoose a country/region for shopping.
© 1996-2021, Amazon.com, Inc. or its affiliates