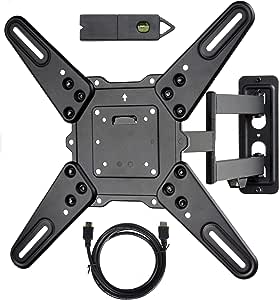 Add to Cart
$33.53
& FREE Shipping on eligible orders. Details
Sold by: Amazon.com
Have one to sell?
Sell on Amazon

by VideoSecu
4.6 out of 5 stars 40,126 ratings
| 1000+ answered questions
Amazon's Choice recommends highly rated and well-priced products.
Amazon's Choice for "vizio wall mount"
Available at a lower price from other sellers that may not offer free Prime shipping.

Buy this product as Renewed and save $1.25 off the current New price.

ML531BE2 is a low-profile full motion wall mount, It extends up to 20 inches off the wall, gives you maximum flexibility in positioning your TV to fit your environment for comfortable view. This heavy duty steel mount supports most TVs weighing up to 88 lbs. It fits most 26"–55" flat panel TV and new LED TVs up to 60”. The mount can swivels in either direction, tilts up 5 degree, tilts down 15 degree, and has ±5 degree screen level adjustment capability.

4.6 out of 5 stars
4.6 out of 5
40,126 customer ratings
How does Amazon calculate star ratings?
Amazon calculates a product’s star ratings based on a machine learned model instead of a raw data average. The model takes into account factors including the age of a rating, whether the ratings are from verified purchasers, and factors that establish reviewer trustworthiness.

in November 2016 I ordered this product for my LG SJ800 65"tv. It promised a 24 inch extension and that's exactly what I needed. The product I ordered in 2016 has been oustanding and I utilize the extension all the time.

I was in need of this product once more this year as I reordered the same tv for another area of my home.

Imagine my surprise when in December 2017 I click "buy again" on this product from my prior orders and I receive a tv mount that is smaller, does not have a quick ajdustment bar for angle change, does not fully articulate left and right without shortening the extension, and (the worst part) the extension is only 16 inches. This effectively made the product useless to me as I was attempting to mount the exact same 65"tv I had installed last year in a corner position.

It is important to note the 16" extension is listed in the product details as of December 21, 2017, but trusting this company's product retained it's high standards from November 2016 failed me. They changed the product they were selling, retained the high reviews, amd altered the product for the worse.

Changing the quality and specifications of your product in such a way loses you repeat customers. I'll be completing the return process today and our new tv will not be mounted for our Christmas party.

Sir Ace
1.0 out of 5 stars CHEAP BOLTS! ACCIDENT WAITING TO HAPPEN!
Reviewed in the United States on May 24, 2018
Size: 37-75" TV 16" studVerified Purchase
Absolute garbage quality! Shady at best. Most of these positive reviews are for a different mode mount.

This one comes with cheap bolts that snapped off while tightening even before the bold was even making contact with the mount. This is a HUGE safety hazard!!

I predrilled the pilot holes as instructed, then used a wrench to screw the bolt in. It still snapped!

This is a massive accident waiting to happen. Look up bolt grade guide, these are ungraded and cheapest quality.

Derek Tombrello
5.0 out of 5 stars Drill 3/16" Pilot Hole, Not 7/32" - Otherwise Easy to Install and STRONG!
Reviewed in the United States on June 9, 2016
Size: 27-55" TV single studVerified Purchase
I used to install TVs for people professionally, so I have used many different mounting systems. I was looking for something cheap, but reliable to hang a 50" LG 50LA6200 LCD TV. I looked at a lot of options both on Amazon as well as elsewhere before settling in this one. I am happy that I did!

For starters, this comes with EVERYTHING that you could possible need to hang your TV, with the exception of a #2 phillips head screwdriver and a drill. Included are a complete assortment of screws, bolts and washers (all neatly organized and labeled in individual packets), a double-sided spanner wrench, a very nice magnetic level, and even a 10' HDMI cable. The instructions say to use the "optional" expansion kit for larger TVs. Usually, this is code for "kit not included." I was pleasantly surprised to find that that was not the case here. For once, the "optional" kit was actually included!

Installation was a breeze for me, even without instructions since I already know how this works, but I found the instructions relatively easy to follow for those who need them. All of the various configurations for the expansion arms can get confusing, but just try each one until you find the right setup for your TV.

** PLEASE NOTE **
There is one change to the instructions that I highly suggest, however. The instructions say to drill a 7/32" pilot hole into the stud for each mounting bolt. Then screw the bolt in with a phillips head screwdriver. When I first mounted this (I wound up moving it shortly thereafter), I followed the suggestions for the pilot hole. Sure enough the screw did thread in easily... a little TOO easily. The second hole from the top actually stripped out and I was not putting much force behind the screwdriver at all! When I moved this to the other side of the room, I decided to go with a smaller pilot bit. I used a 3/16" bit instead. Granted, you are not going to thread the bolt in with a screwdriver - you will need a 10mm socket - but doing it this way, those bolts are not going anywhere! You could probably get away with a 13/64" bit, but to really protect your expensive TV, I would want all of the bite I could get!

I also found that the inside diameter of one of the washers was a smidge too small for the bolt to go through. I just enlarged it with a round needle file, but since they don't include any spares, if you don't have a file or another washer laying around, you'll need to get one. Just thought I'd throw that out there in the interest of full disclosure.

Once this was installed, I was impressed with not only the sturdiness, but also with the complete range of motion. This is fully articulated. You can put your TV pretty much anywhere you want to. The only thing it can't do is move your TV up or down, although you can tilt it to a certain degree.
Read more
1,389 people found this helpful
Helpful
Comment Report abuse

Cody Coyne
5.0 out of 5 stars This TV mount is beyond my expectations. Very well built.
Reviewed in the United States on March 14, 2016
Size: 27-55" TV single studVerified Purchase
So I was very skeptical of this product when I first looked at it, lots of people saying it would tear out of the wall shortly after installation and all that. Lemme tell you, they just did it wrong or like complete idiots; you do no use dry-wall mounts for a heavy TV, possibly a lighter TV, and I can not stress the word "Light" enough. No one should be using dry-wall mounts in the first place, they are not reliable... plain and simple.

Anyways, back to my experience with the product. I have it mounted above my Xbox One about 4 feet off the ground. I mounted to a stud in the wall and right after that, my roommate who weighs around 150 LBS hung off of it for about 5 seconds at the base and it didn't even budge; now that's a tough wall mount if I ever saw one! I put my 40" Samsung TV on the mount, and I can extend/swivel/angle/tilt it however I want.

The gear it comes with is pretty high quality and especially the level. For an add on to the product the level is pretty decent for it's designed purpose. The packaging is well done and the parts are all labeled well and accordingly. Make sure you use washers on the outside of the mount before you put the TV adapter on your TV, they will save you a lot of grief.

I've had this wall mount for a month so I felt pretty confident in writing a review. I'll add some pictures to let you know the range of motion as well as how the TV looks how I attached the adapter and the part where it's mounted to the wall. I can sit specifically off to the side and enjoy the TV along, I can turn it to look at my PC area so I can play while I talk to friends on Skype or other chat programs and I can turn it to look at my bed and I can enjoy Neflix or Hulu as I lay in bed, nice and cozy.

I hope you all enjoyed my review, it's been a blast and I'll be willing to answer any questions you might have.
Read more

Kyler David Juhasz
1.0 out of 5 stars No hardware included.
Reviewed in Canada on March 18, 2020
Size: 27-55" TV single studVerified Purchase
Didn’t come with any hardware at all. Seen a lot of people complaining about the quality of their hardware but not anything about not receiving it in general. Product is good otherwise but yeah really a sharp jab with the hardware issue. In the long haul I ended up getting better hardware anyways so it worked out haha
Read more
Helpful
Sending feedback...
Thank you for your feedback.
Sorry, we failed to record your vote. Please try again
Report abuse

Page 1 of 1 Start overPage 1 of 1
This shopping feature will continue to load items when the Enter key is pressed. In order to navigate out of this carousel please use your heading shortcut key to navigate to the next or previous heading.
Back
Next
Pages with related products. See and discover other items: 300mm x 300mm mount, 50-inch tv stand black, samsung flat panel stand, samsung flat screen tv accessories, slim wire tv mount, 200 x 200 vesa mount