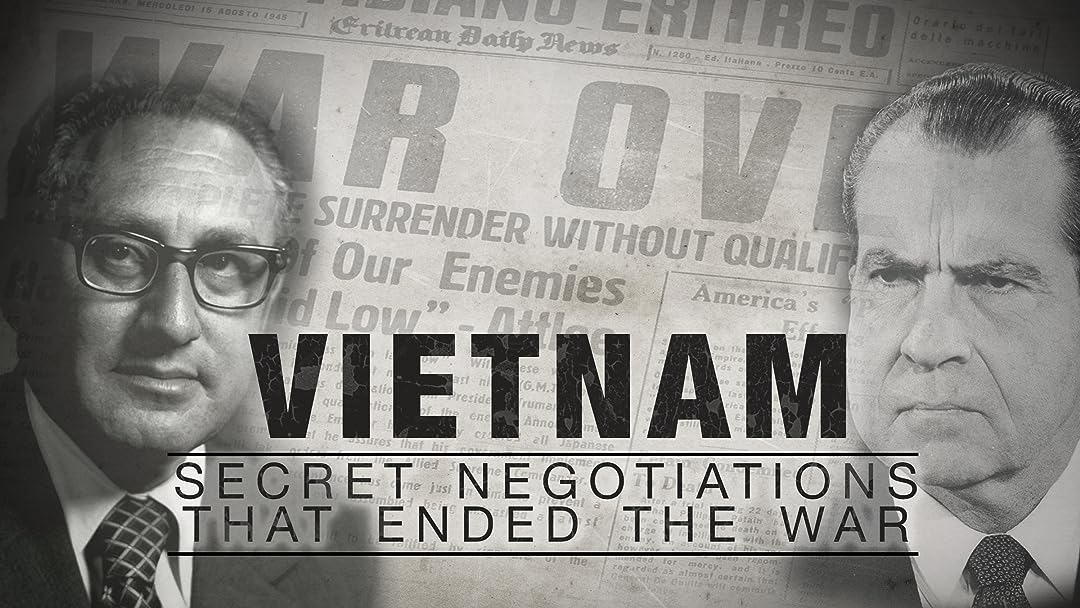 (97)
53min2015PG-13
While the war raged on, Henry Kissinger, national security advisor to President Nixon, and Lê Duc Tho, member of Vietnam's Politburo, held secret meetings in France. This award-winning film features exclusive interviews and undisclosed recordings of what happened between two men who were worlds apart. How do historians explain the massive air offensive that followed weeks after peace was signed?

kris littledaleReviewed in the United States on April 3, 2017
3.0 out of 5 stars
Didn't learn much but interesting none the less.
Verified purchase
Anybody that does a "documentary" about the Vietnam war has their own point of view. Their own axe to grind. This one is no different. Having grown up in that era and missed the draft by a few short months I naturally have my own point of view. The US lost the war. That is undeniable. Our short-term goals for the war (an independent South Vietnam) were not met. Saigon did fall. But Vietnam was a microcosm of the Cold War and the "Domino Theory". It can be reasonably argued that North Vietnam (with Soviet encouragement) had designs to make all of SE Asia including Thailand fall under Communist hegemony and that they failed because by the time they took Saigon the war had bled them just about to death. So perhaps the US did achieve their long-term goal of thwarting Communist hegemony over SE Asia. I don't know for sure one way or the other. What I do know FOR DAMNED CERTAIN is that the our armed forces did not lose the war on the ground. The war was lost because the people at home (with the help of the leftist media) lost the will to continue the war. Had either LBJ or Nixon ever told the military..."You have 500,000 men over there and you have 3 years to win the war and you may use any means you choose short of nuclear weapons" then what was then North Vietnam would now be a province of South Vietnam. The US Military has never lost a war. But the politicians and American people sometimes lose their balls and just plain run away from a war.
6 people found this helpful

RMReviewed in the United States on June 13, 2020
1.0 out of 5 stars
Slow and typical sophist history
Verified purchase
Very slow and boring both in pace and hackneyed content.
Richard Nixon brought more peace to the world than any other President. Twenty years earlier the U.S. was engaged in a hot war with China in Korea. Ten years earlier the super powers nearly engaged in a nuclear war while China was engaged in their fanatical Cultural Revolution and then the Vietnam War raged. Nixon concluded all of that with negotiation resulting in good terms for the United States.

It is highlighted that Nixon said "The press is the enemy" and "the professors are the enemy" which history has confirmed was absolutely true and they both thought the same of Nixon.
What is omitted is that these cheerful and aged Communists of North Vietnam also thought their press and academia were the enemy and they were crushed unlike in the United States where they thrived.

The war ended in 1975 with the North Vietnamese ignoring the treaty and the Democratic Party congress ignoring the fact that they started the war in 1964 and now voted to lose the war. Soon any interest in the plight of the people of South East Asia evaporated despite the Cambodian Genocide which resulted from the loss of the war.

The Team America like puppet show during the end credits are a nice touch in showing the caricature of history we are given far too often which misleads those ignorant of the history.

avid gardenerReviewed in the United States on August 17, 2016
5.0 out of 5 stars
Stabbed in the back
Verified purchase
As a former Marine VietNam veteran and an avid student of history, and having grown up in that turbulent time, I realize the validity of the statement, "Rich Man's War, Poor Man's Fight." Kissinger along with McNamara, and Maxwell Taylor betrayed all of us who fought and died. The documentary was compelling, and I recommend. Many more things go around in the dark besides Santa Claus.
10 people found this helpful

David CederstromReviewed in the United States on November 7, 2018
2.0 out of 5 stars
Anti-American and pro-communist hit piece
Verified purchase
This documentary spends its entire length criticizing America and her troops and praises the communist forces and communist leaders as heroes. Its not worth your time unless you subscribe to anti-American marxist ideology, which sadly, many do these days.
7 people found this helpful

Amazon buyerReviewed in the United States on September 20, 2016
2.0 out of 5 stars
Yet another French, Anti-American, one-sided narrative.
Verified purchase
This is one of many typical French, one-sided, anti-American propaganda films full of half-truths, purposely-omitted key information, and deceptively orchestrated narratives about the Vietnam War. The only redeeming value is the understanding that negotiations took place and who the major players were in these negotiations along with some interesting film showing the locations of these secret meetings. Statements such as "America claimed to be the World's Sheriff", that "America was the aggressor and North Vietnam the victim", and that after the Paris Peace Accords, "the war happened to start again" are just a few examples of the one-sided narrative. Also, a chronicling of American attacks but zero mention of any North Vietnamese aggression or war crimes are noted as to the film-makers goal of yet another Anti-American propaganda film.
5 people found this helpful

D. MahonyReviewed in the United States on August 1, 2016
4.0 out of 5 stars
The Negotiations Were Taped!
Verified purchase
I was intrigued by the title and have always wanted to know more about these negotiations. The movie started by saying that all of the negotiations were audio taped, which I wasn't aware of. In spite of this, the movie didn't seem to offer any new information about these negotiations. I would have liked to hear more of the taped conversations. Maybe they weren't that interesting, but I would have liked to hear them anyway. These negotiations were key to the U.S. bowing out of the disasterous war with Vietnam. Although I've learned that we don't learn the lessons of history, I would think that these negotiations are essesntial in order to get an understanding of the party's positions and the concessions that were made to make peace possible.

There was one disturbing part where Kissenger was making jokes by wishing Lê Đức Thọ a "Merry Christmas." Of course, Lê Đức Thọ didn't celebrate Christmas (that was the joke). I found this joke disturbing since the U.S. bombed Vietnam heavily that Christmas and of course, that led to lots of death and destruction. I'm not sure if this is the attitude one must take in these types of negotiations but it seemed a bit callous.
8 people found this helpful

Tom from Santa MonicaReviewed in the United States on September 26, 2016
4.0 out of 5 stars
So much to learn about negotiating when you only have a pair of duces.
Verified purchase
Very interesting, but these negotiations were such a waste of time. The North Vietnamese never intended to abide by anything they agreed to as long as the American maintained their flawed running of the war. The Americans needed Douglas MacAruthur and an invasion of the North to win. I was one of the young American Infantrymen, put into jeopardy and watching up to 600 of my friends dying every week.
See all reviews
Back to top
Get to Know Us
Make Money with Us
Amazon Payment Products
Let Us Help You
EnglishChoose a language for shopping. United StatesChoose a country/region for shopping.
© 1996-2022, Amazon.com, Inc. or its affiliates