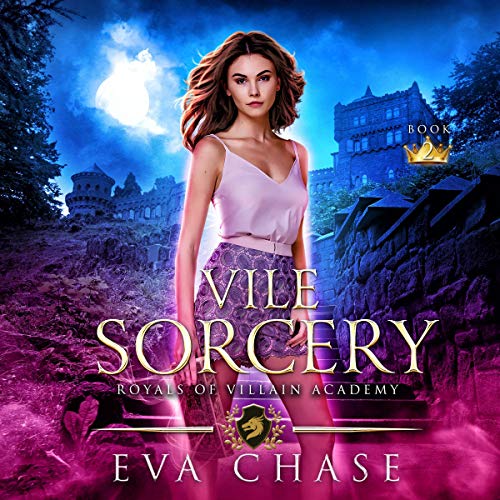 In a month, I've gone from magicless to one of the most powerful dark mages in the world. You'd think that would make my life easier.

But all that power is only potential until I learn how to wield it, and my enemies have a huge head start. While I'm picking up every skill I can, adversaries both within Villain Academy and beyond it are working to knock me down.

My fellow scions? I can count at least a couple of them among those enemies. The others...let's just say the lines between light and dark have gotten a lot more blurred.

Nothing's safe here - not my mind, my heart, my magic, or the few people who're proving themselves my allies. When the danger turns deadly, will I be able to save all of them and myself?

*Vile Sorcery is the second book in a university-age paranormal academy series. Expect magical villainy, a tough heroine who bends to no one’s will, a dollop of steam, and a slow-burn enemies-to-lovers reverse harem romance where there'll be no choosing required.*

Special invitation from Audible!
Learn more about Membership
List Price: $19.95
You Save: $2.49 (12%)
By completing your purchase, you agree to Audible’s Conditions Of Use
Sold and delivered by Audible, an Amazon company

Emily
5.0 out of 5 stars LOVE LOVE LOVE!!!
Reviewed in the United States on September 4, 2021
Verified Purchase
After passing her test, Rory has locked in her stay at the academy. Can Rory keep up and stay strong against those who want to see her crumble?

Eva has done it again!!! This is the second book in the Royals of Villain Academy series. I immediately followed over from the first one and I could not put it down. This book gave me everything and more. The slow steady burn keeps me wanting more. The banter back and forth that just has me smiling up a storm. The strength and power that keep me internally screaming “GO RORY, DON’T GIVE UP”.

Rory is still one of my favorite characters. She is still given the third-degree burn from the other scions. She doesn’t give up. Even when she’s showed that she’s tired, she won’t back down or grovel. I love it so much!!!

The run-around I had with all the guys, slowly killed me. Connar breaking my heart since the last one, but slowly putting it back together by the end of this one. Jude making me fall so hard and in love with him, only to stab me and Rory in the back. Declan fighting himself about what to do, but finally admitting to some of his feelings. Malcolm is still being Malcolm though. I hope he’s the one groveling soon.

I am immediately going to the next one. I cannot wait to see how everything plays out. I can’t express enough how much I thoroughly enjoy this series and you just have to go read it. If you like magic, if you like a slow burn, if you like enemies to lovers, and if you like reverse harem relationships GO PICK UP THIS BOOK RIGHT NOW!!
Read more
One person found this helpful
Helpful
Report abuse

Kerasia
5.0 out of 5 stars Fantastic
Reviewed in the United States on June 6, 2019
Verified Purchase
I read this in one evening and I do not really know how I am going to be able to wait until august for the next one. I love this, the way Rory interact with the others at school, her conviction and strength, the story is truly amazing. The best part is the continuous rewealing of the reasons behind her schoolmates actions. As for the scions, none was that likable in the beginning, but things are slowly changing . As the story goes on you realise the reasons behind their actions and understand the characters in a different way.
Read more
6 people found this helpful
Helpful
Report abuse

Nichole
5.0 out of 5 stars Notes from a Silent Reader: I LOVE THIS SERIES!
Reviewed in the United States on June 21, 2019
Verified Purchase
I’m not good at writing reviews but when I really feel passionate about a book or a story I just HAVE to show how much I love it vocally. This series dabbles with so many cliches but at the same time turns them on it’s head! The originality and pacing of this series amazes me. The dialogue is so realistic! And the characters are even better! Thank you so much for writing a story that is ONE IN A MILLION! I can’t wait to read the next one.

SPOILER NOTE:
Can I mention the progression of Malcolm’s growing obsession in taking down Rory? That last scene with Malcolm and Connar- the two of them in the hideout with the rest of scions out of the picture... it was powerful to see both characters’ development in character. Especially Malcolm, who initially took on the role as the cool antagonist, head on his shoulders, we could see him start to lose his grip. It’s about time that he relents.

ANOTHER SPOILER NOTE:
I hope we can see all five scions UNITE against a common enemy soon, whether it be the barons or the joymancers.
Read more
6 people found this helpful
Helpful
Report abuse

Kdb
VINE VOICE
5.0 out of 5 stars Broken love
Reviewed in the United States on September 16, 2019
Verified Purchase
Rory is still trying to navigate Villain Academy fight her attraction to the one man she truly wants but is her trust misplaced. Her Advisor is becoming critically more ill death could be coming to claim him soon can Rory help or will she make things worse. Her relationship with Jude becomes more serious but will there difference just tear them apart and Malcolm's control of his friends may be loosening. Will Rory's dreams break her or will she find the person behind them first.
Read more
2 people found this helpful
Helpful
Report abuse

Amber N Kinsey
5.0 out of 5 stars Great Second Installment in Series
Reviewed in the United States on March 26, 2020
Verified Purchase
Great read - Rory remains strong as ever in her non-stop changing relationships with the other scions. Malcolm seems to be losing control as his machinations fail to break Rory. And the arc with Rory's mentor's illness ends in a surprising fashion. All in all, a great second installment in the series.
Read more
One person found this helpful
Helpful
Report abuse

Sarah Murphy
5.0 out of 5 stars Keep it coming!
Reviewed in the United States on June 6, 2019
Verified Purchase
I was super excited for this release, and wasn’t let down at all. I love how strong Rory is, and how firmly she sticks to her convictions. It’s very interesting seeing how she interacts with the other scions, be it good or bad. August seems like such a long ways away for book 3...
Read more
2 people found this helpful
Helpful
Report abuse

Jessica Robbins
4.0 out of 5 stars Great Development
Reviewed in the United States on July 13, 2019
Verified Purchase
Intriguing addition to this series that sees Rory fighting hard while the guys are still less then pleasant. Though a couple are starting to come around giving me hope but Malcolm needs what's coming to him. Lots of secrets along with the tricks makes for a great read. I really liked it so I give it 4/5 stars.
Read more
Helpful
Report abuse

Rhaysha
5.0 out of 5 stars Holy cow!
Reviewed in the United States on June 6, 2019
Verified Purchase
I thought the first book was awesome. The relationships in this twist and turn. He's good, he's not, but maybe, oh he's hot! Lol. Get your hands on this series!
Read more
2 people found this helpful
Helpful
Report abuse
See all reviews

Mandy
5.0 out of 5 stars SO Good
Reviewed in the United Kingdom on May 4, 2022
Verified Purchase
This book uped the ante so much, with even more Malcolm drama, more evil schemes and so many more man problems. Rory is fighting for her life with everything she has.

I am loving this series so much and with that tragic ending i am more than ready to dive into the next book to see what VIllian Academy and the Fearmancers throw at Rory next.
Read more
Report abuse

Maxine M
5.0 out of 5 stars ⭐️⭐️⭐️⭐️⭐️
Reviewed in the United Kingdom on March 17, 2022
Verified Purchase
Love everything Eva writes. I can't get enough of this author. Iv reread this series so many times and ill probably continue to read it over and over again. Great series with fantastic characters.
Read more
Report abuse

Amy91z
1.0 out of 5 stars Rubbish
Reviewed in the United Kingdom on June 9, 2019
Verified Purchase
It goes from bad to worse it not got an funny or happy bits it goes from more depressing to absolutely rubbish it’s just too dark with no story worth reading
Read more
Report abuse