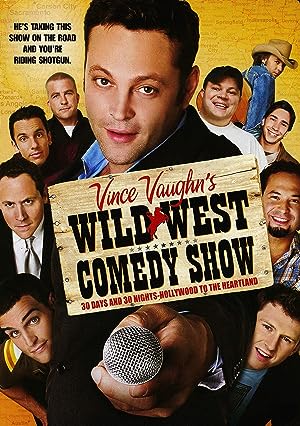 (147)
6.21 h 40 min2007R
Through on-stage performances and behind-the-scenes interviews, the documentary breaks down each comedian's life-altering experiences and personal and professional challenges.

PMOhioReviewed in the United States on February 21, 2015
5.0 out of 5 stars
Worth it for the DVD extra content; but don't expect a DVD with couple hours of only stand-up
Verified purchase
I generally like Vince Vaughn's movies and, after seeing the Wild West Dinner for Five episode, I decided to give this DVD a try. It was definitely worth the few bucks.

As a general rule, I don't really get the appeal of stand-up. However, this documentary isn't really about stand-up, per se, but more about the experience of/story behind being a comic--the personal and cathartic aspect of their material, the development of them as people/comics, their vulnerability, etc. I like it for the reflective, human component. I suspect that if you are someone who enjoys stand-up and watch this looking purely for stand-up, you might be disappointed.

There are plenty of clips of the comics' stand-up throughout, as well as extra content for each comic. In addition, the show involved some others bits, including some with other actors Vaughn has worked with, sort of re-creating funny scenes or playing off those scenes (Peter Billingsley, Keir O'Donnell, Justin Long, Jon Favreau, Dwight Yoakam).

Even if you've seen the movie, the DVD is worth buying just for the extra content. There are behind-the-scenes and making of- kinds of and other kinds of things and two commentaries. And not to take anything away from the Vaughn/Billingsley commentary, but the comics'/director commentary is quite funny!

Some other humorous things that make it worth a watch:
- The male-bonding/bff-ness of all of them, but especially evident between Vince Vaughn, Peter Billingsley & Ahmed Ahmed. Content on the DVD explains they have been friends since the late '80s.
- Justin Long getting cussed out by a sleep-deprived and half-asleep Peter Billingsley for stealing his pillow (who then apologizes once he's actually awake, and after Justin has cowered away into a bunk).
- The audience "fangirling" over Vince Vaughn (in particular) but also over the comics after the shows. It's quite humorous to watch because they look a bit pathetic at times.
- Vince Vaughn's singing and the fact that he can't seem to get the words right for Sweet Caroline or Streets of Bakersfield. :)

Josh MReviewed in the United States on August 27, 2021
4.0 out of 5 stars
This copy I received is from Canada, but
Verified purchase
otherwise, this is a fine documentary. Zips you straight back to 2005, which was fun but sad too (Hurricane Katrina). Good stand up bits, insight into comedians' histories and life on the road.
One person found this helpful

Thomas PadgettReviewed in the United States on April 8, 2015
5.0 out of 5 stars
Even the pros have emotions
Verified purchase
This video took me behind the scene, and made me appreciate what professional stand-up comedians go through. As someone who has been on stage, I know the apprehension, the self-doubt, and the self-criticism that goes with the territory. I always felt that at the highest levels, the pros were immune to that...and this video convinced me that I was wrong. It's worth it just to see the emotions of these talented artists, both before and after their performances. And, as an added bonus, the performances were HILARIOUS!
One person found this helpful

James R. PetersReviewed in the United States on October 11, 2013
5.0 out of 5 stars
Hilarious and Heart Warming Too!
Verified purchase
I have to admit, as a huge Vince Vaughn fan, I am a tad biased. I laughed throughout this entire special and really was touched at the end. It was an amazing journey, with the curtain pulled back allowing great insight into the thinking of the comics. What a great ride, 30 cities in 30 days! It was a pleasure to see their comedy, but also meet their families and learn about their comedic journey. A must see for true fans of stand up comedy.
2 people found this helpful

Michael MarquezReviewed in the United States on October 31, 2013
5.0 out of 5 stars
Hilarious Documentary!
Verified purchase
Given the title, you would think this movie is a comedy special. However, it is documentary about the roadshow and it's stars. It does have some amazing moments of stand up and sketches which makes the movie totally worth watching. You will finish the film with some insight into the tour, but more importantly with a decent sampling of stand up from some amazingly talented comedians. I definitely go out and support Sebastian Maniscalo, Bret Ernst, and John Caparulo when the visit the local comedy venues.
2 people found this helpful

S. ReddingReviewed in the United States on January 29, 2013
5.0 out of 5 stars
Great mix of comics and behind the scenes footage!
Verified purchase
I rented this video as I am a huge Sebastian Maniscalco fan. It was filmed as a sort of behind the scenes movie combined with comedy show footage. It gave me a great respect for what a comedian does night after night. Plus it was good to see a few other actors who were also helping these comedians get their start. I found it very entertaining! A must see for any comedy fan!
One person found this helpful

Brittney C LongReviewed in the United States on January 15, 2021
4.0 out of 5 stars
A wonderful documentary.
Verified purchase
At first I expected it to be a comedy special having not read the description. That being said, it was a hilarious documentary and well worth the watch.
See all reviews
Back to top
Get to Know Us
Make Money with Us
Amazon Payment Products
Let Us Help You
EnglishChoose a language for shopping. United StatesChoose a country/region for shopping.
© 1996-2022, Amazon.com, Inc. or its affiliates