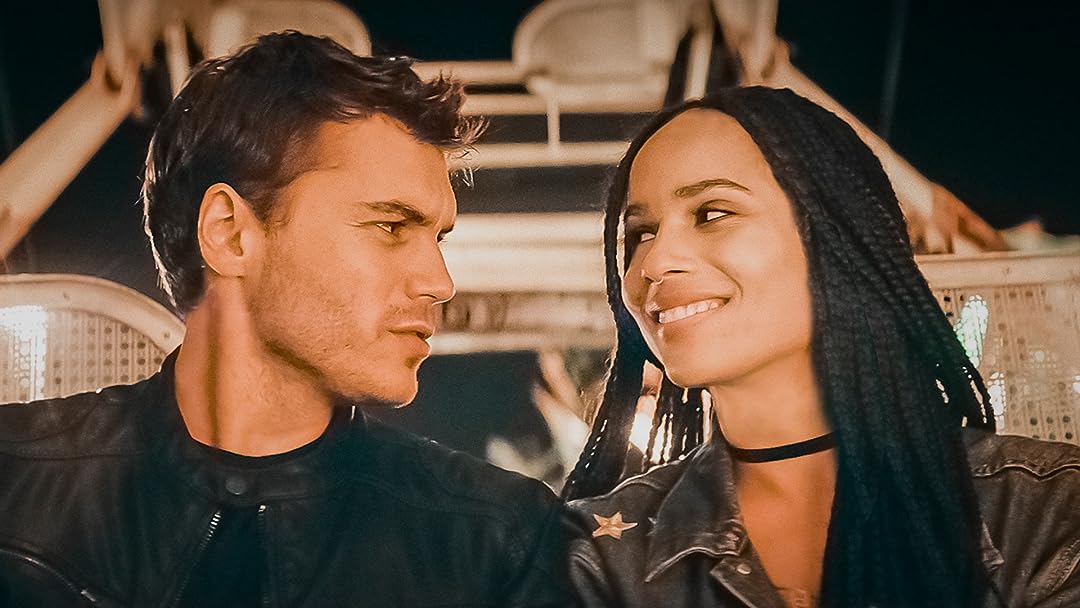 (76)
5.61 h 41 min2017R
Vincent (Emile Hirsch), a small town loner, and Roxxy (Zoë Kravitz), a rebellious punk rocker, unexpectedly fall in love as they are forced on the run and soon discover violence follows them everywhere.

David S. McQueenReviewed in the United States on March 2, 2021
4.0 out of 5 stars
Revenge is a Dish Best Served Hot
Verified purchase
Set in a small town in the suburbs of New Orleans, present day.

Vincent is a young man who drives a cool car. He sees a car accident and watches the driver get out and assault the driver (a pretty young woman). Vincent intervenes and thus starts a romance between him and the young woman (Roxxy).

The story drags on in the middle as Vincent goes into the car repair business with his lame brother. Roxxy gets a job in a seedy bar. Not sure what the back story of Vincent is, or of Roxxy either for that matter. Part of it is revealed late in the film. Near the end, a giant plot twist makes up for the boring middle of the film.

This is a violent film, bloody. Very little nudity. Don't expect a happy ending, but stick with it. Worth your patience.

DetectorReviewed in the United States on March 17, 2021
3.0 out of 5 stars
I've watched a lot worse.
Verified purchase
not that great, but having said that, I did watch it all the way through, so it's not that bad, either. Didn't sense a lot of chemistry here. Plot doesn't take a genius. Im not complaining about the climax at the farm which did have some unexpected shock...but it was also a bit fantastical. Talk about suspension of disbelief.
One serious note, though, is this film may be, at this point, begging the thug stereotypes. After all that's happened since this film was made...maybe we ought to leave the sadistic thuggery to WW2 Nazi's.
The car makes a hell of a presentation. A dodge charger?

L.BenzReviewed in the United States on April 17, 2021
5.0 out of 5 stars
Loved every minute of it
Verified purchase
I liked how Vincent and Roxxy met, I liked the way he handled himself. First we have the relationship of the two, then the escape and violence everywhere. It was kind of a sweet movie until it morphed into a Kill Bill type of movie. If you liked Kill Bill you'll like this movie as well.
This is the end, my only friend, the end.

sweetlee213Reviewed in the United States on August 4, 2017
5.0 out of 5 stars
Loved it
Verified purchase
It's a classic love story with a rather gruesome twist. Some people think Hirsch's acting in this is dull, but I loved him in this film. The way he played his character was understated and low-key, which makes sense when you realize that it is simply covering up a great well of violence. Not everyone has to be over the top, people. Zoe is a natural. You imagine she always seems to be playing some version of herself because of the ease she brings to each character. Overall, five stars. Do be warned, the violence gets VERY graphic towards the end.
4 people found this helpful

Amazon CustomerReviewed in the United States on February 23, 2021
5.0 out of 5 stars
Good movie
Verified purchase
Very good movie. Never saw Zoe Kravitz act before and I must say she is quite good and her exotic looks and great body help the movie a lot.
One person found this helpful

TapacUAReviewed in the United States on April 1, 2021
1.0 out of 5 stars
Out of ideas and made up scenes that make no sense
Verified purchase
Same boring actors and all those alike amateur boring new movies

Greg C.Reviewed in the United States on April 9, 2021
1.0 out of 5 stars
Root canal is more fun
Verified purchase
Ginormously idiotic and a huge waste of everything. Mostly bad acting, horrible,gratuitous violence that made absolutely no sense. Boring and dumb!
See all reviews
Back to top
Get to Know Us
Make Money with Us
Amazon Payment Products
Let Us Help You
EnglishChoose a language for shopping. United StatesChoose a country/region for shopping.
© 1996-2022, Amazon.com, Inc. or its affiliates