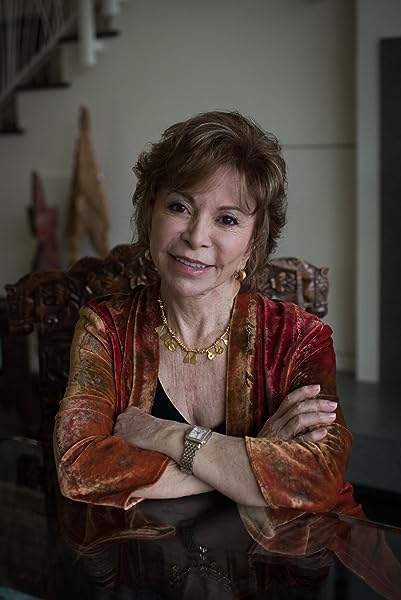 Spanish Edition by Isabel Allende (Author)
4.6 out of 5 stars 7,952 ratings
See all formats and editions
Sorry, there was a problem loading this page. Try again.

This sweeping novel from the New York Times bestselling author of A Long Petal of the Sea tells the epic story of Violeta del Valle, a woman whose life spans one hundred years and bears witness to the greatest upheavals of the twentieth century.

Violeta comes into the world on a stormy day in 1920, the first girl in a family of five boisterous sons. From the start, her life will be marked by extraordinary events, for the ripples of the Great War are still being felt, even as the Spanish flu arrives on the shores of her South American homeland almost at the moment of her birth.

Through her father’s prescience, the family will come through that crisis unscathed, only to face a new one as the Great Depression transforms the genteel city life she has known. Her family loses all and is forced to retreat to a wild and beautiful but remote part of the country. There, she will come of age, and her first suitor will come calling...

She tells her story in the form of a letter to someone she loves above all others, recounting devastating heartbreak and passionate affairs, times of both poverty and wealth, terrible loss and immense joy. Her life will be shaped by some of the most important events of history: the fight for women’s rights, the rise and fall of tyrants, and, ultimately, not one but two pandemics.

Told through the eyes of a woman whose unforgettable passion, determination, and sense of humor will carry her through a lifetime of upheaval, Isabel Allende once more brings us an epic that is both fiercely inspiring and deeply emotional.
Read more
Previous page
Next page

Born in Peru and raised in Chile, Isabel Allende is the author of The House of the Spirits, Daughter of Fortune, Paula, My Invented Country and The Japanese Lover. Her books have been translated into more than 35 languages and have sold over 65 million copies worldwide. The Japanese Lover was an international and New York Times bestseller. She lives in California.

LA in Dallas
3.0 out of 5 stars One hundred years of oppression
Reviewed in the United States on February 7, 2022
Verified Purchase
First, an apology. Although I am reviewing the Spanish version of Violeta, this review will be in English. I read Spanish fairly well, but write it poorly. Because Amazon forbids mixed-language reviews, I translate the quotes below to English.

Violeta is told in the first person by Violeta del Valle, a character reportedly based on Isabel Allende's mother. Violeta was born during the Spanish flu pandemic in 1920. The Spanish flu is generally dated to 1918, but delayed a couple years in reaching Chile, as she explains. (By the way, the country in which Violeta was born and in which most of the story takes place is never named in the book, but it is obviously Chile. Other nations are named when the action is taking place in them, for instance Argentina, Estados Unidos, Congo, Norway.) Violeta survives from pandemic to pandemic:

"I was born in 1920, in the influenza pandemic, and I'm going to die in 2020, in the coronavirus pandemic. Such an elegant name for so malignant a bug!"

Early in her story Violeta receives this advice from her teacher:

"You are not a brat. Defend your independence, allow no one to decide for you. For that you must be able to value yourself alone. Do you understand me? -- she told me. I have never forgotten that admonition."

That is very uplifting, but in the event is not necessarily great advice to give to a girl who lives in a time and place where women have no rights that a man is bound to respect. Violeta makes some stupid decisions. Now, it is not a great character flaw to make stupid decisions. Even the smartest people do stupid things sometimes. The consequences depend on many things, among them whether you live in an environment that tolerates error. Violeta does not, and as a result is unhappy for much of her life. But happiness should not necessarily be ones life goal. Violeta is in fact an intelligent and capable heroine, who accomplishes much in her life. So don't give up on her, even though you will feel the urge to strangle her more than once.

My review title, "One hundred years of oppression", is somewhat misleading. It is not inaccurate -- oppression is a continuing theme throughout the hundred years of Violeta's life. However the focus gradually shifts from suffering oppression to fighting it as the story goes on. The book ends on an uplifting note.

My main problem with Violeta is that the story is not a story. It's just a long recital of the things that happen to one person. There is little structure, nothing of that "a Beginning, a Middle, and an End" that Godard said a story should have. Actually, as Violeta herself recognizes, there are many beginnings, many middles, and many ends in her story.

Now, your mileage may vary, but for me this lack of structure seriously detracted from the value and enjoyment of Violeta. There is of course the argument to be made that an unstructured list of events one after another is a more accurate reflection of real life than a well-told story would be. I agree, but I am not so attached to realism as to be indifferent to story-telling. I am a fan of fantasy and science fiction. As Somerset Maugham wrote, "A true story is never quite so true as an invented one." That is a little too suspiciously glib, yet there is a real argument to be made for Maugham's claim.
Read more
21 people found this helpful
Helpful
Report abuse

B
5.0 out of 5 stars Easy but captivating read
Reviewed in the United Kingdom on May 23, 2022
Verified Purchase
Isabel Allende never fails to disappoint and she has done it again, writing once again about a powerful woman, whose journey starts as a privileged child from a large, wealthy Chilean family to a long 'adventure' which spans a century, from one pandemic to the next. Excellent read.
Read more
Report abuse

Rafael Chavez
5.0 out of 5 stars Splendid!
Reviewed in the United Kingdom on February 9, 2022
Verified Purchase
I’m still enjoying the book. I like it a lot, simply put…
Read more
Report abuse
See all reviews