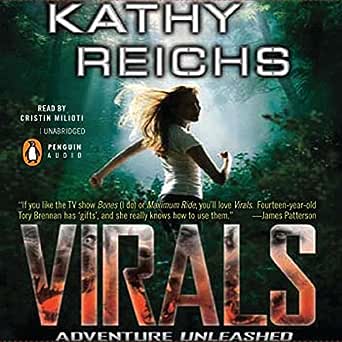 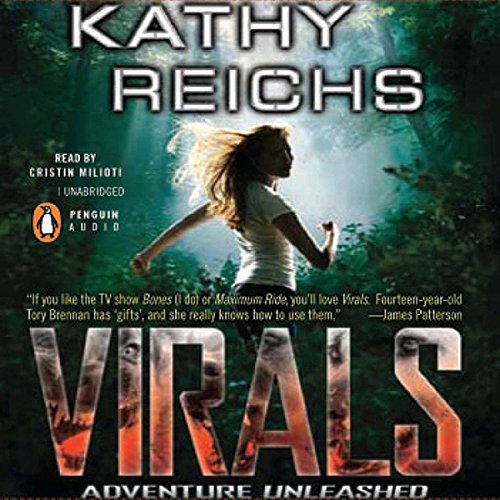 4.5 out of 5 stars
4.5 out of 5
708 global ratings
How are ratings calculated?
To calculate the overall star rating and percentage breakdown by star, we don’t use a simple average. Instead, our system considers things like how recent a review is and if the reviewer bought the item on Amazon. It also analyzes reviews to verify trustworthiness.
Top reviews

Constant Rearder
5.0 out of 5 stars Virals by Kathy and Brendan Reichs
Reviewed in the United States on May 31, 2013
Verified Purchase
This is another book mistakenly listed as for Youthful readers. If one is into the Paranormal, adults will truly enjoy "Virals" the first in a new seres. The heroine, Tory Brennan, the grandniece of the Bones Serie star, Temperance Brennan, is 14 year old, has just lost her mother in an aut accident and has moved in with her father, a scientist living on one of the islands of the coast of South Carolina, and working in an animal reserve and research laboratory on another. She has three friends, boys from the age of 14 to 16 who are children of other employees on the same research laboratry island. The four of them are enrolled in a posh school on the mainland and are outcasts there.

Curios kids, they investigate one of the labs and find a puppy, a half wolf / half German Shepherd offspring of the wild wolf inhabitants of the island, hooked up to all sorts of wires an tubes--with his cage marked for his extermination. They grab the pup and run back to their own island home.

And each comes down with whatever has infected the pup, with varying degrees of illness. Tory's dad refuses to let her have a pet, so the four kids keep the pup in an old abandoned WWII defense bunker they've found on their island.

Tory's dad's employer, the doctor who's lab they stole the pup from, finds them and warns them that they might have unfortunate results from the illness they contracted from the dog--just as their bunker is attacked by unknown gun shooting men. The doctor sends the kids and pup through the escape tunnel, then collapses it so the kid can escape, but is killed in the aftermath.

The rest of the book is devoted to finding out who and why they were attacked, what has happened to them as result of catching the dog's virus, and learning what to do with themselves with these new powers.

Tory's life is complicated by a crush on the richest kid in school, and n Charlotte society, her dad's ditzy girlfriend who insists she prepare for her "comng out"--something the tom-boy Tory is not interested in at all, and the way the snobby kids in heir school treat these outsiders.

All in all a fun and interesting book to read--IF one is interested in anything paranormal.

Melanie D. Typaldos
4.0 out of 5 stars Slow beginning, fast paced end
Reviewed in the United States on August 20, 2015
Verified Purchase
First off, I do not think this book is young adult. It reads much more like middle grade.

At the beginning I did not like the voice of the main character. I thought the author was searching too hard to capture today's youth and coming up with something that was just hard to read. Over the course of the book, I became more used to the voice and it was less bothersome.

I like that there is a strong girl protagonist who is not pitted against other girls. So many books about girls don't seem to think that a girl can stand up to boys or men as the antagonist. Also, the main character has four friends who are all boys. Not sure if that is good or not, but she is definitely their leader.

There are a couple of inconsistencies in the book. For example, at one point one of the kids describes the World War 1 as being in this century. Even I don't consider that this century since that was in the 20th century and we are now in the 21st. Plus all the kids in the book would have been born after the turn of the millennium so the 1910s would seem like ancient history to them. In fact, given that it is now 2015, WW1 was more than 100 years ago.

That's all pretty minor though. The book gets off to a slow start, although interesting. By the end it has picked up a lot of momentum, becoming something of a thriller. There is a bit of blood, gore, and murder involved but not more than your average kid could handle.
Read more
4 people found this helpful
Helpful
Comment Report abuse

Cecelia
4.0 out of 5 stars Perfect for reluctant readers who enjoy action adventure movies
Reviewed in the United States on March 28, 2017
Verified Purchase
Take one part science, two parts mystery, and a half portion of teenage angst. Mix in water travel, adventure, and an uninhabited island wildlife preserve, and what do you get? Non-stop action!

Virals was lively action in a captivating setting with mystery, science, and a sprinkling of danger to make life interesting. In other words, plot-driven excitement that put me in mind of the best that a Nancy Drew/CSI/Lost sort of adventure could conjure. For what it was, it was entertaining.

So – down to the meat – what wasn’t it? Number one: a love story. Not that it couldn’t develop in the future, mind you, but this one isn’t it. Number two: big on character development. You may have seen the words ‘plot-driven’ above. I meant them. The book isn’t shallow, but it’s not a platform for deep thoughts or character change, either. It’s an adventure story. Number three: girls-only reading. I think that Virals will appeal mainly to guys. I KNOW it’s got that tomboy and science geek thing down pat, but the next most likely audience (in my opinion) is the male half of the teenage equation. Great adventure reading, mysteries, and unexplained diseases? Should appeal to both sexes.

Final verdict: worth the read. While this wasn’t one of my typical choices, it entertained me for a couple of hours on a rainy day, and the non-stop action was a great diversion. I’ll be looking out for the next installment.

Recommended for: mystery and action lovers, those Nancy Drew and Hardy Boys readers all grown up, fans of Bones, CSI and other mystery/forensics shows, and perhaps that reluctant teen reader you know – guy or girl – who might be thrilled by a little bit of action adventure.
Read more
2 people found this helpful
Helpful
Comment Report abuse
See all reviews

G. M. Banks
4.0 out of 5 stars Aimed at YA readers - but has a wider appeal
Reviewed in the United Kingdom on November 1, 2011
Verified Purchase
I really don't understand the reviwers of this book who complained about not realising it was YA fiction. I would have thought that the briefest reading of the blurb or the first few pages would have made this quite evident. Having said that, the 'older' reader should not be put off. I am well(!) beyond YA status and I found the book to be a complete page turner. Yes the language isn't complex; yes there is a requirement to suspend disbelief at various points in the narrative - but it's fun. It's not meant to be a literary classic - it's meant to be a book that tells a story, and in my opinion it tells it just fine. I would also question why references to Enid Blyton and her 'Famous Five' are used as an insult. I grew up reading these books - and others like them. They gave me the passion for reading which I still have. I moved on to other authors and other genres as I grew older but I still retain a great fondness for a well told adventure yarn. 'Virals' is a story about a group of school friends thrown into a situation beyond anything they've ever experienced - and is the first in what is to be a series of books about their adventures, and the changes wrought in their lives by a chance event. I'll be keen to read 'Seizure' - the next book in the series - and see how those adventures continue. So don't be put off by some of the poor reviews, This book may be specifically aimed at a certain demographic - but it's a good read at any age.
Read more
5 people found this helpful
Report abuse

MissShinx
5.0 out of 5 stars An enjoyable change of audience & direction from Reichs
Reviewed in the United Kingdom on December 3, 2011
Verified Purchase
I have read several of Kathy Reichs' other books, and have always found her to be an interesting writer. I found them slightly heavy going sometimes so I decided to give 'Virals' a try as it was a different series.

Although Virals is aimed at a younger audience I found it very enjoyable. I don't quite understand why readers seem annoyed at it being for young adults, yes the story is less realistic than her other series, but I didn't find there was a lack of story line or anything particularly 'childish'.

Kathy Reichs has managed to write a different type of book with the same gripping story line as her previous novels, and I am really impressed. I purchased the kindle version (for full price of ~£8) and couldn't stop reading it. At one point I was slightly concerned she was going in the direction of the whole vampire and werewolf trend at the moment, but I assure you she is not. With her own unique twist it's a great read and if you are a Kathy Reich fan, give it a go! It is under a fiver now for the kindle version!

I give it 5/5, a great story, little less heavy and realistic than previous books but that didn't stop me from enjoying it thoroughly. Whether or not others agree, I loved it.
Read more
3 people found this helpful
Report abuse

Cranston
5.0 out of 5 stars A great series.
Reviewed in the United Kingdom on April 17, 2018
Verified Purchase
I bought all Virals books for my grandson who loved them all and he was hoping that there would be Virals 6 in the future. I would say that they are aimed at a teenage audience but a good read for anyone.
Read more
Report abuse

Stephen
3.0 out of 5 stars Good, but not great.
Reviewed in the United Kingdom on July 1, 2016
Verified Purchase
This is a good, not great, story. I have recently discovered Kathy Reichs, and enjoy her books. Be aware though that this book is targetted at teenagers, and the story-line starts well, but becomes less believable as it goes on. It very much depends on your expectations as to whether you will enjoy this book or not.
Read more
Report abuse

Morrison1976
5.0 out of 5 stars Very good read
Reviewed in the United Kingdom on October 16, 2014
Verified Purchase
This book I would recommend to many people in the right age group with mild swearing and cursing I think the correct age group would be around 11+ . The story gets more exciting throughout the book it starts of quite slow and builds from there. I do not want to give to much away but the story line is about a teenage girl and her three friends (who are boys) sneak into a lab and catch a dog virus that has been modified to infect humans .
Read more
One person found this helpful
Report abuse
See all reviews