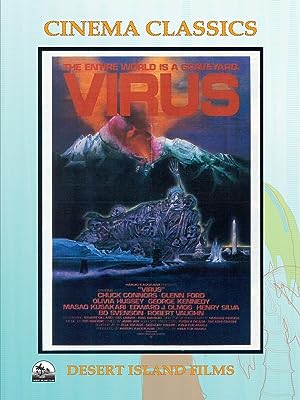 (195)
6.21 h 48 min1980R
A military-engineered virus, released during a plane crash, kills the entire human population. The only survivors are scientists in Antarctica, who desperately try to find a cure and save what is left of the planet from further destruction.

Watch with Fandor
Start your 7-day free trial
Add to
Watchlist
Redeem a gift card or promotion code
By ordering or viewing, you agree to our Terms. Sold by Amazon.com Services LLC.
Write review

All American ReviewsReviewed in the United States on September 1, 2019
2.0 out of 5 stars
An Oldie, But Not A Goody
Verified purchase
This is one of those older (1980) big-budget disaster films that unfortunately just has not held up very well. It is greatly complicated by the fact that the copy of the film that Amazon is streaming is in absolutely horrible shape. To begin with, it's formatted in 4:3 pan-and-scan, so much of the picture is trimmed out. It's also of lousy physical quality. The colors are washed out, the image is fuzzy and there are plenty of defects in the print. The audio is similarly in bad shape with a high noise level and constant pops and cracks. So, even if the content was that good the presentation is horrible.

Back to the film itself, it has some absolutely horrible acting and some ridiculous lapses in logic. Even the casting is seriously messed-up. Perhaps the most ridiculous aspect of the film to me was the casting of Chuck Conners as a British submarine commander. What's crazy about it is that he does not even attempt a British accent at any point in the film. He sounds the same as he does in every other American film, which makes absolutely no sense. Hearing him use English phrases with an American accent is like hearing nails on a chalkboard.

Perhaps one of the (unintentional) funnier moments in the film is hearing Eddie Olmos SINGING. Hearing the former Miami Vice and Battlestar Galactica actor belting out a tune was just so over the top that it actually had me laughing out loud. I wonder if a soundtrack to this film was ever released?

Robert Vaughn's performance was ridiculously bad. He's never been my favorite actor, but even for him this was an absolutely embarrassing performance. Glenn Ford's part was rather small but at least he did not make a complete fool of himself. George Kennedy was... well, George Kennedy. Masao Kusakari was the only one who turned in a half-believable performance. He seemed to do the most he could with such a ridiculous script being handed to him.

The overall plot was as ridiculous as it was utterly pointless. I had hoped that the movie would turn around with a decent ending at least, but that never materialized. In the end I was just happy that the film was over and wondered why the studio would even allow it to be released. It certainly had a lot of potential with the cast and budget involved. The producers might as well just have flushed their budget straight down the toilet though.

A. GarciaReviewed in the United States on September 11, 2018
5.0 out of 5 stars
A intelligent post-apocallyptic movie
Verified purchase
This is one of the best surprises I have had in Prime Video. It is a Japanese movie with an international cast, including George Kennedy, Glenn Ford, Olivia Hussey, Edward James Olmos, Masao Kusakari, and Chuck Connors, among others. This is the English-dubbed version (according to what I read in Wikipedia, the Japanese version is longer, and the plot ends later). It is also a copy from video, so the quality let something to be desired. But it is still a very intelligent post-apocallyptic movie, besides being the most expensive Japanese movie made up to that time (1980). For anyone who grew up during the Cold War is a sobering reminder of the dangers of WMD, and how not even our best minds can save us of madmen with power. You can certainly tell that the Japanese producers had no faith at all in the "wisdom" of the nuclear powers. Anyway, I enjoyed it, and I felt it feels particularly relevant for our time.
17 people found this helpful

Avid readerReviewed in the United States on October 22, 2020
3.0 out of 5 stars
For those old enough.....
Verified purchase
This is a Japanese film released in 1980, and as such for the American audience, has a lot of the names that people of that time would readily recognize. And it captures the paranoia of the times very well. So if one was around at that time, the movie will have much more relevance. It is narrow screen, and the print quality leaves a lot to be desired. The plot is rather simple. A rogue military secret program has developed a super virus, which is dormant when very cold, but a lethal and a fast replicating one above freezing. A renegade General is responsible for it, and he also activates the ARS (Automated Reaction System) as one of his final acts. (The ARS has a counterpart in the Doomsday weapon of the Dr. Strangelove movie.) As all life is killed off, there still are a group in Antarctica who can make a last stand for civilization to continue. There are 855 men and only 8 women, so naturally there are discussions on that implication. It might be fascinating to see how that same topic would be shown in today’s movies. Anyway, the removal of oil from drilling off the Atlantic Ocean could trigger an earthquake, which would then set off the ARS, and then Russia would immediately respond when the first missile lands in Russia. And naturally, the Russians thought the base at Antarctica was a secret military base, so it would be targeted. Or as stated in the movie, America did not have a monopoly on stupidity. So a mission is sent to deactivate the ARS in Washington, D.C. I give it three stars because it would have relevance to a much smaller (and older) audience.
One person found this helpful

Amazon CustomerReviewed in the United States on September 22, 2018
2.0 out of 5 stars
SAVE YOUR TIME...
Verified purchase
this movie shows its age in video/sound quality and seriously outdated/flawed scientific background. Add in bad writing, mediocre acting and unfulfilling ending. Not to mention the ridiculous concept of 8 women and hundreds of men to repopulate the planet. Leading to worst aspect--- women are forced (literally and figuratively) into 'servicing the men' and becoming brood mares to repopulate the world. one word... INBREEDING. gave it 2 stars instead of one for the sole reason that there were no zombies.
6 people found this helpful

Qst4Reviewed in the United States on April 12, 2020
1.0 out of 5 stars
Terrible
Verified purchase
The sound and picture quality are horrid and the story line is just as bad. The concept was good, but everything else was a mess. But what killed me the most was how they brushed aside rape. Lol, the "Accommodation" of more than one man. And then there was the British ship commander speaking with an American accent. How did anyone think that made sense. I guess I just expected more. With movies like the Andromeda Strain, The Thing, The Day After, Aliens etc, and some how in 1980 this piece of hot garbage got produced.
One person found this helpful

Henry CommentReviewed in the United States on January 23, 2021
5.0 out of 5 stars
Fitting during COVID
Verified purchase
I liked it although audio/video was not the best. What do you expect? It's a 1980 film. Very fitting movie for COVID times when the global population is pitted against a viral enemy. Pretty ahead of its time considering a drone was deployed to survey a devastated Japan. Makes you reflect especially in these gloomy times. Watch it. You just might learn something.
One person found this helpful

Christopher G. CanoReviewed in the United States on April 5, 2020
5.0 out of 5 stars
1980s Post-Apocalyptic Movie with a Modern Twist
Verified purchase
The reason why I gave this movie five-stars was based on when I originally viewed the movie which was in the early 1980s. I simply loved the story and though there are plot holes, the film speaks to a world we all know. Unfortunately, this version of the movie is not the version I originally watched. The version I watched had the hero making it out of the bunker and wandering the Earth eventually finding his love. This version allows us some closure. If you have some time to watch this movie, especially since the world is on lockdown with Covid-19, it will resonate with you given current world events.

Mr. Masanori NishiReviewed in the United States on June 17, 2012
5.0 out of 5 stars
This is the way of presenting the movie should have been.
Verified purchase
A good news, everyone: Amazon has now carries the newly published original Sakyo Komatsu's 'VIRUS,' has been translated into English on a hard cover book format. Look for and find it in Amazon's literature section or in the recomemdations or the related matterial section at the bottom or above this review section.

Now, this is the point where my original revew begins:

Please DO NOT under rate the movie 'VIRUS' before you watch this DVD. It's an almost completely new movie with much greater in geological, scientifical, and even political aspects of the decade of '80s. For those of you have been deeply disappointed by the erlier, edited, shortened version of the film, now it's the time to fully appriciate the movie.

I really feel relieved when I watched this DVD, which had been professionally prepared from the original Japanese mortion picture released back in 1982 in such a superb quality, knowing this the the way in which everyone of us should have watched. The DVD presentation contains the entire 156 minutes of the original Japanese feature length of the same tittle based on the late famous Japanese Science Fiction writer Mr. Sakyo Komatsu of 'Sinking of Japan' in the late 1970s.

The aspect ratio of the DVD image is the right match of the original movie, as well as the entire original sound track of music scores of Italian composer of Teo Masero. The scerenaries of the Antartica are brathtaking and absolutely beautiful. I believe this is the first comarcially produced movie/drama shot on locationed there, with full cooperation of Chillian Navy submarine: Yes, that sub was a real one! Sound quality was good, too.

Speaking of the music, I must point out the fact that the beautiful and very lyrical original theme song of the movie was written and sung by Janis Ian. Listening into her song alone might bring tears in your eyes. It's that emortional song and music.

I do recomend this DVD to everyone or anyone, especially to whom thought the 'VIRUS' was a less important SciFi movie made with a B- or C-level or less-than-the average production. I asure you that it would give you a whole new impression of the movie. One last note: Please remember this fact that the original novel on which this movie was based, was written about some 40(yes, that's right, fourty) years ago: It was when no one cared or even knew about a biological warfare or the pandemic using or caused by a simple virus. I think it was written even before 'The Andromeda Strain" by Micheal Criton in the late '60s or the early '70s. The entire story and all events were taken place inside of one geneus, a science fiction writer called Sakyo Komatsu.
18 people found this helpful
See all reviews
Back to top
Get to Know Us
Make Money with Us
Amazon Payment Products
Let Us Help You
EnglishChoose a language for shopping. United StatesChoose a country/region for shopping.
© 1996-2022, Amazon.com, Inc. or its affiliates