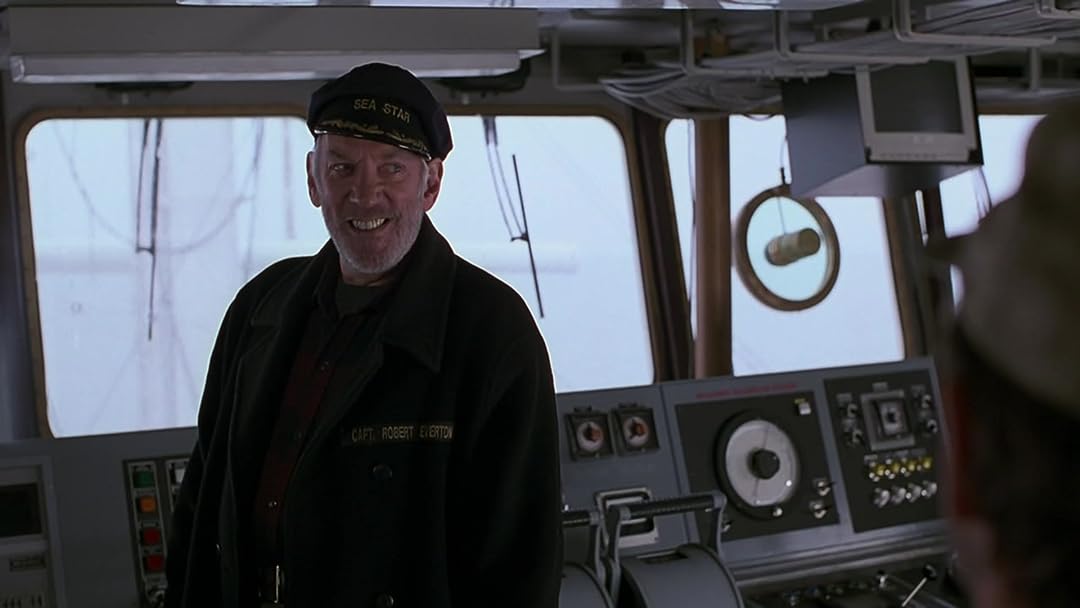 Tim F. MartinReviewed in the United States on July 23, 2018
4.0 out of 5 stars
Not bad, a bit underrated science fiction thriller
Verified purchase
Not a bad science fiction thriller, I am surprised I missed it when it came out and just now in 2018 have viewed it. It wasn’t spectacular but I enjoyed it, I thought the pacing was good, it had a great cast, and the suspense in the earlier parts of the film was very well done.

The plot centers around an alien entity made of electrical energy that makes it way to a Russian research vessel in the South Pacific. The ship, Akademik Vladislav Volkov, in communication with the Mir space station, is attacked by what looks at first like a powerful electrical surge, one that kills the cosmonauts and once on board the Russian research vessel, renders the ship a derelict at sea.

A week later, a tugboat named the Sea Star, captained by alcoholic and depressed Robert Everton (played by Donald Sutherland), along with navigator and apparent second in command Kelly Foster (played by Jamie Lee Curtis) and engineer Steve Baker (William Baldwin), make their way into the eye of a typhoon. In danger of sinking from the storm and the captain suicidal over losing a cargo to that same storm, a cargo they were towing that might have resulted in the loss of the Sea Star and all aboard, they discover a radar contact sharing the eye with them, something they soon come to realize is the Akademik Vladislav Volkov (Foster announcing its identity when the Sea Star is aside the Russian ship, reading from some sort of field guide to ships). Dreaming of a score from a salvage of research vessel with millions and millions of dollars of expensive electronics, robotics, and research equipment, they soon board the vessel, thinking they will be rich.

They find the vessel at first devoid of humanity, even bodies, and though this bodes well for salvage – if even one person remains, they don’t get to claim the expensive ship as salvage – they soon get an eerie feeling from the dark ship. Splitting up – because of course they split up, they don’t know there is an alien monster aboard the ship – they soon find why the ship is derelict, the crew dead or worse. Not to spoil anything I hope, but the combination of hostile alien being that is made of electrical energy and a ship full of robotics and science labs doesn’t bode well for the salvage crew.

I think the movie worked best when the salvage crew was exploring the odd, eerie, creepy abandoned vessel, trying to uncover what happened. Once the alien entity started targeting the salvage crew it didn’t work quite as well, partially because the suspense was gone, partially because I didn’t get that much a sense of horror or fear from what the salvage crew encountered. What the people fought against was certainly dangerous, but it came off less a horror movie and more an action film. Also I don’t think the movie fully realized what they could have come up against, that maybe the effects skill or budget prevented the opponents from being truly as bizarre as they could have been. I did like that the effects seemed mostly practical, I appreciated that, as today those effects would be largely CGI. I think too much of the movie was dark, which while making a lot of sense, made it hard to pick out metal monsters against a metal interior. I also think the way the movie portrayed how an eye of a typhoon works was more than a little off.

Still, I thought it enjoyable and original and I understand the movie is sort of hated by many. It doesn’t deserve that hate and was worth watching.

This movie came out around 1980. Its plot was this:

“A military-engineered virus, released during a plane crash, kills the entire human population. The only survivors are scientist in Antarctica, who desperately try to find a cure and save what is left of the planet from further destruction. Fukkatsu no hi (original title) Also known as Day of Resurrection.”

It had a decent plot for the eighties and a definite post-apocalyptic feel to it.

Amanda HarmonReviewed in the United States on July 5, 2019
5.0 out of 5 stars
Classic cheesy sci-fi action flick.
Verified purchase
Look, this movie wasn't made for awards. This movie was made for pure entertainment purposes. (The way movies were always intended to do) It seems to have attributes from Battleship, Transformers, I Robot and Ghost Ship. If you enjoy movies with easy to follow plots, laugh lines, one-liners, overacting and special effects that take you back before CGI was encouraged to do all the work..... You won't be disappointed. Worth the watch if you have a little time with nothing else to do.
3 people found this helpful

Hande ZReviewed in the United States on December 10, 2018
4.0 out of 5 stars
Stars gone viral
Verified purchase
This may not be deemed worthy of a four-star rating on artistic merits, but that may be too harsh and snotty way of assessing this film. So far as entertainment is concerned, this film, made 20 years ago, in 1999, is a highly enjoyable film. It has action and suspense, and even the villain is not quite what one might imagine a villain to be. Donald Sutherland and Jamie Lee Curtiss put up a wonderful performance. It is partly for that reason that the film is still enjoyable today.
3 people found this helpful

Movie Connoisseur:Reviewed in the United States on September 29, 2021
5.0 out of 5 stars
Underrated Film..
Verified purchase
All the actors and behind the scenes crew did a great job 👏. The bluray is exceptional and just a great way to spend a couple hours + with some cool extras to view. Shout Factory does great with extras for the most part and uses the best transfer available 👍. I'm amongst the others who were highly upset with the All in the Family series dvds though. But I've personally forgiven them with these aylsum blurays.

University DocReviewed in the United States on September 8, 2020
5.0 out of 5 stars
Entertaining film! Highly recommend!
Verified purchase
Was surprised by this film. It is better than we thought it would be. Great cast of actors bring a interesting take on a story to life. Highly recommend. Balanced audio and video. Watch it and don’t take it seriously for the greatest benefit.

RMHReviewed in the United States on March 30, 2021
5.0 out of 5 stars
GREAT STORY.
Verified purchase
THIS IS ONE OF THOSE HIDDEN JEWELS THAT DESERVES A BETTER REVIEW FROM ITS TIME AND WHAT THEY WERE ABLE TO DO WITH THE TECH THAT THEY HAD AT THE TIME, VERY COOL! LOVE THIS MOVIE. THANK YOU, RMH. AMAZON ROCKS!

debjeffReviewed in the United States on August 7, 2019
4.0 out of 5 stars
Young Jamie Curtis and Cliff Curtis; not related
Verified purchase
I enjoyed this movie strictly as entertainment. What I enjoyed most is to go back to the Jamie and Cliff 20 years ago and see where they are now. Film worth the watch; Donald Sutherland also in character as the pushy, cranky Captain.
See all reviews
Back to top
Get to Know Us
Make Money with Us
Amazon Payment Products
Let Us Help You
EnglishChoose a language for shopping. United StatesChoose a country/region for shopping.
© 1996-2021, Amazon.com, Inc. or its affiliates