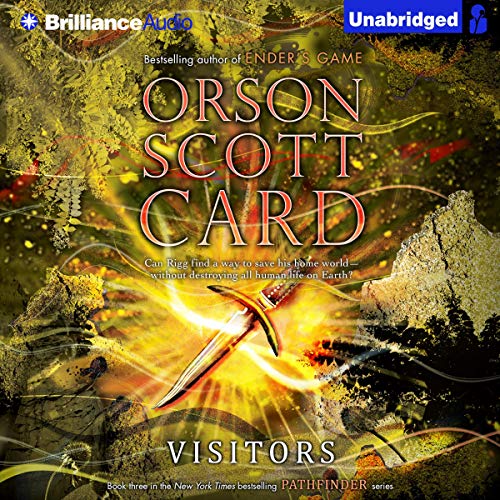 List Price: $17.49
You Save: $2.50 (14%)
By completing your purchase, you agree to Audible’s Conditions Of Use
Sold and delivered by Audible, an Amazon company
Share

4.2 out of 5 stars
4.2 out of 5
413 global ratings
How are ratings calculated?
To calculate the overall star rating and percentage breakdown by star, we don’t use a simple average. Instead, our system considers things like how recent a review is and if the reviewer bought the item on Amazon. It also analyzes reviews to verify trustworthiness.
Top reviews

Pistol Pete
2.0 out of 5 stars Finish if you must, but not as fun as first two
Reviewed in the United States on November 6, 2014
Verified Purchase
I really enjoyed the first two Pathfinder books. Great story, great characters. But the third installment was just too much. Too many characters (including duplicates!), too many storylines, too many planets. It was like cramming 19 Back to the Future storylines in one book. There were so many timelines going on, it felt like the one that was chosen was almost arbitrary. I plowed through to the end, but overall, I was disappointed. Card is a great storyteller, and I am a huge fan of most of his stories, but not this one. It was just too hard to care about the million different story lines and characters.
Read more
32 people found this helpful
Helpful
Report abuse

Tom Hasara
2.0 out of 5 stars Does the ending contradict the premise?
Reviewed in the United States on February 2, 2015
Verified Purchase
I need help understanding the ending, so yes, there are spoilers.

First, I'll say I love everything OSC writes! His stories, themes, and political-religious-scientific ideas are compelling, and the Pathfinder series is in many ways a Opus Magnus compilation of all the various themes and ideas of his other works. (Plus I love time-travel). Of course he falls into his usual bad habit over explaining the "science" of something he just made up (do we need to know how a snarful interacts with a grundfel at the sub-sub atomic level?) but I'm
Used to that.

So of course my question is related to the pseudo-scientific explanation he gives for temporal paradoxes, namely how the agents of causal change are unaffected by whatever change they make in a time stream. But whoever is NOT the agent of change (or traveling with that person) will experience a completely different time stream and will have no recollection of any change being made. I am ok with that, it is a common enough theory of time travel fiction and non-fiction.

What confuses me is the ending of Visitors - did Card just throw his on rule, the one he went on and on about, right out the window so he could wrap this up? I mean the very reason Rigg, Param, and Umbo were created was to stop the Destroyers (according to the mice). Back up, the very reason the Future Books, and thus mice, were created was to stop the Destroyers. Well guess what!? - Backward time flow Ram and Irradiated Noxon succeeded in stoping the Destroyers before they ever attacked!! So, yes those 2 and the rest of the group at Treble and Bass planets would remember it the way we read it, because they were the agents if change. But EVERY other character would have no idea. Even if we assume that our heroes (and the mice) were still created despite the fact that the Destroyers NEVER attacked (seems unlikely, but ok) they certainly would not be sitting around and talking about how their plan worked to stop the Destroyers!

Sorry, but am I missing something here, or is that the sloppiest ending he has ever written?

Jmatt
1.0 out of 5 stars I wish I had my $11 back
Reviewed in the United States on April 1, 2015
Verified Purchase
I have to say, this book was a letdown for me. I really liked the first book unreservedly and liked the second book, although not quite as much. However, this book was awful. The absolute worst were the interminable paragraphs full of conversations which can be condensed to: "You don't Trust me" "Well, you don't trust me either" "But you're being mean because you don't trust me" "Well, you've proven that you're untrustworthy". These ridiculously long passages are then summed up with "Well I'm going to do this-and-such anyway because {circle one} (I really want to/you can't stop me/I can't know if you're trustworthy and I've gotta pick something)".

The bottom line is that it felt to me as if Card had about enough material for two books, but decided to stretch the 2nd book into two, with most of the good stuff being packed into Ruins. After all, I'm already out the money for this book, whereas if Ruins was this awful i never would have shelled out the cash for this one.

In the good column, I liked the twist that the destruction was caused by a third set of aliens; I didn't see it coming and it was nice twist.

In the overwhelmingly awful column:
1) As far as I can tell, it made absolutely no sense for Param and Rigg to leave the knife and warning for Umbo to find after Hagia and Haddamander sprung their trap. They *survived* the trap, they had the data about the invaders, so why not just show up in person to meet Umbo and then lay the smack down on Hagia & Haddamander? Or let H&H go, or whatever? Instead Card spouts some rubbish about how they don't want to make copies and then gets all angsty about how they'll have to go die in a fire when the destroyers come. Ok, lets think about this. They were in the trap, then they escaped, then they came back. Copies of people are made when someone changes the past, but in this case there's absolutely no need to change the past - everyone survived just fine.

2) On the topic of Hagia & Haddamander, Card wastes a ton of time in the book describing the plan to defeat H&H, but in the H&H turn out to be completely irrelevant and Card barely (if at all) mentions then at the end of the book

3) Too much time wasted with descriptions of neanderthal hunting techniques, erectid hunting techniques, erectids inventing monogomy, discussions between the two Wheatons, etc. I mean I get it that if I had time travel powers I'd absolutely want to go sight-seeing. But the digressions into the past on Earth make me feel like I reading about someones slideshow about their vacation to some foreign country.
Read more
7 people found this helpful
Helpful
Report abuse

David Andersen
2.0 out of 5 stars The first Card dud?
Reviewed in the United States on November 14, 2014
Verified Purchase
I am sorry to say that I finally found an Orson Scott Card Book I didn't enjoy. The first book of this series was great, and the second was nearly as good, but this third...failed. Card gets lost in the possibilities of time travel and for the first time (I have seen) gets shallow with his characters. Things just happen for no real reason, and without developing the plot established in the first two books. The characters stop maturing and just kind of do things. Things happen, but without any explanation of why the characters would do this. Subplots emerge, and then are dropped. This seems like he intended to write two or three more books but then condensed them into one hollow book. That may have been a good decision, because the direction this book goes in is just dull, and seems like Card was grasping at a plot twist that didn't fit. I am glad that it mercifully ends here. I can only hope that Card regains his talent in other series.
Read more
11 people found this helpful
Helpful
Report abuse
See all reviews

robert miller
2.0 out of 5 stars LABOURIOUS!
Reviewed in the United Kingdom on September 25, 2019
Verified Purchase
If you enjoy OSC then avoid this trilogy. It might have been an OK book had it not been for the time-travelling. This phenomenon & the mechanics of causality surrounding it, require continual explanation in order that the story makes sense. So much so that the book is rendered tedious & labourious.
Read more
Report abuse

Captain Cretin
5.0 out of 5 stars OSC for President!!
Reviewed in the United Kingdom on September 27, 2017
Verified Purchase
Keeps you guessing untill nearly the end; a great climax to the trilogy.
Read more
One person found this helpful
Report abuse

Amazon Customer
4.0 out of 5 stars Four Stars
Reviewed in the United Kingdom on January 18, 2018
Verified Purchase
not read yet
Read more
Report abuse

David Potter
2.0 out of 5 stars Two Stars
Reviewed in the United Kingdom on November 24, 2014
Verified Purchase
didn't enjoy the book - didn't flow for me and I found the time jumping paradoxes irritating
Read more
One person found this helpful
Report abuse
See all reviews
Back to top
Get to Know Us
Make Money with Us
Amazon Payment Products
Let Us Help You
EnglishChoose a language for shopping. United StatesChoose a country/region for shopping.
© 1996-2021, Amazon.com, Inc. or its affiliates