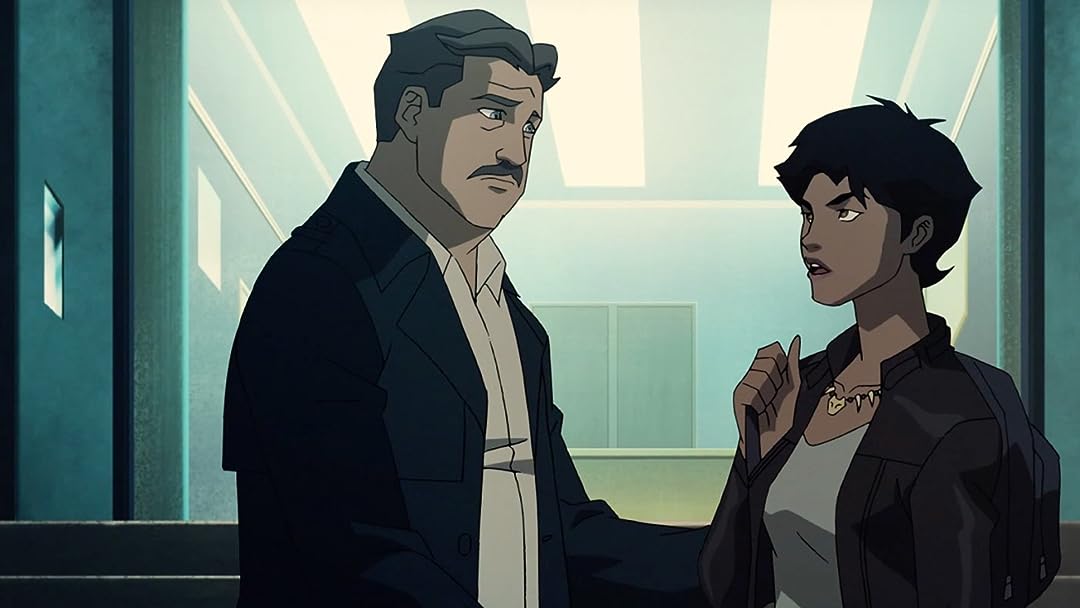 (669)
6.51 h 14 min2015NR
The animated series VIXEN is produced Blue Ribbon Content and based on DC characters. Originally from Africa, Mari McCabe (voiced by Megalyn Echikunwoke) grew up an orphan after her parents were killed by local greed, corruption, and wanton violence. But Mari refuses to succumb to the terrors surrounding her.

Yusuf IsmailReviewed in the United States on September 16, 2017
5.0 out of 5 stars
More female DC hero focus in the animated universe is a great thing
Verified purchase
Story-line wise not as great as the usual DC Animated Movies (in it's implementation, origin stories are always fun), but it was nice to see a new DC hero get some attention this time. Usually it's always just Batman as the focus. Her costume is quite different from the comics, I was disappointed in how they ended it with her new costume that's extremely generic. The first costume she made herself was a lot more eye-catching and symbolic but still a far cry from the comics overall yellow designs I've seen.

With her final costume, you wouldn't be able to tell that this was Vixen if it was your first time seeing her after the comics. Way too much black and grey. She's not another Batman.

In terms of the Blu-Ray that we get, only downside is that DC and Warner have decided to cheap out. There is one-disc, and instead of it having a colored disc it's just a dull see-through blue-ish colored disc. I buy these to collect them, this wasn't very nice. At the very least, the Blu-ray package was encased inside another identically-designed box. I've attached pictures to show what it looks like.

Overall, I enjoyed the movie greatly. This also arrived quite quickly, especially considering I live in Malaysia it took about 2 weeks, I was expecting a month. Thanks for the quick service Amazon.

Mike EscoReviewed in the United States on August 26, 2019
5.0 out of 5 stars
Good price for an equally good movie.
Verified purchase
I enjoyed these webisodes on the CW Seed and the airing on the CW as a full length movie. It’s a nice addition to the Arrowverse explaining the lore and origin of Vixen.

In this particular blu ray disc you get the movie and digital copy which I applied to my Vudu collection even though Ultraviolet shuttered mid 2019. As is customary of DCAU blu rays you get a documentary of the title character and top picks of Bruce Timm’s Episodes from Justice League Unlimited circa early 2000’s. If you don’t have DC’s streaming service and don’t feel like commercials on CW Seed this is a nice addition to any DC fans collection.

D. HowardReviewed in the United States on July 30, 2017
5.0 out of 5 stars
DC Does It Again!
Verified purchase
I LOVED this movie! It was a great effort at her origin story and I'm really glad it showcases a female, comic book hero of color that many may have never heard of. I like the 'From the DC vault' selections one of which is one of my favs from JL Unlimited. It was also a nice touch to use the voice talents of the actors from the actual characters from the CW show so it came across as seamless. Good job DC Animation, I look forward to seeing more Vixen adventures!
6 people found this helpful

Amazon CustomerReviewed in the United States on November 12, 2017
5.0 out of 5 stars
Happy customer waiting for more DC works like this or better !!!
Verified purchase
This is a great DVD Adventure and to add another new part of the DC world I hope that other characters are given the same attention and seem fair Shake in the DC world and make all of animes for them still there more of the fans of the DC Universe can bask in the glory of their favorite comic art form and see more of the world that they love and also help DC to make more money off of us yeah we know !!!
One person found this helpful

Fernando J.Reviewed in the United States on October 17, 2017
5.0 out of 5 stars
Love Vixen
Verified purchase
I really enjoyed this movie. I know its based of the CW Seed Vixen. I enjoyed the plot, hopefully when s3 of the show comes out, they are longer that way next time we more for the next blu ray dvd. I love Vixen and what they did for her character. People who have been waiting for Video will not dissapointed and I like the cameo of other CW arrowverse of animated characters
One person found this helpful

Lee DowdyReviewed in the United States on August 2, 2020
3.0 out of 5 stars
Meh...
Verified purchase
I am really getting tired of these movies. They are force feeding a PC narrative that has become tiresome to say the least. The film felt unfinished and her being a lesbian felt forced on the viewer. I felt it should have been more natural.
One person found this helpful
See all reviews
Back to top
Get to Know Us
Make Money with Us
Amazon Payment Products
Let Us Help You
EnglishChoose a language for shopping. United StatesChoose a country/region for shopping.
© 1996-2021, Amazon.com, Inc. or its affiliates