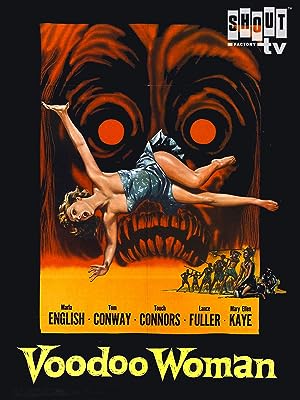 James C SmithReviewed in the United States on January 30, 2021
3.0 out of 5 stars
The She-Creature, Part 2
Verified purchase
AMAZON PRIME VIDEO

For old movies like this, the quality on Prime is typically marginal at best. However, on this film, the picture and sound quality were absolutely superb. As a fan of the '50s sci-fi genre, even though I wasn't wild about this film, for the print quality alone, I'd pick this up if they mastered it to Blu-ray.

Now as for the story, it was fine, but tended to drag a bit, and overall is nothing to write home about. In more than one way, it was a spinoff of "The She-Creature", which I greatly enjoyed. It even starred the same lead actress (Marla English) who transforms into a very similar looking, hideous, murderous beast. In fact, the same gentleman, Paul Blaisdell, designed and played the creatures for both films, as well as creating the effects for many more of my favorites like "Day the World Ended", "Beast with a 1,000,000 Eyes", and "From Hell It Came".

We also get a good and welcomed dose of Mike "Touch" Connors, later of TV's Mannix fame. I also like the French saloon owner (Paul Dubov) who also starred in "Day the World Ended" along again with Connors.

For any fan of this genre, I would definitely recommend seeing this at least once, particularly given the A/V quality of the source material.

EinsatzReviewed in the United States on October 23, 2019
3.0 out of 5 stars
“I knew you were poison the minute I laid eyes on you.”
Verified purchase
A petite killer kills her way through life, getting what she wants. What she wants is gold, jewels, whatever you’ve got. She schemes her way into a treasure hunt guided by dimwitted Ted (Mike Connors). They are headed into Voodoo country, which is dangerous, could be deadly, but menacing Marilyn (Marla English) laughs in the face of danger! Meanwhile, there’s a crazy-mad scientist (Tom Conway) experimenting on a woman, hoping to turn her into a monster that he can control with his beastly big mind. Two worlds are about to collide as one schemer tries to out scheme the other.

Graeme SmithReviewed in the United States on April 19, 2021
2.0 out of 5 stars
Silly, but Marla English does a good job
Verified purchase
Forgettable trash about a mad doctor using voodoo and science to turn a woman into a monster. Weak ending in which the villainess just stumbles into a pit of dry ice mist and dies. Or does she??? Kind of amusing in that it contains three alumni from the previous year's The She-Creature (four if you count the monster costume). I must say, though, Marla English makes a pretty decent heavy.

Ann JamesReviewed in the United States on May 19, 2021
5.0 out of 5 stars
Super Cool Old Horror Flick
Verified purchase
Awesome flick! Pulled me in. Seemed almost current even though from the 50s. Pulpy Quinton Tarantino like if you use your imagination. Lead dark haired female is tough and resembles Liz Taylor.

pattiJReviewed in the United States on October 23, 2019
3.0 out of 5 stars
Kinda fun
Verified purchase
This movie raises a lot of questions. Like, Hey, is this The She Creature? Is that Mannix? Were they Really hoping for a sequel? And What is that on the bad guy's head?? Kinda fun. 3 stars.

bonnie deanReviewed in the United States on October 26, 2018
5.0 out of 5 stars
I liked it.
Verified purchase
I only paid 19.99 for mine. I had never seen it before and really enjoyed. But than I really love those old 50's horror movies. Conway was a slight over weight. He as usual really put himself into the part. Picture and sound were good.

RicardoReviewed in the United States on February 11, 2013
3.0 out of 5 stars
Dark Jungle
Verified purchase
The movie was to dark to view.
I could not see the Monster clearly.
Not too much action, just talking.
2 people found this helpful

Lawrance BernaboReviewed in the United States on November 9, 2002
3.0 out of 5 stars
Bad Mad Scientist in Jungle B-Movie awaits your scorn
"Voodoo Woman" is the story of a woman who has voodoo done to her rather than being about a woman who does voodoo. Not that this makes a whit of difference in the end is you stumble across this bad B-movie from 1957 which is just begging for MST3K treatment. Deep in the jungles of Africa Dr. Roland Gerard (Tom Conway) is living with a voodoo tribe where he is trying to use voodoo and modern science to create an army of monsters with which to conquer the world. When a group of treasure seekers stumble onto the camp. the good doctor decides that Marilyn Blanchard (Marla English) should benefit from his next experiment. You see, it seems that voodoo is like hypnotism and Gerard cannot make the native girl (Jean Davis) he injected with his serum do things she would not have done when her mind is her own. Fortunately Marilyn has already killed somebody in this movie (and he did not even have to beg) so she should be an improvement. Besides, the doctor's wife Susan (Mary Ellen Kay), thinks he is insane. No love there anymore it seems and the whole idea is to create creatures who will obey the doctor's every whim. Experimenting on these women must be practice, for when he creates his army of, one would assume, MALE zombies. Besides, Marilyn is not only evil, but stupid. The doctor talks her into going under the voodoo spell to become the tribe's high priestess at which point she would be able to take all their gold away (hey, SHE is the one that thinks this makes sense).
"Voodoo Woman" is directed by Edward L. Cahn, who had already brought us "Creature with an Atom Brain" and was gearing up for "Invasion of the Saucer Men" and " It! The Terror From Beyond Space." Screenplay credit goes to Russ Bender and V.I. Voss; my suspicion is the latter gets the blame for the really, really dreadful dialogue as this film is Voss' sole credit. "Voodoo Woman" is clearly a film that is so jaw droppingly bad it is enjoyable as a bad film and I appreciated the ending where the natives decide they have had enough of this nonsense. Plus you have Mike "Touch" Connors as the manly Ted Bronson, still ten years away from fame on the tube as "Mannix." I have discovered this film was remade as "Curse of the Swamp Creature" in 1966 with John Agar, but this time set in the swamps of Texas (?). Finally, the monster in this film is the same one from Cahn's 1957 film "The She Creature," except this time it is wearing a blonde wig. You just cannot make this stuff up, boys and girls.
8 people found this helpful
See all reviews
Back to top
Get to Know Us
Make Money with Us
Amazon Payment Products
Let Us Help You
EnglishChoose a language for shopping. United StatesChoose a country/region for shopping.
© 1996-2022, Amazon.com, Inc. or its affiliates