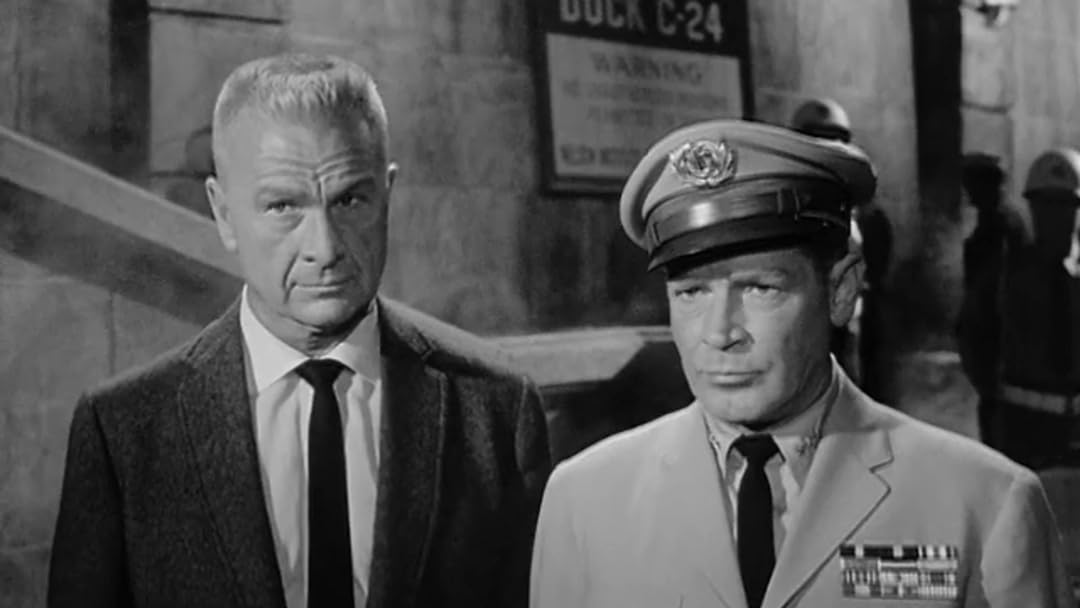 Voyage to the Bottom of the Sea

Season 1
(433)
7.21965ALL
Join Admiral Harriman Nelson, Commander Lee Crane and the crew of the Seaview as they venture through a breathtaking undersea world in Irwin Allen's action-packed TV classic where science-fiction adventure meets espionage thriller!

KeithReviewed in the United States on January 24, 2020
1.0 out of 5 stars
Only season one? Don’t bother starting to watch.
Verified purchase
I loved the series from the 1960s but after watching season one I was very disappointed that Prime did not offer the other 4 seasons.
Really Prime why do I want to spend $80 to buy a whole DVD collection to watch the entire seasons.? What’s the point of having prime if that’s what you’re gonna do?
8 people found this helpful

Keri TeachReviewed in the United States on December 20, 2013
5.0 out of 5 stars
Voyage Season 1
Verified purchase
This was the best season of Voyage To The Bottom Of The Sea starring Richard Basehart a hugely underrated American actor who has performed on stage, screen, and many guest starring dramatic roles on various TV series, movies made for TV, specials, and also has narrated many outstanding documentaries and has a career that spans from the 1940's until his passing September of 1984. The stories in the first two seasons were taught, gritty, with many of the episodes involving cold war espionage and a few aliens and undersea monsters tossed in here and there. Seasons 3 and 4 contained more monsters and aliens and centered more on fantasy. This was a show that was geared for all ages. Voyage To The Bottom Of The Sea has been around since it originally aired on ABC on September 14, 1964 and has been run on many networks in syndication since it went off the air in 1968. All 110 episodes have also been released on DVD which I also own and I recently decided to buy season 1 on instant stream to go along with the other TV series and movies I have in my video library. I like the convenience of instant stream videos because I don't have to get up to change DVD's. I only have one negative thing to say about this and that is why seasons 2, 3, and 4 are not available on instant stream. I would like to see the rest of the series be made available in this format. It saves the wear and tear on my DVD's. Unfortunately FOX released Voyage on double sided DVD's and those don't seem to hold up well with a lot of use. I really wish FOX had not skimped on the quality of the DVD's for this and other series they have released on double sided DVD's. I believe there will come a time when everything will be on instant stream and there won't be any more DVD's to hassle with.
12 people found this helpful

Reginald D. GarrardReviewed in the United States on September 19, 2007
4.0 out of 5 stars
'S'more than just the "monster-of-the-week"
Verified purchase
Irwin Allen's sci-fi classic has received its share of both praise and condemnation. While the show showcased impressive 60's special effects, along with the stellar performances of stars Richard Basehart ("Admiral Nelson") and David Hedison (Captain Crane), it was often criticized for its over-the-top monsters and occasionally absurd situations.

However, when viewed as a reflection of its time, the show carefully blended all its elements into an entertaining and adventurous hour. The thirteen episodes on this compilation feature some of the series' strongest episodes, along with a couple that fall flat. But, even those that aren't up to par are still fascinating enough to hold the viewer's interest and can be overlooked for their scientific and/or logical "liberties."

The episodes appear in their correct airing order, and, with that arrangement, viewers can take a nostalgic trip back in time to days of less "politically correct" and more innocent times.

This reviewer feels that the show's third season should have started with "The Day the World Ended," a taut and thrilling episode featuring former child actor Skip Homeier as a U.S. Senator that's not all he's cracked up to be. Unfortunately, the season began with "Monster from the Inferno," a not-so-bad installment about an alien entity (voiced by "Lost in Space's" Dick Trufeld) that attempts to take over the Seaview with the aide of scientist Arthur Hill.

"The Thing from Inner Space," though not that good, does give significant screen time to cast member Paul Trinka as "Crewman Patterson." Perennial fan favorite Del Monroe ("Kowalski") continues to play a significant role on the show and gets highlighted on "Deadly Waters," with Don Gordon featured as his brother.

Richard Bull continues in his role as the unnamed but much-needed "Doc."

Even radio operator "Sparks" (Arch Whiting) has more than five lines in a given installment.

Upon back-to-back viewing, one discovers that crewman "Ron" (Ron Stein) was an early version of "Star Trek: Deep Space Nine's" Morn; that is, a character that is voiceless but appears frequently in the background.

"Ron" even gets addressed in one installment!

"The Lost Bomb" is a throwback to the first season in that it deals with an undersea conflict with an enemy submarine intent on capturing a submerged bomb.

Basehart gets to assay two roles in the entertaining "The Haunted Submarine" while "The Terrible Toys" features veteran Paul Fix as a sailor with a malevolent cargo.

The infamous and often-lambasted "The Plant Man" starts strong but loses steam when the plant mutates into plant "men" walking the corridors of the Seaview.

But it is still better than the remaining two.

Henry Jones, who would later appear as "Mr. Pem" in two installments, guests on the lackluster "Night of Terror" while Charles Aidman bears his fangs in "Werewolf," two of the weakest in the show's entire four-year run.

Rounding out the set are interviews with David Hedison, still galleries, and a FULL issue of the now-defunct Gold Key comic version of the show.

Memories abound as baby boomers and future fans can take another "Voyage to the Bottom of the Sea."

John-Michel KaneReviewed in the United States on January 13, 2022
3.0 out of 5 stars
I could...
Verified purchase
...point out a dozen technical goofs I saw in the first episode or how those big windows on the front of the Seaview would collapse before it submerged a hundred feet or how the sub seems to constantly be losing air out the bottom. Instead, I will say that it's early 60s nostalgic adventure.

MauriceReviewed in the United States on March 9, 2016
5.0 out of 5 stars
Childhood Favorite
Verified purchase
I remember watching this TV show as a child and being very fascinated with the cool submarine Seaview and its underwater exploits. Its nice to relive these fond memories as well as to have a better understanding of the episode. I never have to worry about language, sex, or offensive material either. That is especially nice when grandkids are around. I really appreciate the option of viewing what you want to watch rather than what a network or particular channel wants. This is a fun, enjoyable, and relaxing series.

submarinerReviewed in the United States on August 20, 2012
4.0 out of 5 stars
You know you're getting old!
Verified purchase
I'm a bus driver. One day on a long trip we were playing movie trivia and I asked who was the Capt. of the Starship Entertprise. All the kids shouted Jean Luc Picard! HUH? I knew I was old. Well weekly I ask folks about the greatest undersea television series based on a great movie by the same name VOYAGE TO THE BOTTOM OF THE SEA AND i get that 4 letter answer. What?First of all ANYTHING by Irwin Allen is something great to watch. The undersea George Lucas of his day. Now the secret is AVOID SEASON ONE. It's horrible. But seasons 2,3,&4 you've gotta see.I'll bet a lot of folks give up after season 1. Skip it unless you crave black & white and espionage plots. But if you like monsters and action the last 3 seasons are your cup of tea.And hey new generation. You,ve got your own submarine series starting this fall, LAST RESORT. I can't wait.
2 people found this helpful

NamaeReviewed in the United States on October 1, 2019
5.0 out of 5 stars
Great having the 1st Season on Kindle. Would like Seasons 2 - 4 for Kindle too.
Verified purchase
Love the Amazon Video Version of Season 1 which I can take anywhere on Kindle. I did purchase all 4 Seasons on DVD, but it isn't as convenient. Wish Amazon had Seasons 2 - 4 as it is hard taking DVDs anywhere except home. If Amazon did have the rest of the Seasons, I would buy them even if I have the DVDs.
One person found this helpful
See all reviews
Back to top
Get to Know Us
Make Money with Us
Amazon Payment Products
Let Us Help You
EnglishChoose a language for shopping. United StatesChoose a country/region for shopping.
© 1996-2022, Amazon.com, Inc. or its affiliates