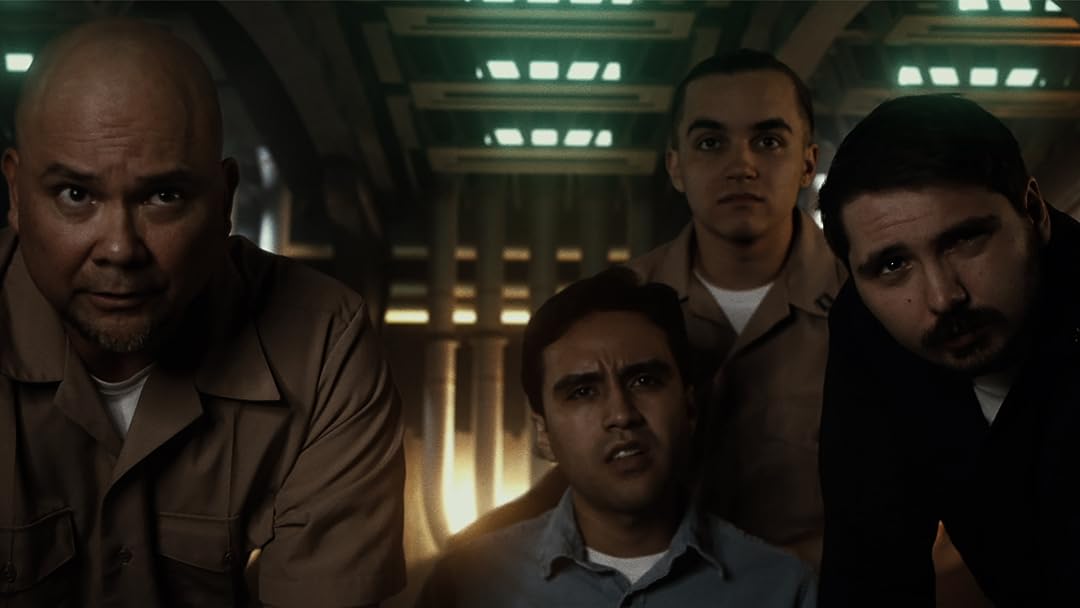 Voyage Of The Chimera

(95)
3.91 h 24 min202113+
Civilian aristocrat Marcus DeVol enters military service on a purchased commission as captain of Chimera - a battered, old destroyer with a bottom-dollar crew. Marcus must lead his crew despite his youth, inexperience, and self doubt in this sci-fi drama.

Leanda D.Reviewed in the United States on September 30, 2021
4.0 out of 5 stars
Micro-budget, "hand-made" film, much better than I expected
Verified purchase
I started this movie expecting to shut it off shortly after due to made acting, poor camera work, or some other aspect that plagues starting filmmakers. While the acting needed a lot of work, the set was great, the story kept me engaged, and I really look forward to part 2. This movie is a 3 star movie, with an added star for lack of experience from the filmmakers and the low budget. Those two thing should have tanked this film, but the studio did an excellent job with what they had. Fix the acting and this movie would be 4 stars easy.

The "rag-tag crew" aspect really helped with the poor acting, you allow more mistakes thinking that these people are inexperienced. The CGI was pretty good, especially considering the budget, and that one man did it in his basement. There were a few times in the beginning where I noticed the green screen aspect, but as I got used to it, I forgot, and got immersed in the story. If you want to support a talented group starting off, I highly recommend this film.

Kindle CustomerReviewed in the United States on August 13, 2021
4.0 out of 5 stars
Better than I expected
Verified purchase
3.5 stars. I went in with low expectations, and was pleasantly surprised. I'm strongly reminded of a couple of old WW2 destroyer vs Uboat movies, in a good way. Granted, it is low budget, but they did a lot with the little money they had. Acting varies from good to mediocre, F/X mostly decent. As a fan of the Honor Harrington books I liked the plot.
If you like space and military sci-fi and accept that it is a low budget show, you will probably enjoy it as I did.
Incidentally this was made as a tv show in 7 episodes, which are combined here in a movie format encompassing the first season. I hope they made a sequel.

Maurice F. CalerReviewed in the United States on July 1, 2021
2.0 out of 5 stars
Watchable but disappointing ending
Verified purchase
I wish that it was easier to tell when a movie is written with the intent of a sequel to finish the open ending. This had just enough to keep me watching. The acting and dialog were periodically problematic. And there was lot of uninteresting conversations which seemed intended to pad the runtime. Honestly, they could have shaved some of the dialog so that they could tell a better story with a more satisfactory ending. I would have stopped watching this if I knew that it would abruptly end. The parts which seemed OK weren't enough to compensate for the bad dialog AND bad ending.
One person found this helpful

Orman CuppReviewed in the United States on August 2, 2021
4.0 out of 5 stars
Good story line, keeps you interested in finding out what's coming next.
Verified purchase
Watched the whole first season/movie and thought it was really good. Descent acting and good special effects which really surprised me when I read they did the whole thing on a shoe string budget of $20,000. I've seen Hollywood spend millions of dollars on a movie/series and not get anything near as good. Good directing/production too. Looking forward to the next installment, hopefully another movie.
3 people found this helpful

pcsnakeReviewed in the United States on October 15, 2021
2.0 out of 5 stars
Worse than I expected
Verified purchase
Nah not this one. It starts out as a bunch of guys in a room talking as they do battle in space.
They show intermittent pictures of a model ship as they discuss the battle as though it were
a social event. I couldn't watch much more so maybe there was a movie following this initial waste
of time--I no longer cared and quit watching. I don't recommend this insult.
One person found this helpful

Jacob KimbleReviewed in the United States on July 17, 2021
5.0 out of 5 stars
Novel, and interesting, made to have a sequel
Verified purchase
The positives are that the movie is clean and builds several of the characters fairly quickly. A lot of the chatter between crew members seems realistic. I saw some interesting new twists on technology. I gave it a 5 mostly because so many people underrated it and I expect the quality to rise with any sequel and also many people don't seem to understand the concept of "to be continued". This is a great start to a possible series.

The negatives are that some of the actors seem a bit green - almost like they are used to acting in plays. I've seen that with other series also though and the actors and cast improve with each episode - hopefully that will happen here if we see a sequel. The captain is a bit too sulky - I know its part of his character and dealing with his families misfortunes but it might come across better if he leaned more towards being introspective.
2 people found this helpful

Just a Guy Who Likes Good MoviesReviewed in the United States on October 11, 2021
1.0 out of 5 stars
Maybe it's not a bad concept, but......
Verified purchase
The acting was so bad I could not finish this thing. It seems like a good concept. Been done, of course. Dune had the various "Houses." The Expanse has the various alliances. Dark Matter had the intergalactic corporations. Still, it could be done again. But, God save me, this "acting" is so extremely bad it can't be tolerated. Rewrite the script. See if an agent can get professionals to make a movie out of it.
One person found this helpful

Daniel A KelleyReviewed in the United States on October 24, 2021
1.0 out of 5 stars
B Movie
Verified purchase
Very disappointing. They imitated a modern Naval Warship in space, with officers and crew incredibly untrained and especially undisciplined. Characterization of military officers in the future? How offensive. Today we have Sailors and Marines who would have to consume a six-pack to stomach the theatrics. I find this film offensive by the actions of the characters in the movie. LTC ret., USMC.
One person found this helpful
See all reviews
Back to top
Get to Know Us
Make Money with Us
Amazon Payment Products
Let Us Help You
EnglishChoose a language for shopping. United StatesChoose a country/region for shopping.
© 1996-2021, Amazon.com, Inc. or its affiliates