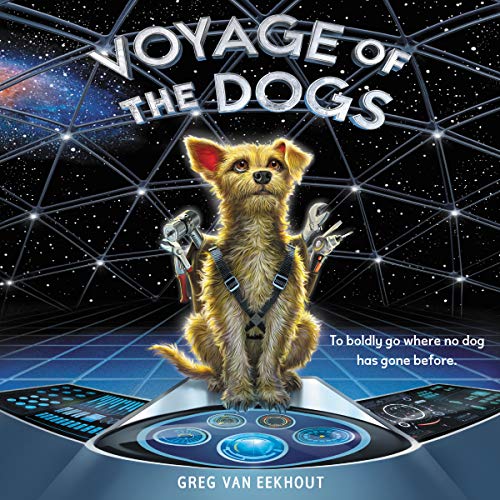 Voyage of the Dogs

List Price: $20.52
You Save: $2.56 (12%)
By completing your purchase, you agree to Audible’s Conditions Of Use
Sold and delivered by Audible, an Amazon company
Share

4.8 out of 5 stars
4.8 out of 5
260 global ratings
How are ratings calculated?
To calculate the overall star rating and percentage breakdown by star, we don’t use a simple average. Instead, our system considers things like how recent a review is and if the reviewer bought the item on Amazon. It also analyzes reviews to verify trustworthiness.

Elisabeth Carey
4.0 out of 5 stars A fun and rewarding story about dog heroes in space
Reviewed in the United States on September 7, 2018
Verified Purchase
I'll just say this up front, because I'm one of the people for whom this is important: No dogs die in this book. We do get the story of Laika*, told by one of the dogs to the others so that, at a critical point, they can make an informed choice, but Greg Van Eekhout kills none of his fictional dogs in the course of this story.

Lopside, Bug, Daisy, and their pack leader, Golden retriever Champion, are Barkonauts, dogs specially trained and equipped to be part of the crew of Laika, the first Earth ship to head out to start a colony on an alien world in a distant solar system. There are four human crew as well, and we only meet two of them before one, Roro, helps the dogs into hibernation for the FTL portion of their travels.

When the dogs wake up, the humans are gone, having taken the lifepod, and the ship is badly damaged.

They're on the outskirts of their destination star system, but with with the ship's drives not working, too far from their destination planet, Stepping Stone. The dogs struggle to make repairs. They manage to redirect the communication antenna, and send a call for help to Earth.

There are real personalities at work. There is both conflict and cooperation among the dogs. Lopside, a little terrier mix, the only non-purebred, is our viewpoint character. From time to time he reminds us that unlike the others, he wasn't bred to please everyone. (Champion's a Golden, Bug is a Corgi, Daisy a Great Dane puppy. All bred to work with people, not to consider people's opinions and then make their own decisions.)

Looming over their efforts is the name of the ship, Laika. They know Laika was the first dog in space, the very first Barkonaut, but for some reason, her story is missing from The Great Book of Dogs, the book Roro read to them, full of the stories of heroic dogs. Lopside really wants to know that story. He's sure it would help inspire them to even greater heroism and ingenuity.

But with or without the story of Laika, these dogs love their people and their jobs, and are determined to succeed They don't quit. They don't fail.

This is a very satisfying story.

I bought this book.

*Considering how long it's been, and how much younger than me are the people raising young children today, I think I have to say outright what Laika's story is. She was the first dog in space, yes. She went up in Sputnik 2, on November 3, 1957. There was never a plan to bring her back, but she died within hours, when a malfunction caused the Sputnik cabin to overheat. This was the result of the Soviet space program taking barely four weeks to design Sputnik 2, and that wasn't enough time to make a reliable temperature control system for Laika. Laika's story is one of humans behaving badly. Greg Van Eekhout, on the other hand, is a good human, who gets well-deserved cuddles from his dogs.
Read more
11 people found this helpful
Helpful
Report abuse

Angie Boyter
TOP 1000 REVIEWERVINE VOICE
5.0 out of 5 stars A charming SF book for all ages! A wonderful change from dystopic SF
Reviewed in the United States on October 7, 2018
Verified Purchase
Who could resist a book about a spaceship full of dogs, abandoned by the human crew and determined to save themselves and their ship? It was an outrageously cute idea, but could it succeed without being downright silly? The answer is a resounding Yes, and Voyage of the Dogs delivers a delightful read for both young people and adults.
The spaceship Laika carries a small group of “barkonauts” among its crew to keep down any vermin that have stowed aboard and, more important, to provide companionship after the ship arrives at the new planet, Stepping Stone, where everyone would be homesteading. When engine problems cause the humans to abandon ship, the dogs vow to save themselves and complete their mission. The story is fun and never lags. The dogs are sympathetic and credible (well, almost). And even the science is plausible. And, (I hope this is not too much of a spoiler) there is a happy ending. Enjoy!
Read more
2 people found this helpful
Helpful
Report abuse

I. Burcham
5.0 out of 5 stars Nice Idea
Reviewed in the United States on November 28, 2018
Verified Purchase
This is the sweetest book I've read in a long time. It is really a children's book, but it is more a book that an adult would read to a child. As a lover of dogs I enjoyed the concept that we will be able to take dogs into space if we ever get off this planet. I learned a lot about the first dog in space, Laika.
Read more

5.0 out of 5 stars Nice Idea
By I. Burcham on November 28, 2018
This is the sweetest book I've read in a long time. It is really a children's book, but it is more a book that an adult would read to a child. As a lover of dogs I enjoyed the concept that we will be able to take dogs into space if we ever get off this planet. I learned a lot about the first dog in space, Laika.
Images in this review

Jay Matthews
5.0 out of 5 stars Entertaining and engaging read
Reviewed in the United States on April 28, 2019
Verified Purchase
My daughter, who is in 3rd grade, absolutely loves this book. She can't put it down. She reads it over and over.

Kindle Customer
4.0 out of 5 stars What fun!
Reviewed in the United States on October 22, 2019
Verified Purchase
This is a sweet book, full of very good dogs. I mean, dogs in space! Intelligent dogs, bred and modified to assist humans on spaceships, and full of the empathy dogs already have. An exciting and engrossing piece of sci fi.
Read more
Helpful
Report abuse

S. Rollin
5.0 out of 5 stars My 9 year old and I loved it!
Reviewed in the United States on September 29, 2019
Verified Purchase
Ordered for my son's school "book club". He has dyslexia, so I read it to him. We both couldn't wait to find out what would happen next! Since it was told from a dog's perspective, I (who am not a "dog person") feel like I learned to have more sympathy for dogs, and I have a little more insight into their behavior.
Read more
Helpful
Report abuse

J. E. Gjevre
5.0 out of 5 stars Sweet and uplifting
Reviewed in the United States on January 25, 2019
Verified Purchase
You know that tragic story of Laika the space dog has got under your skin when you read a sweet and uplifting children's book that references it and you cry and cry, even though there's a happy ending.
Read more
Helpful
Report abuse

Anna-Maria L. Crum
5.0 out of 5 stars Fantastic adventure story about dogs in space.
Reviewed in the United States on April 13, 2021
Verified Purchase
The 4 dogs awake from hibernation to discover their human crew had vanished. But the dogs had their mission to complete. Somehow they had to survive and make it to the new planet and find out what happened to the crew.
Read more
Helpful
Report abuse
See all reviews

Susan Stepney
3.0 out of 5 stars I have a couple of problems with the world building
Reviewed in the United Kingdom on January 1, 2021
Verified Purchase
In the future, dogs have been bred to human-like intelligence levels. Four of these dogs have qualified as Barkonauts, crew assistants on the starship Laika, on its way to colonise another planet. But something goes wrong, and the Barkonauts wake from cold sleep alone on a damaged spaceship. They have been left to die, but they are determined to complete their mission.

This is a children’s book, and is a quick read. The dogs are very doggy, and also very resourceful. They are typically loyal, too, although that does take a dent when they eventually learn the story of the original space-faring Laika. It’s a rather insensitive name for a spaceship with dog crew, really.

Despite the good dogs, I have a couple of problems with the world building. First, if the dogs really do have the stated intelligence (which they must, given the way they communicate with the humans, and the later repairs they effect), then the backstory of Lopside’s early life is more horrifying than sad. Second, just how do they manage to effect those repairs? There is a lot of pushing buttons with noses and paws, but no mention of thumbs, or dexterity, or other support for manipulating the machinery. All this kept nagging at me as I read the otherwise engaging story of dog-kind overcoming adversity.
Read more
Report abuse

shiv
5.0 out of 5 stars A lovely cheering story
Reviewed in the United Kingdom on September 9, 2018
Verified Purchase
About the importance of pack. It’s delightful and I read it all at one sitting.

Highly recommend. Give it a try
Read more
Report abuse

david hofer
3.0 out of 5 stars Not a book for older people
Reviewed in Canada on October 13, 2018
Verified Purchase
Bought by accident
Touched the screen by mistake
Could not cancel on the phone
Read the book just for fun and actually enjoyed it
Writing is for 12 year old
Read more
Report abuse
See all reviews
Back to top
Get to Know Us
Make Money with Us
Amazon Payment Products
Let Us Help You
EnglishChoose a language for shopping. United StatesChoose a country/region for shopping.
© 1996-2021, Amazon.com, Inc. or its affiliates