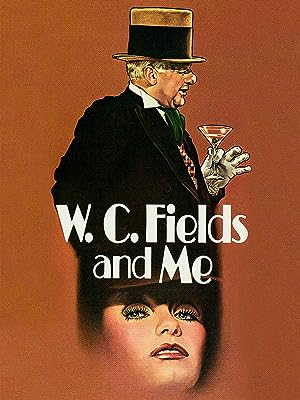 W.C Fields and Me

Argiod SilvertongueReviewed in the United States on August 6, 2014
5.0 out of 5 stars
Steiger totally amazed me with this magnificent performance...
Verified purchase
Thank You Amazon.

I saw the film in the movie house when it first came out.

I went to see it, mostly to watch Steiger fall on his face.
Here's a guy who never played a lick of comedy in his career; and he was going to take on the Great W.C.

About five minutes into the film, I was no longer aware of Steiger's presence... so well did he invoke the very spirit of Fields.

It was as if the great Fields had come back to play himself.

Thank you again, Amazon. Thank you for letting me have this precious memory from the best years of my life.

The other piece of that time was "Masterless Samurai" by Osamu Kitajima; which you offered a few years back.

Jack BuckleyReviewed in the United States on August 9, 2015
4.0 out of 5 stars
Steiger Soars as Fields
Verified purchase
All fans of Hollywood's greatest curmudgeon should enjoy this biographical film on W.C. Fields, born William Claude Dukenfield in 1880. Rod Steiger is superb as the juggling vaudeville star who eventually arrived in Hollywood during the silent era and moved up into talking features, showcasing his unique brand of comedy--mumbling dialogue and asides, thoroughly henpecked, and making no secret of his dislike for children and animals.
There are moments in the film where one can swear they're looking at the real Fields. Steiger also maintains the comedian's unique voice and inflections throughout, which probably wasn't easy. Some scenes recreate the set of his actual movies and characters. In a pre-CGI era(1970's), the movie recreates early Hollywood quite convincingly, with historic cars and period clothing. For those enamored of early 20th-century Hollywood(teens through 20's and 30's), it's a fun immersion, with occasional references to Jolson and Chaplin, too. One early scene, for example, set in a New York City movie theater, shows an audience laughing at real Chaplin footage. The film actually begins with the pre-Hollywood Fields on the vaudeville stage in New York City, where he's performing the famously racy dentist's office routine.
The movie is based on the memoirs of W.C.'s mistress, Carlotta Monti, played by Valerie Perrine, who's quite effective in the role. Fields' career wasn't all laughter, though. He had a dark side as well, and could be petty and mean-spirited at times, often fueled by an ever-increasing over-reliance on alcohol.
The movie follows the cinema's grandest comedian up through his death, which occurred on Christmas Day of 1946. Carlotta's at his bedside in a touching scene. Although Steiger compellingly portrays Mr. Fields' less admirable qualities, one comes away from the movie both moved and saddened by his untimely end.
In short, "W.C. Fields and Me" is the greatest recreation of the man's life that's ever been put on film.
3 people found this helpful
Report abuse

J. BrewsterReviewed in the United States on July 18, 2017
5.0 out of 5 stars
Hidden Gem
Verified purchase
What a wonderful movie this was. Rod Steiger is just amazing as Fields - showing a real human side, not the on-screen caricature we know and love (although he does that as well). The movie was released in theaters but has a "made for TV" look, but that doesn't hurt it. My only complaint is I wish it had been a half hour or 45 minutes longer.
2 people found this helpful
Report abuse

Thomas KilbrideReviewed in the United States on August 15, 2016
4.0 out of 5 stars
Not great movies, but wonderful looks at great entertainers.
Verified purchase
Saw this movie in a theater 40 years ago and was pleased it finally was available again. Been a fan of Fields since I was a kid and although this biopic is fictionalized, I enjoyed seeing it again. From the same year and studio is "Gable and Lombard." Recommend both for those interested in the old Hollywood. I had forgotten Billy Barty was in the Fields movie.
One person found this helpful
Report abuse

PDTReviewed in the United States on August 10, 2019
5.0 out of 5 stars
Comedy Actor Gets His Movie
Verified purchase
I am not sure how true this is but Stieger does a nice job. Movie is old. Has good pacing. Like Gloria Graham book and movie, it is one-sided.
Report abuse

Roy HobbsReviewed in the United States on January 25, 2017
4.0 out of 5 stars
Another Great Rod Steiger Performance
Verified purchase
Rod Steiger puts on a remarkable performance as WC Fields and the supporting cast is excellent. I cannot imagine anyone not enjoying this wonderful movie about one of the greatest film stars in early movie history.
One person found this helpful
Report abuse