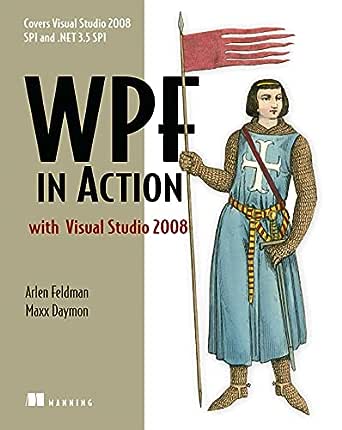 Flip to back Flip to front
Audible Sample Playing... Paused   You are listening to a sample of the Audible narration for this Kindle book.
Learn more
ISBN-13: 978-1933988221
ISBN-10: 1933988223
Why is ISBN important?
ISBN
This bar-code number lets you verify that you're getting exactly the right version or edition of a book. The 13-digit and 10-digit formats both work.

Now more than ever, Windows applications have to work well and look good. Windows Presentation Foundation (WPF), Microsoft's new user interface framework, gives you the ability to create stunning graphics, rich interactions, and highly-usable Windows applications. WPF is the API beneath Windows Vista interfaces, and it's also available for older versions of Windows. Up to this point, it has only been possible to build WPF applications manually, mainly by hand-coding in XAML-WPF's declarative XML-based markup language. The soon-to-be-released Visual Studio 2008 provides the full set of developer tools you need to take advantage of this exciting technology.

The combination of WPF and Visual Studio 2008 represents the start of the next generation of Windows applications. Hand-coding XAML is fine if you're an early adopter, but to put WPF into production, you need to master the tools and application styles you'll use in your day job.

WPF In Action focuses on WPF development using Visual Studio 2008 and other available tools.. The book starts with thorough coverage of the basics-layouts, styles, resources, and themes. It then takes you through several real-world scenarios, exploring common challenges and application-types. You'll build several sample applications, ranging from a simple calculator to a typical line-of-business application. Along the way, you'll add graphical elements, animation, and support for printing, accessibility, and other standard functionality.

Written in a witty, engaging style, WPF In Action can be read cover-to-cover or used to reference specific problems and issues. The approach is practical and always focused on how you'll use WPF in real development scenarios. You'll learn how to handle the many new issues presented by the extreme flexibility of WPF. The authors also provide numerous tips and suggestions for how to work efficiently.

Purchase of the print book comes with an offer of a free PDF, ePub, and Kindle eBook from Manning. Also available is all code from the book.
Read more

Arlen Feldman specializes in meta-data driven applications, particularly focusing on usability issues. He was chief architect for the award-winning HEAT software product, and has been working with .NET since its earliest days. He worked with Microsoft on the direction of .NET, the C# language and Visual Studio as a member of the C# customer advisory group. Arlen is the author of ADO.NET Programming (Manning, 2003), and is the Chief Architect for Cherwell Software.

C. Harrison
5.0 out of 5 stars Great introduction to WPF
Reviewed in the United States on November 7, 2009
Verified Purchase
While not the most in-depth book on WPF, this book covers every major feature in WPF. The authors know their audience - developers. Developers want to see a lot of code, and that's what you get in this book; a lot of code and a lot of examples. After going through this book cover to cover (which is rare for me and computer books) I had a very solid foundation on WPF to build upon.

If you're new to WPF this is your starting point.

oregon111
2.0 out of 5 stars very disappointed
Reviewed in the United States on June 21, 2012
Verified Purchase
OK. Here is the scoop from a real person - not the "marketing dept."

I bought this one, the unleashed, and the pro C# wpf books about the same time. I used this one the least. I ended up using the unleashed to get started, then switching to the pro book for more insight.

While I felt that I gave this one a fair chance, it never seemed to bond with me and the writing did not click with me.

What I wanted from this book is a tutorial on how to build some wpf apps in vs2008. I did not get that.

No wonder Amazon is selling them for pennies.
Read more
One person found this helpful
Helpful
Report abuse

Kenny Bright
3.0 out of 5 stars Not a bad book but...
Reviewed in the United States on July 21, 2009
Verified Purchase
I got this book based on the reviews but after getting to Chapter 11 (Data Binding with WPF) the authors completely lost me with their style of writing. The main reason i got the book was to learn not to copy or run their code. Am sure they are both smart guys but they both seem to get lost sometimes trying to explain the concept; my guess is that this has to do with trying to impress that they know so much.
This is the worse "In Action" book i have read to far.
Read more
One person found this helpful
Helpful
Report abuse

OnceMore
4.0 out of 5 stars Opinionated but really good book
Reviewed in the United States on January 2, 2009
According to the authors, their goal for this book is to not only teach developers how to use WPF, but more importantly, how to use it well and properly. For this reason, they offer a lot of their opinions about what they think are great and not so great about WPF as of the 3.5 SP1 Release, in comparison to Windows Forms, for example. Also, instead of just showing you the steps involved in, say, creating data bindings or animation effects, they show you how to go one or two steps further to create architecturally resilient frameworks that support easier swapping of animation effects or data access components. Divided into four parts, the book begins with a three chapter introduction that includes a historical discussion of how WPF is so different from previous UI Technology offerings from Microsoft. Part 2, consisting of Chapters 4 through 8, gets readers involved in building a calculator application and, through that process, teaches readers about controls, layouts, dependency and attached properties, events, styling and resource management. Part 3, consisting of Chapters 9 through 15, tackles data binding, graphics, and custom controls. The two lengthy chapters on data binding (Chapters 11 and 12) are, in my opinion, the best chapters in the book, covering rarely discussed topics such as MultiBindings, Priority Bindings, and current gotchas when working with results collections from LINQ queries and potential workarounds. Finally, Part 4 consists of one or two chapters each on XBAP, Printing, and Threading etc. Despite its heftiness, the book does not provide comprehensive coverage of WPF concepts; instead, the authors have carefully chosen the topics they wanted to concentrate on (for example, they provide simplified explanations of how attached and dependency properties work, choosing not to elaborate on the runtime complexities involved behind the scene). Also, the authors may be opinionated, but their rather folksy writing style makes the book an easy read.
Read more
14 people found this helpful
Helpful
Report abuse

James Ashley
4.0 out of 5 stars Excellent hands-on WPF book
Reviewed in the United States on March 4, 2009
I admire the way WPF has been presented in this book. Arlen Feldman and Maxx Daymon have done a masterful job.

The two extremes of technology books are the densely-typed reference works that make your eyes tear over and the happy-chatty books that try too hard to convince you that you are having a good time. WPF in Action steers carefully between these extremes by providing a deep understanding of the WPF technology through what are basically step-by-step tutorials that build upon each other.

WPF is a mind-bending technology that seems to defy many of the rules we are used to in the WinForm and WebForm world. This means that understanding it can only come through actual hands on coding. WPF in Action facilitates this process and leads us through the mind-set change required to truly grasp WPF.

This is an excellent work, especially when complemented with something like Matthew MacDonald's Pro WPF in C#, which is much longer on the details but shorter on practicums.
Read more
4 people found this helpful
Helpful
Report abuse

Gerard J. Murphy
3.0 out of 5 stars Started strong then ran out of steam.
Reviewed in the United States on December 12, 2009
Hastily written and poorly edited computer books have become all too common in the last decade or two. This book started out as a refreshing exception, but the authors appear to have run out of time or patience about halfway through the book.

After several requests from users on their online forum they did post the source code on their website, however the code you'll get by following along in the book varies considerably from this.

I really wanted to like this book, there aren't a lot of other titles available for this relatively new topic, but I've spent too many frustrating hours trying to follow the book from the middle chapters on and getting the code to work. ( As other users on their forum pointed out, when you're trying to learn a new subject the step-by-step approach is better than simply copying and pasting code.)
Read more
Helpful
Report abuse
See all reviews

Maciej Lisman
4.0 out of 5 stars Good start, yet not very detailed
Reviewed in the United Kingdom on February 15, 2013
Verified Purchase
Easy to read, and pretty consistent. Book contains everything you need to know to start with WPF. First you get some foundations: why WPF was created, basically comparing it with .net Windows Forms. Then author creates simple application (Calculator). What is good is that author is constantly improving that application applying new techniques from WPF. So don't get pure techincal text, but also practical working application with hints how to make it better. Because not everything can be presented on Calculator some chapters are separeted, like: Data Binding, Printing XPS, Intreoperability with Windows Forms and Threading. All in all, I would highly recommend it for beginners!
Read more
Report abuse

Mirko
5.0 out of 5 stars Good book on WPF
Reviewed in the United Kingdom on July 20, 2019
Verified Purchase
I don't use much of WPF but it is nice book to have to get overall feeling what WPF is all about.
Read more
Report abuse

Amazon Customer
4.0 out of 5 stars The best how to learn wpf type book i have come across
Reviewed in the United Kingdom on July 31, 2014
Verified Purchase
an excellent reference book take a logical approach to learning wpf witch will quickly allow you to go from nothing to programming easy.
Read more
Report abuse